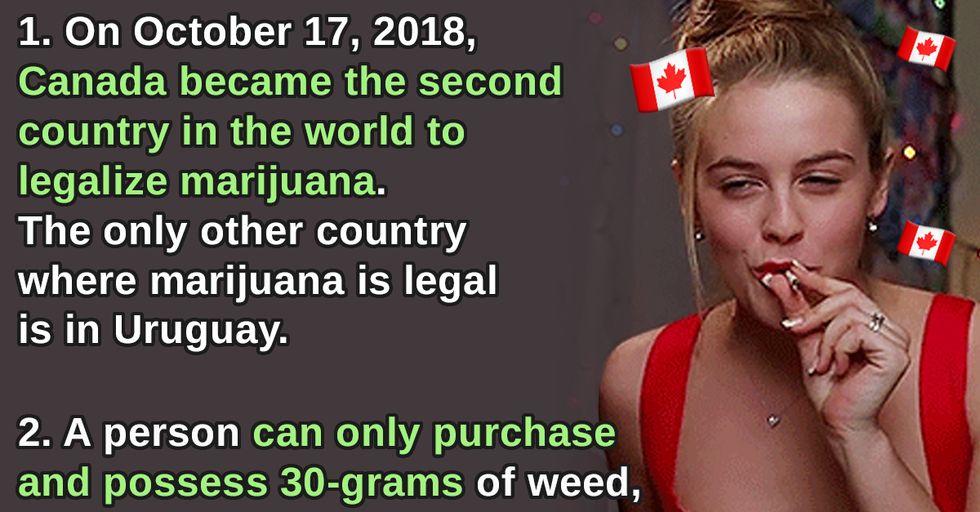 Early education taught us that weed is bad. Do you remember in school when teachers had a policeman come into your classroom to tell you about how smoking pot (even one time) could kill you? And even if the weed didn't kill you, it would get you hooked on something even worse!

Well, times have changed. It turns out smoking pot isn't quite as bad as everyone once thought. Most doctors now agree that weed is relatively safe, especially compared to alcohol, which causes thousands of deaths per year, and is legal pretty much everywhere in the world. It also turns out weed isn't exactly a "gateway drug" like the scary policemen taught us. People who smoke weed don't do more drugs than the people who smoke cigarettes or drink alcohol. Most people who try weed at some point in their lives do not end up as a regular drug user at all.

And many places around the world are starting to realize this, which is why over the summer, Canada voted on a big decision.

They passed a law that made people very happy.

On October 17, 2018, Canada became the second country in the world to legalize marijuana.

The only other country where marijuana is legal is in Uruguay.

Yep, not even in the Netherlands!

Despite what you may have heard from your friends who backpacked through Europe, and had maybe a little too good of a time munching on special brownies in Amsterdam, Pot is not legal in the Netherlands. Pot has been decriminalized for personal use only and can is consumed in coffee shops.

It was a historic move for Canada.

And a lot of people are very excited about the new change.

And they seem to be a bit sleepier and hungry most of the time.

Though, Canadians won't be able to purchase weed along with their regular groceries.

But they can buy weed from state-run stores.

And not everyone can buy pot.

In most provinces in Canada, you have to be 19-years-old to purchase marijuana and 18-years-old in others.

There are restrictions on purchasing.

A person can only purchase and possess 30-grams of weed, and they can only grow up to four plants at a time.

Canadians can now smoke pot anywhere where they are allowed to smoke cigarettes.

Except, they cannot smoke while driving.

In America, pot is still illegal.

But recreational use for adults over 21 is legal in nine states, including Washington, DC.

The Toronto Police decided to have fun with the new law.

They tweeted out some guidelines for when you should call the cops on someone who is smoking pot.

They tweeted in anticipation of people calling the cops on people smoking pot.

Asking for directions because you're lost is not a 911 call. Reporting an adult smoking a joint isn't either. Canna… https://t.co/fg1LyBeuww
— Toronto Police (@Toronto Police)1539722038.0

In an effort to remind them that it's now legal to do so and that there's no reason to contact the police department about it.

Asking police to call your friend because you are out of minutes is not a 911 call. Calling about your neighbour's… https://t.co/QtwplqyzWz
— Toronto Police (@Toronto Police)1539722345.0

These ridiculous examples of situations people had called the cops about helped showcase how silly it would be to call the cops on someone for growing marijuana.

They were really funny.

Asking what to do with your frozen meat during a power outage is not a 911 call. Smelling weed coming from your nei… https://t.co/En8QC5ZCcV
— Toronto Police (@Toronto Police)1539730591.0

It makes you wonder how often cops have to respond to insignificant 911 calls.

Some were surprised that people ever called the cops due to weed.

But, are you really surprised?

But, don't worry, there was an explanation.

@JeffGrubb @TorontoPolice It was part of the Snitches Get Double-Doubles rewards campaign. Nobody can say no to Tim Hortons
— Erron Kelly (@Erron Kelly)1539817639.0

People will do a lot of things for doughnuts.

Other people had questions.

Yep, and they're pretty dang good.

And we've got the GIFs.

It is the internet, after all.

Some people were already ready to complain.

Not everyone loves the green stuff.

Other people responded that their 911 centers also receive ridiculous calls.

OK, how big are the snakes?

People across Twitter had a lot of reactions to the new law.

Complete with funny pics, memes and clever thoughts on the situation.

People from other countries made jokes, too.

Hook your foreign family up, Canadians!

Other people had concerns.

I understand pot is legal in Canada now...but seriously...there is a time and place for it, just like alcohol; not… https://t.co/7rxfAB5tQp
— Kelsey Bretecher (@Kelsey Bretecher)1540383408.0

The smell could be a problem.

Some people had words of wisdom.

Be safe out there, guys!

Unfortunately, there may be unintended consequences for some people.

Like the poor bus driver who has to drive the 420 bus all day.

This girl is a genius.

Smart thinking, little girl. She is our future.

Some reports even say that Canada was almost out of weed only one day after legalization.

I guess people are appreciative of this new law.

It is a pretty funny concept.

And it's predictable. I wonder why no one planned ahead.

Be warned: there are many Americans who want to move there now!