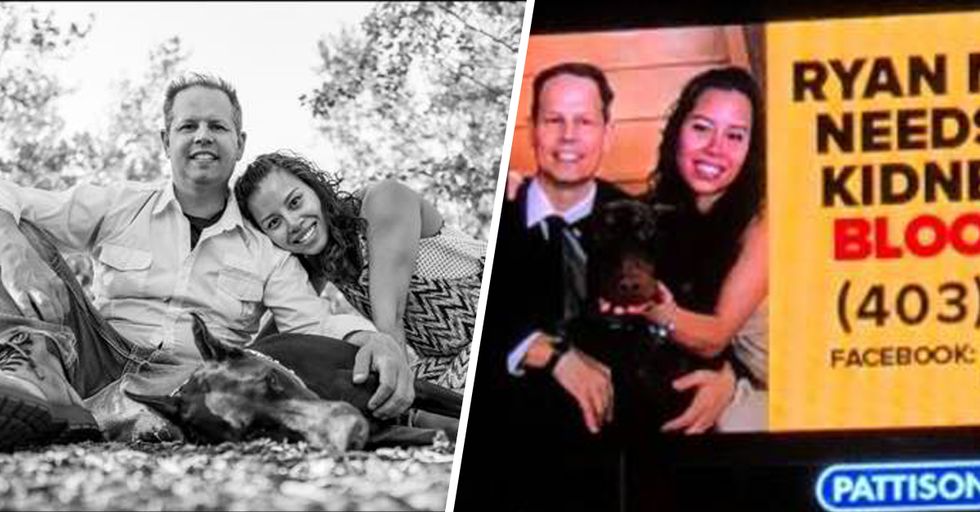 Ryan McLennan, a mid 40s high school teacher in Calgary, Canada was battling chronic kidney failure with no hope of finding a donor. As a last resort, he and his wife decided to go public with their story – very public.

Ryan decided to advertise his need for a kidney donation on billboards around town as a final attempt to save his life. He never expected the grand gesture would deliver the miracle he needed. In just nine months, his prayers were answered when a complete stranger saw the signs and rose to the occasion.

At only 28 years old, he often felt extreme levels of fatigue but assumed it was simply the result of his long hours working as a night shift mechanic.

He was shocked to learn what was causing his symptoms.

A routine physical for employees at the auto body shop where he worked revealed that Ryan had abnormally high blood pressure. After further testing, doctors determined Ryan’s kidney function was failing, and his health was in rapid decline.

With only six percent kidney function, he and his family feared the worst.

Ryan was soon incapable of continuing the physical labor that auto body repair work required. The former mechanic made a career change into teaching as a means of coping with his illness.

Ryan's mother Elaine Austin bravely donated her kidney to her son back in 2002. The transplant was deemed a success, and Ryan's health seemed to stabilize. All signs showed that Ryan had made a full recovery.

Ryan and his family moved on with their lives.

Ryan got married and continued working as a mechanic and auto-body teacher at Father Lacombe High School, winning a Teacher of the Year award in 2011. But after nearly two decades of functioning normally, Ryan’s body started to reject the kidney transplant.

Early this year he received a new diagnosis.

Doctors told Ryan that he would need a second transplant. With no other matching donors among his friends and family, it seemed as if he was out of options.

In 2017, 45 Alberta residents on the organ donation list died while waiting for a transplant. Ryan resigned himself to a life of dialysis with no end in sight. His wife, however, didn’t give up on the hope of finding a donor — by any means necessary.

This new advertising plan came together in the form of local billboards. The couple purchased 27 giant digital signs around Calgary and Edmonton to project their plea for help throughout the city.

They spread the message across two towns.

The striking black and yellow billboards featured a photo of the couple and their dog, and stated in all caps: “RYAN MCLENNAN NEEDS A LIVING KIDNEY DONOR BLOOD TYPE O." The billboard also included a phone number for potential donors to call and information on Ryan’s Facebook donation page.

Friends of the McLennans also helped get the word out.

Through a "Find A Kidney For Ryan McLennan" social media campaign and car window decal, they helped to spread his message. The McLennans welcomed the support, but remained unsure that the work would yield the outcome they hoped for.

Even with the good intentions of efforts from friends and family, Ryan found it challenging to ask for help and be seen as sick on such a large scale as his health worsened. “I just want to be like everyone else," he said in a post to Facebook followers.

The campaign put Ryan's story in the spotlight.

Notoriety from the billboards and subsequent media coverage garnered 170 total inquiries into Ryan's case. Of the 50 people who came forward to offer their kidneys for donation, 30 moved on to undergo testing.

But not one fit the bill.

Unfortunately, each and every potential donor was ultimately ruled out as incompatible for transplant by his team of doctors. After all his efforts, it seemed Ryan was back at square one.

That’s when the McLennans received a call from Tony Timmons.

Tony, a 47-year-old truck driver from a neighboring city of Airdrie, was a total stranger who had seen the billboard one morning on his way to work.

Timmons was moved by Ryan’s plight.

He called the McLennans that same day, and soon began the process of donor testing. Eventually, Tony was determined to be a match for Ryan.

Tony never had a doubt.

According to Tony, the decision to donate his kidney didn’t even require a second thought. Despite not knowing Ryan personally, he couldn’t go on without helping a man he knew to be in need.

The men shared an unexpected connection.

Even though the men themselves were total strangers, Ryan and Tony shared a tangential connection. Tony’s wife, Lisa, runs a daycare attended by the child of one of Ryan’s co-workers.

Ryan’s co-worker got wind of Tony’s decision to donate and introduced the two men. Despite the unusual circumstances surrounding their meeting, they quickly forged a friendship beyond the context of Tony’s donation.

Their meeting was a miracle.

Despite having a date set, Ryan waited to share the news with the many fans he’d gained throughout the campaign until he was confirmed healthy enough to go through with the operation.

Ryan now calls Tony a hero and a friend.

Ryan has been deeply moved by Tony’s generosity. Though many of Ryan’s friends and family didn’t have the capacity to come forward and help him in his time of need, Tony provided a kidney for him as a complete stranger.

The men and their wives have become as close as family.

The couples have been meeting for dinners and spending quality time together ahead of Ryan and Tony’s surgeries.

Tony says he hopes a stranger would do the same for him.

Tony's wife Lisa is especially proud of her husband, who she says usually tends to stay out of the spotlight. According to Lisa, this kind of selflessness is typical of Tony, who always puts others first.

Ryan says the surgery will be one of the greatest days of his life.

With his vitals holding strong Ryan says he’s remaining optimistic, and certain that he and Tony will stay healthy through their operation.

Ryan and his wife are still in disbelief.

Even as he prepares for his surgery, Ryan remains surprised that the seemingly far-fetched billboard campaign was successful in finding him a matching kidney donor. The family is immensely grateful for the show of support they received from their community.

After over a decade battling renal issues and living a significantly restricted life, Ryan is so appreciative to be getting what he calls a "third chance" with his second kidney transplant.

He's can't wait to get back to work.

After he’s had adequate time to recover from the operation, Ryan has plans to return to the classroom and continue working in the high school auto body shop with students.

Likewise, Tony plans to take off some time to heal as well.

Though doctors have advised him to abstain from truck driving work for three months, Tony predicts he’ll be back on the road sooner.

Ryan and Tony expressed that the experience has given them a fresh perspective on the world.

Despite having seen some lows during the process, Ryan can only express gratitude at Tony's willingness to give him such a gift.

Ryan says he has supporters to thank for giving him hope.

In a Facebook post announcing his surgery to his many followers and friends, Ryan called Tony an amazing person and thanked his community for rallying around him throughout the long journey. “This process has changed me. It has made me see the light and what is important," he said.