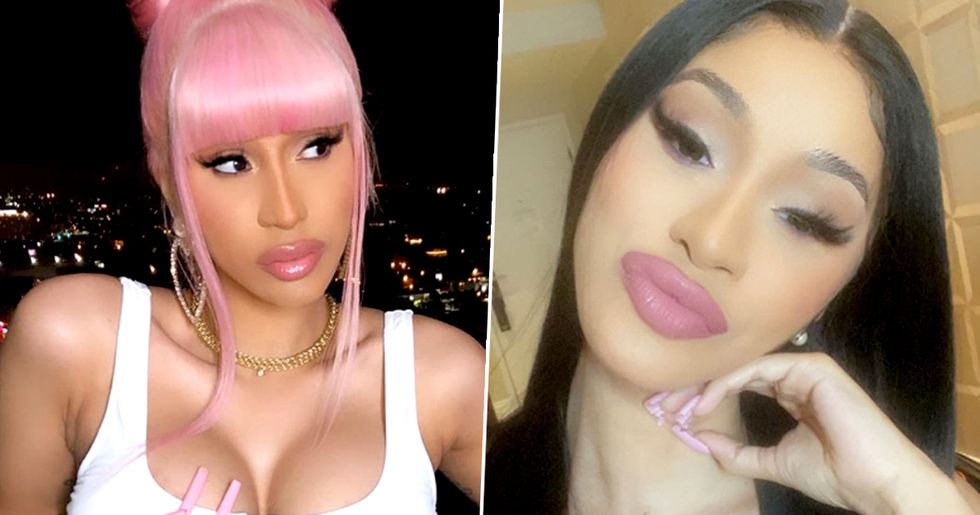 We all know Cardi B as the fun-loving, outspoken and hugely successful hip-hop rapper.

Cardi is well known for a lot of things! And one of them is certainly her image.

But it's taken quite the change recently - after the star revealed a huge new back tattoo!

We all know and love Cardi B for her no-nonsense approach to life...

She's constantly entertaining fans via her social media accounts, and updating us on her daily life.

There's no doubt, she is hugely successful...

And she has been named as one of the most popular female rap artists of our generation.

But Cardi had a pretty difficult start in life...

Born in the Bronx, NY, Cardi (her real name is Belcalis Almanzar) came from a life of domestic violence and poverty and had to resort to stripping aged nineteen to make ends meet. "The first time I stripped I was really embarrassed, I felt like I could hear my parents voice in my head," she told ID magazine last year. "After a while, I didn't even care anymore. I was seeing the money that I feel like I would've never seen ever."

But alongside her stripping...

Cardi would be a very popular social media presence and she would regularly upload music videos of herself to Vine and Instagram. Keep scrolling to read her worrying Twitter post...

But after 2 seasons, Cardi announced that she would be leaving the show to pursue a career in music - the thing she was truly passionate about.

She soon made her musical debut on Jamaican reggae fusion singer Shaggy's remix to his single "Boom Boom"...

In the space of 2 years, the singer's life took a complete U-turn.

Her breakthrough hit landed her in some trouble, however...

Waves of  listeners pointed out the resemblance between Cardi's hit and Kodak Black's 2015 tune "No Flockin."

But, in response to the backlash, Cardi insisted she was merely inspired by Kodak Black's song...

The star has since become renowned for her headline-making behavior...

Cardi's crude lyrics and overall overwhelming stage presence certainly haven't stopped her from succeeding; they've done quite the opposite, in fact. Throughout her career, she has bagged herself a Grammy, 7 Billboard Awards, 3 MTV Music Awards and 2 Guinness World Record Awards. Not too shabby.

You have to admire her confidence...

She gave birth to her daughter, Kulture, who she shares with rapper Offset. Recently however, the star experienced some worrying health symptoms...

Cardi B is currently recovering from her trip to the ER.

The star said she had been suffering from extreme stomach pains for days.

The rapper revealed the problem.

She made the decision on Tuesday night to go to the ER, and that's no small decision during this pandemic. She said: "some real bad stomach problems for 4 days."

She posted a picture of her hospital bracelet.

Showing the date of hospitalization as March thirty-first. Cardi said the ER trip had her feeling much better, and that she hoped to be pain-free soon.

But the good news is the star is back to posting funny stuff on social media, so let's hope her social media presence reflects her current state of health.

Although it seems her condition was actually rather critical...

As she revealed on Twitter she had lost a shocking 5lbs in just 4 days. We just hope she's on the mend now!

After the rapper revealed a HUGE new back tattoo online.

It's quite the thirst trap - and reveals the huge tattoo, of what appears to be flowers, across the entirety of her back and butt.

It took months to complete.

The bright and colorful piece goes covers Cardi's entire backside, from the top of her back down to the middle of her thigh. According to TMZ, 'it's festooned with flowers, butterflies and even a hummingbird'.

What says Cardi B more than a gargantuan bright tattoo which takes up so many inches!

$43.19 $34.55
Buy Now
See More Deals
We hope you find these deals as awesome as we do! Just an FYI: we may receive a share of sales from links on this page