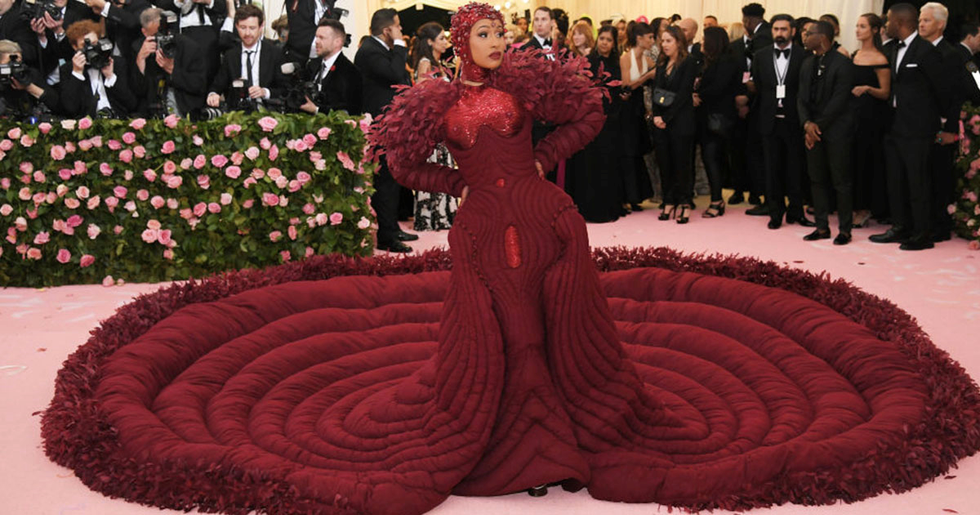 This year's Met Gala was bigger and bolder than ever with the attending celebrities pulling out all the stops to stand out from the crowd.

An annual benefit for the Costume Institute at the Met Museum of Art in New York, this spectacular event is infamous for its star-studded guest list.

And even more for their choice of extravagant outfits. The more flamboyant the better.

With this year's theme being Camp: Notes on Fashion, we were expecting our fave celebs to relish the opportunity to go wild and they did not disappoint.

Cardi B definitely deserves a special mention for stealing the show by wearing a stunning custom-made red gown that featured a train spanning ten feet! Just wait until you see it in all its feathered glory.

And have you seen what Katy Perry wore yet? Let's just say that it reminded us of Beauty and the Beast, but not in the way you might think... We have the picture, and all the rest, right here!

Let's start with the legendary Celine Dion who never fails to wow at this annual event.

Now this lady has some seriously sexy pins, that's for sure. And we simply adore this show-girl inspired outfit complete with a 22-pound feathered headpiece. Go big or go home should be Celine's motto.

Both wearing Saint Laurent by Anthony Vaccarello, it was Miley's green and black geometric sequined dress that really stood out. But she thought that it was Liam who really stole the show saying: "I'm literally freakishly obsessed with husband right now." Cute!

Even though it was her first time at the Gala, Dua Lupa did not let us down.

Wearing a Versace gown and boots, she nailed the theme perfectly. Love, love, love it!

Winnie Harlow wasn't afraid to fash the flesh in this daring number.

If you weren't already aware of Winnie's insanely perfect body, you most definitely will be after seeing her in this bejeweled gold dress with a matching peacock-esque headpiece.

And as one of the co-hosts of the show, he had to make sure he looked as flamboyant and fabulous as possible. Nailed it.

Zendaya managed to look elegant, graceful and fun in this Tommy Hilfiger creation. This fabulous dress even lit up when her stylist, Law Roach, who was dressed as her fairy godmother, waved his magic wand at her. Pure theatrics. We love it!

Oh no, it's JLo. But the resemblance is uncanny. And that is one mighty thigh flash too. You've definitely not mellowed as you've matured, Jenny from the Block.

And, of course, her support for the Pride movement. Only Cara could pull off a headpiece that contained banana peels, a fried egg, and dentures! And the cane topped it all off perfectly.

Actress, Lupita Nyongo, looked carnival-ready in this Versace gown with its very own wings.

Complete with drag-inspired makeup and an amazing 'fro adjourned with five spray-painted Afro picks! We needed sunglasses to just glance at this dazzling number!

Harry Styles, one of the co-hosts, looked sleek and sexy in a sheer black top and high-waisted pants.

We f*cking loved it.

Never one to go under the radar, singer, Billy Porter made a very spectacular entrance.

Before standing proud and flashing his ten-foot golden wings in front of the crowds! We won't forget this outfit in a hurry.

Jared Leto proved that two heads are better than one.

As a tribute to the Gucci models who walked the runway back in 2018 holding replica heads in their hands, Jared wowed in this floor-length Gucci suit.

His make up was sensational but we have to be honest, it freaks us out just a little bit. We just can't look him in the eye... sorry, "eyes".

Of course, the Kardashians were out in full force.

With feathers aplenty, these gals were never going to sneak in unnoticed. Not that they would want to!

Never one to be outshone...

This is actually the dress that Kylie wore to the after party, but it is so damn gorgeous that we just had to show it to you! Obviously inspired by mermaids, Kylie completed her outfit with a long flowing electric green wig and matching boa. Well, if you've got it, flaunt it!

Jordan Roth chose the perfect outfit to reflect his personality.

As a Broadway producer, Roth obviously adores all things theatrical, so when he arrived wearing a dramatic cape, we just knew that there was more to come. And we were right. As he soon dramatically revealed that the cape unfurled into the image of a theater. So camp. So perfect.

And who could fail to notice the show-stopping crown and rainbow trim on her gown that had probably the highest leg split of the whole night. And Nick looked pretty dapper too with his bling shoes!

They were quickly followed by the arrival of Nick's brother, Joe, and his new bride, Sophie Turner.

A couple who admit that they love to coordinate their outfits on a night out, they both looked absolutely sensational in these '80s inspired outfits by Louis Vuitton. Only Sophie could rock a jumpsuit quite so well!

And of course, Lady Gaga had to go one better than everyone else.

By appearing in not one, not two, not even three, but four different outfits. Starting with this gorgeous floaty pink number with a train that seemed to just go on and on. But wait until you see Cardi B's dress...

Gaga then removed this gown to reveal a sophisticated black dress.

A look that she completed with the addition of black opera gloves. So chic, darling!

Then she whipped that gown off to reveal a bright pink satin number.

And she accessorized with massive sunnies and a Tiffany necklace.

And last but not least...

She removed yet more clothing and finally entered the benefit wearing little more than her underwear. And a pair of platform boots of course. Well, if you've got the body...

And Gaga is lucky enough to have the face, too.

She chose to accentuate her beautiful facial structure with possibly the longest and most extravagant false eyelashes we have ever seen! If you look really closely you can see that her upper lash line is adjourned with jewels. So OTT. As if we would expect anything less from Lady G.

But we literally have no idea what Katy was thinking with this unusual creation.

Dressed as a chandelier complete with three layers of light up candles, Katy definitely made sure that she wouldn't fade into the background. We actually love the sparkly silver Moschino dress underneath but the rest... we are not so sure.

Then there was Gwen Stefani resplendent in a bejewelled bodysuit and white fur coat.

With, of course, her trademark red lips and platinum blonde hair! Her train was pretty decadent, too with its silver crystal details but, again, it was nothing compared to Cardi's...

She really did steal the show. And she knew it.

She wore a show-stopping custom Thom Browne dress that took a whopping 2,000 hours to create. Speaking to Vogue, Browne said: "I designed this dress for Cardi specifically because she has the ultimate beauty in a woman's body, and that is what the dress is about for me: taking advantage of that beauty."

The dress itself was made from a combination of tulle and silk organza.

And it was decorated with 30,000 burnt and dyed coque feathers. No wonder it took thirty-five people to make it!

And you couldn't miss the epic circular train that spanned a massive ten feet.

In fact, it was so big that Cardi needed to be accompanied by five men in order to make her way up the iconic Met staircase. An actual entourage for your dress; now that's something!

Many compared the gown to the one that Rihanna wore to the Met Gala back in 2015.

That iconic pizza dress that Rihanna wore sported a very similar circular train to Cardi's gown that cascaded down the staircase in a very similar way. Was Cardi influenced by Rihanna when she chose this style of dress?

Well, according to Cardi, the inspiration behind the gown was feminism.

Go, Cardi! Taking one for the girls. At the event, she said: "I was trying to make sure it was elegant, extravagant but not too Halloween-ish . . . perfect dress for me." We definitely think that she succeeded. And we absolutely adore the stoned skull cap and dramatic makeup. One word: fierce. Don't you agree?