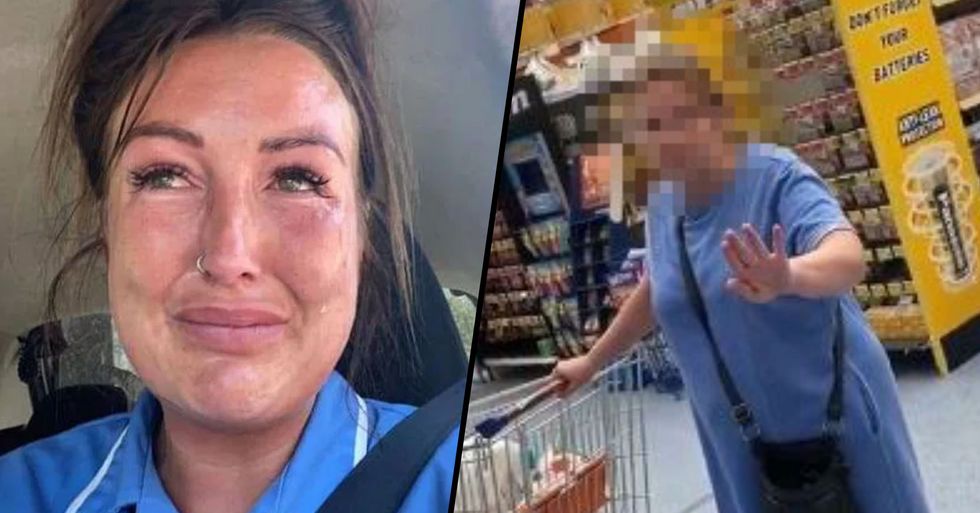 One care worker has shared her encounter with a brutal shopper, who clearly had no regard for the essential work she was doing.

Keep scrolling for the disgusting video...

Care workers haven't had it easy since the outbreak started.

In fact, sometimes they get completely overlooked.

Due to them not being on the "front lines."

But that doesn't mean they aren't risking their lives every day to look after those more vulnerable.

And with the added risk of less PPE.

They really are the heroes we need.

But that doesn't stop people from spreading hate for the essential workers...

Yep, crazily, there are some people accusing care workers of "spreading germs" when they're out shopping for essentials.

Recently there has been a rise in this abusive behavior.

For some reason, people feel that spitting and shouting at carers is perfectly acceptable...

One carer has been left in tears after a woman shouted abuse after spotting her in uniform.

Kimberley Simpson from the UK has shared a video of the whole ordeal...

And the video has left the internet outraged...

It shows the woman following her through the store, "shouting" that she wasn't allowed non-essential items.

Understandably Kimberley was "disgusted" by the other woman's behavior - who threatened to report her to the manager.

Kimberley shared the video of the argument to Facebook.

She had been shocked by the woman suddenly confronting her as she shopped.

Kimberley could be heard from behind the camera saying: "You're having a go at me for buying stuff."

"You just said that I am buying stuff that is non-essential. You're absolutely ridiculous, you should not have come up to me aggressively like that saying I'm spreading germs when I'm not spreading germs."

The woman can then be heard saying: "I'm not having a go."

"You're still spreading germs." She then claims she is not referring to the pandemic, but germs in general. As if she's not?

The woman had followed Kimberley around the shop for 10 minutes.

Kimberley plucked up the courage to share her thoughts on the confrontation, saying: "I'm not doing anything wrong."

"I know I’m an ugly crier, but this lady has just followed me around B&M shouting at me saying I’m not allowed in the shop because I’m in uniform."

She went on to talk about the woman's actions...

She said she had spoken to her manager.

After the woman threatened to bring it up with the care home she worked for.

Kimberley added: "I've just spoken to my manager and they said I’m not doing anything wrong."

"We have worked so hard, no clients have the virus so we are clearly doing something right."

Since she shared the post, Kimberley has been inundated with support after sharing the video online.

She said: "Feel overwhelmed by all the kind messages, all I've done is cry this afternoon."

Sadly this is happening all too often...

Care workers have been targeted during the pandemic.

Clearly the woman had no regard for the essential work Kimberley does.

This behavior is one thing we don't need during a time like this.

Sadly, more and more people are being subjected to this hateful behavior. Keep scrolling for the shocking altercation that resulted in a security guard getting shot...
20%

$22.99 $18.39
Buy Now
See More Deals
We hope you find these deals as awesome as we do! Just an FYI: we may receive a share of sales from links on this page