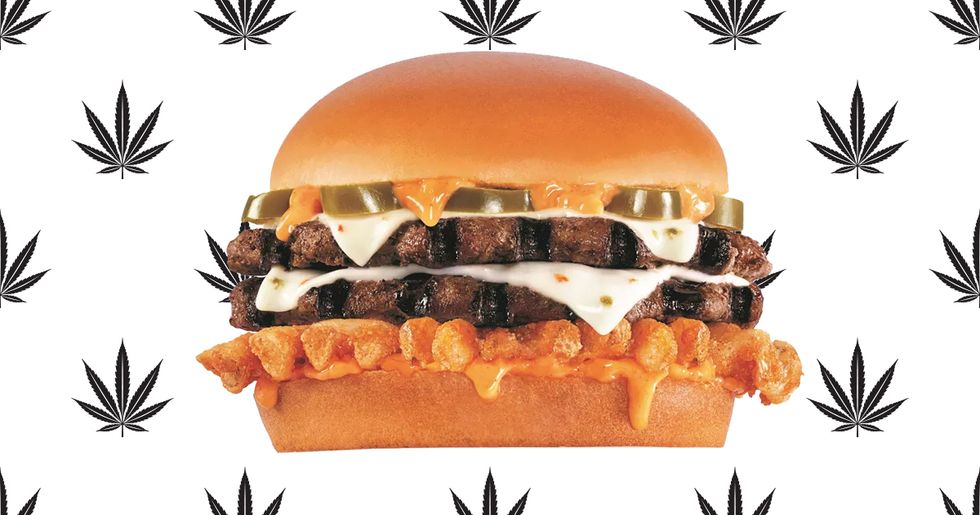 Anyone here looking forward to 4/20? This year's April 20th is going to come with something special for those in the Denver area. And while you won't be able to "blaze it," this strange new burger is still gonna be served hot!

Fast food chain Carl's Jr. announced its plans to sell the very first cannabis-infused burger. If you're wondering exactly what that involves, keep reading. If nothing else, the fast food chain's plan is pretty intriguing! But the burger is very limited and still in the testing stages — blink and you'll miss it.

Here are all the details, including when and where you can try out the unique creation. Because, in a weird way, Carl's Jr. is boldly going where no fast food chain has gone before!

Cannabis has been slowly legalizing across the U.S.

And that began with Colorado and Washington in 2012, the first two states to legalize recreational marijuana.

Because if you live in the Denver, Colorado area, you can make plans to visit one particular Carl's Jr. locale over the weekend.

The date is celebrated as a kind of unofficial holiday for fans of cannabis and its legalization.

On April 20th only, a single location in Denver will be selling its CBD-infused "Rocky Mountain High: CheeseBurger Delight."

Guess how much it'll cost you?

Yup, you can pick up a Rocky Mountain High burger for $4.20.

Here's what the burger is made of:

This meal is actually a few months in the making.

According to Patty Trevino, Carl's Jr.'s senior vice president of brand marketing, the company has been working on a cannabis-infused burger ever since the launch of their vegan burgers.

That was back in January.

More and more people have been shifting towards a vegetarian or vegan lifestyle, so a number of food chains have been slowly evolving.

So Carl's Jr got another idea.

And Trevino's first conversations about the CBD-infused burger were actually with Carl's Jr.'s legal team.

That's not how a new burger usually starts.

But of course, only a select few states have fully legalized recreational cannabis, so it's a little bit more of a touchy subject.

Nevertheless, they gave it a shot.

"I was sitting down with our head chef Owen Klein, and we were talking about trends," Trevino said. "We looked at ourselves and said, you know what, let's try."

So they settled on Colorado for the test run.

And according to Trevino, it is more than a one-day stunt for 4/20.

Carl's Jr. will be watching to see what happens.

Specifically, they'll be monitoring sales and customer and franchisee responses. If the day goes well, this won't be the last we see of the CBD-infused burger.

They could expand the test.

And, of course, this could lead to Carl's Jr. one day rolling out the burger on the official menu across the U.S.

Marijuana may not be fully legalized across the U.S. yet, but that's not stopping us from infusing food with it where we can!

And the chain seems genuinely interested in the possibility.

"If anyone is going to do it, I would want Carl's Jr. to do it," Trevino said of a possible nationwide launch of its CBD-infused burger.

If you're in the Denver area and you want to make sure it does, you know what to do!

It won't be easy though.

Handling each state's laws regarding cannabis will be tricky, to say the least.

Carl's Jr. does have an advantage.

It's a West Coast chain, which means it operates in a lot of states that have legalized marijuana (the whole west coast from California up).

But it's pretty wide-spread, all in all.

Carl's Jr. and its sister chain Hardee's (which is located mostly in the South and Midwest) have over 3,800 locations in 44 states--plus internationally.

And just to be clear, you won't get high from the burger.

It's infused with CBD, which is the nonpsychoactive part of marijuana. So you'll get the flavor, but not the high.

CBD is also getting more recognition.

It's a naturally occurring oil in cannabis, and it's been noted for potential health benefits. CBD is considered a safe, nonaddictive substance.

Scientists have also been testing out its therapeutic properties.

For example, it has proven neuroprotective effects. Plus, its possible anti-cancer effects are currently being tested around the U.S.

CBD is a definite trend.

And Carl's Jr. is trying to stay on top of the trend with this burger. "It is something that feels right for the brand," Trevino told CNN Business. "We are all about innovation."

The chain is just hoping to find its next major crowd-pleaser. Carl's Jr. customers appear to be fans of innovation.

They're also hoping to court a younger crowd.

Trevino added that they're looking for "future Carl's Jr. customers that are younger," as those customers "are more open to different flavors of products."

The fact remains that the Food & Drug Administration hasn't even decided how to regulate CBD products yet, so it could be several years before the nationwide sale of CBD-burgers.

Both Walgreens and CVS have signed deals so that they can sell CBD topicals!

The possibility of CBD-infused products is still fresh.

"If you were to ask me when I was at Burger King back in the mid-2000s, I would have been like, no way," she said. "But today, this is a huge trend with consumers."

So here's the big address:

You can grab a "Rocky Mountain High: CheeseBurger Delight" at 4050 Colorado Blvd. in Denver, starting at 6 a.m. on Saturday, April 20th! Share the news with your friends!