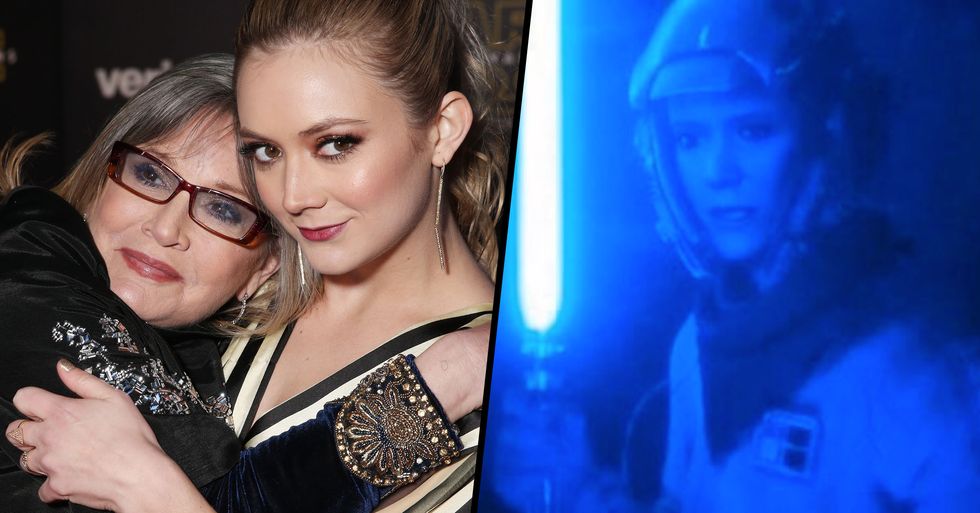 When Star Wars: Rise of Skywalker hit screens last month, it was the must-see film of the year for Star Wars fans. Capping off the decades-long, iconic franchise, it was a huge deal but questions had been raised over one particular character.

Ever since Carrie Fisher's untimely death in 2016, producers were left with a huge dilemma when it came to Rise of Skywalker, because, what would the final movie be without Princess Leia?

So, the team had to wrack their brains for a solution to their problem, and it seems they struck gold, with people hailing it as "poignant" and "emotional."

Keep scrolling to see what the scene looked like. This is truly heartwarming...

Fans were thrilled by the news of another movie hitting screens.

Sadly, the news is bittersweet...

After over 4 decades, Star Wars: The Rise of Skywalker will cap off the lengthy saga - meaning the beloved franchise has officially come to an end.

The long-awaited movie sees the Resistance face the First Order once again, and the end of the ancient conflict between the Jedi and the Sith.

For Star Wars fanatics, it was the must-see movie of the entire year.

Well, of course, many fans were truly blown away by the flick, believing the well-loved saga got the spectacular conclusion it deserved. The movie has even received a respectable 7.0 score on IMDb.

But there's one element that proved tricky for producers.

Following the acting legend, Carrie Fisher's, untimely death in 2016, the team had to find a way to incorporate her into this movie.

But knowing there was no way the final movie could be without the beloved Princess Leia, the team were left stuck when it came to Rise of Skywalker.

The team had stated they had no plans to digitally re-create Carrie's performance or replace her altogether.

Director J.J. Abrams had reassured fans that Carrie would be "very much alive with us" in the movie.

For some of the scenes featuring Carrie, the team were able to use eight minutes of leftover footage from Star Wars: The Force Awakens .

But when it came to one important moment, in particular, they had to come up with another idea.

The on-screen moment in question? A key flashback scene.

The brief flashback scene shows Leia and Luke training and using their lightsabers. Keep scrolling to see what the scene ended up looking like.

And it was no other than Carrie Fisher's daughter, Billie Lourd, who made the scene possible.

According to EW, Billie stepped in for her mom and played her in the flashback. The visual effects team then replaced Lourd’s face with archival footage of Fisher, taken from the original trilogy.

Speaking to Yahoo Entertainment about the scene, Tubach explained: "Billie was playing her mother. It was a poignant thing, and something that nobody took lightly — that she was willing to stand in for her mom." "It felt great for us, too. If you’re going to have someone play [Fisher’s] part, it’s great that it’s [Billie] because there are a lot of similarities between them that we were able to draw from."

As for young Luke, the team used de-aging CGI.

And it looks so realistic!

Here's a snapshot of the scene showing young Leia.

We're not crying, you're crying. Its been executed so well. It's amazing how Billie stepped into her mom's shoes for this. Rise of Skywalker is in theaters now. In the meantime, keep scrolling to find out which Star Wars legend has come out as gender fluid.