Carrie Underwood's Baby Son Cries When His Dad Sings, but Immediately Stops When She Sings | 22 Words 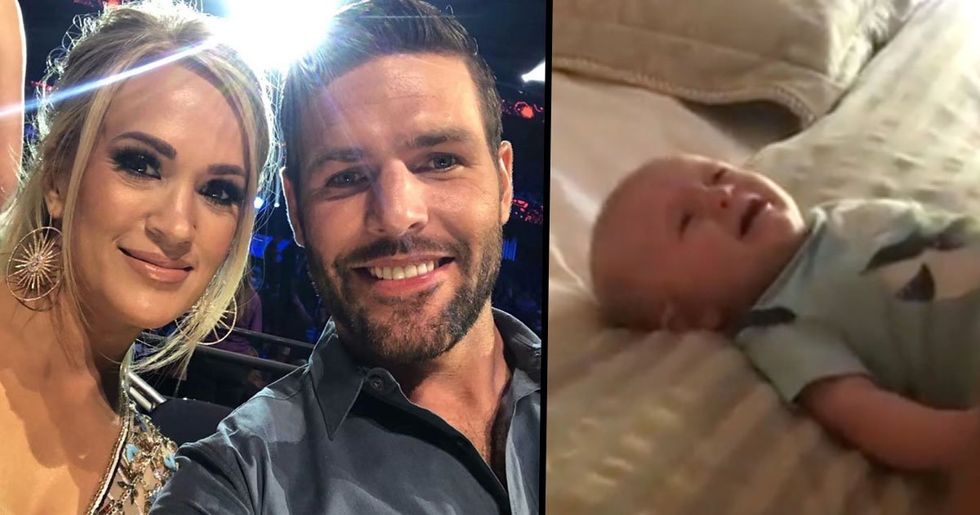 Carrie Underwood's Baby Son Cries When His Dad Sings, but Immediately Stops When She Sings

There's a new reality-television singing competition coming at ya.

The lead judge is none other than five-month-old Jacob Fisher, the son of country-singer, Carrie Underwood, and former NHL star, Mike Fisher (watch the video that proves his skill below!).

After Underwood shared her son's knack for determining the talented from the tone-deaf, everyone is wondering, "how long until this kid gets his own show - and what other babies will join him?"

You always need a judge that's good at picking the right songs for the contestants.

I think that three-month-old Emma, from Chelsea, London, could be just what this imaginary singing competition needs.

"Somewhere Over The Rainbow" is an overrated number Emma, good shout.

As her father plays a medley of the Judy Garland 1939 classic, "Somewhere Over The Rainbow," alongside the 1965 Motown favorite by The Temptations, My Girl,  young Emma makes it blatantly clear which song is a good choice and which one is bad.

There's no clearer indicator of what's bad than the wail of a newborn baby.

Having only been on this Earth for a short period of time, these babies are sure as heck not influenced by the opinions of anyone else; their wail is final.

Not all tears indicate a bad performance.

Every singing reality show needs a judge that can turn on the waterworks during an emotional song. Ideally, all of the judges on the panel can have the ability to drag out a few tears throughout the series. Tears for the emotionally-moving performances can stir the viewing audience into feeling moved and are also handy for the inevitable sob-story contestant bits.

Ten-month-old Marie-Lynne is just what the judging panel needs.

In the video, we can see how Marie-Lynne Leroux becomes increasingly moved by her mom's emotional rendition of Rod Stewart's 1988 tearjerker, "My Heart Can’t Tell You No." This baby's got what we're looking for.

Every singing-competition panel needs a judge with an eye for fashion.

If you want to do well in a reality television singing competition, you need more than the right voice; you've got to look the part, too. And who better to help you on the road to success than a judge that knows a thing or two about what looks hot and what does not?

North West is a toddler that isn't afraid to make her opinions heard on the catwalk.

Not only has North West, the first child of Kanye West and Kim K, already been to more fashion show than any other kid on the planet, this little girl also isn't afraid to pipe up when necessary.

If your collection doesn't engage North West, don't expect her to hang about.

As this compilation of North West at Paris Fashion Week proves, this little lady is more than happy to let fashion designers know when a collection does not spark her interest. If North West gets bored, don't expect her to stay seated, and if your collection is really bad, she will happily let you know with a good ol' cry.

Reality show panelists have to say it how it is. The blunter the better.

North West gets my vote for the judge that will tell you if you're dressed as if you've just walked out of the changing rooms in K-Mart.

How about a judge that appreciates the alternative contestants?

If all of the judges liked the same angelic pop-princess voices what fun would the singing competition be? We need a judge that can appreciate the underdog, the grizzly haired guy that sings opera, the ex-druggie wannabe rockstar, the screamo artist that makes it past judges houses to everyone else's surprise. You know the type?

This baby from Malta has just what the competition needs.

This unnamed baby boy from Malta evidently has an ear for the deep-voiced performer. We can see how the baby is soothed into a state of happiness as his father belts out his deep, deep voice. I think that this kid has got the potential to lead the alternative singers in the competition straight into the final - or, I mean, let's be realistic - the semi-finals.

If we have a judging panel of babies, can we have dogs as contestants?

Obviously, not just any old dog would be able to enter... only the singing ones.

As this compilation shows, a lot of dogs have the The Baby Factor.

Maybe, as we grow up, we lose the ability to appreciate the true beauty of a canine's vocal ability. The babies clearly have no trouble appreciating the wonder of the singing ability of these pups, making me question whether there's space for a dog category in this competition.

I'm pretty sure that I remember a member of Sharon Osbourne's extended family auditioning for the X-Factor one year. Now that we're getting into the nitty-gritty of the show we need to think about story arcs, narratives. Reality television doesn't just happen, does it? We need to throw in a few golden eggs, right?

I propose getting this sister-duo onto the show.

Baby Gabby is definite judge panelist material and older sister, Zoe, would make a worthy contestant. Picture the scene: slow, sad music starts to play, we learn that judge Gabby hasn't seen her sister in a long time (I'm thinking, let this be a Families Reunited meets singing competition crossover...) and who walks on stage? Only her freakin' sister! After her sweet performance of "You Are My Sunshine" with constant camera switching between the stage and an emotional baby Gabby, there won't be a dry eye in the building.

A good judge will get lost in the music.

Anyone that watches reality singing competitions will know that the sign of a good performance is when it takes the audience and the judges out of the space, to somewhere else entirely. A judge that can be truly moved by a song is definitely worth having on the panel.

Baby Evan gets completely lost in his mother's rendition of "Time To Say Goodbye."

As his mom hums the operatic pop number, originally performed by Andree Bocelli in 1995, baby Evan is moved to quiet tears, about a minute in, he can't contain the emotion anymore and breaks into a sob. I don't blame him, that song is a bit of a weepy.

And who would be better than the singing expert of the minute, Jacob Fisher. This five-month year old can not only turn on the waterworks when an auditionee can't sing, but he can also sit in quiet contemplation when a good singer hits the stage.

As you can see, Jacob's father is not about to top the Billboard charts anytime soon - a fact that baby Jacob is not afraid to let his father know. After his American Idol winning mom, Carrie Underwood, takes over the song, Jacob eases up. This baby is no fool, he knows a contestant with potential when he hears one.

Who knows when The Baby Factor will get picked up?

But when it does, don't forget, you heard about it here first.