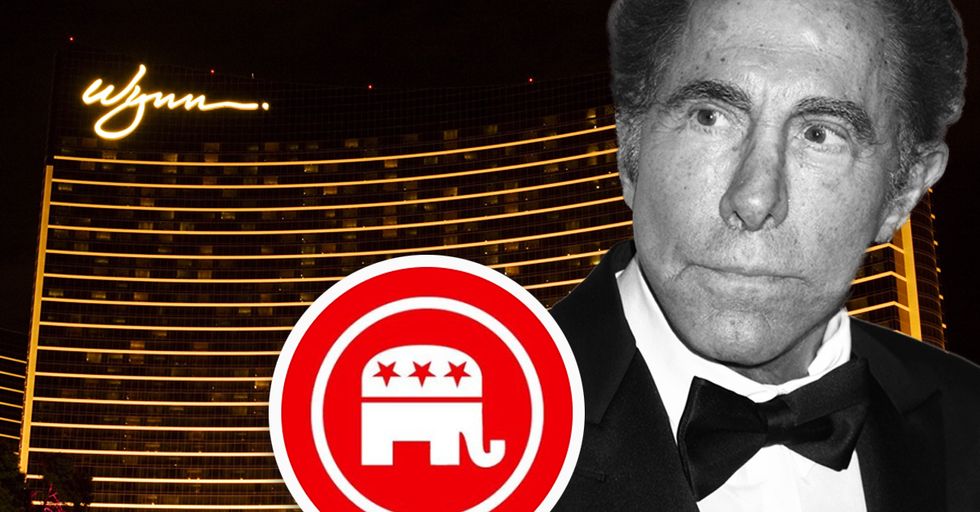 Casino mogul Steve Wynn has been having a very difficult couple of days. On Friday, the Wall Street Journal published dozens of allegations of sexual misconduct against the renowned Las Vegas billionaire, many of them spanning decades. According to the Journal, Wynn had a pattern of sexually harassing or abusing the women who worked under him.

The details are eyebrow-raising.

Wynn was known to routinely walk around his apartment in very short shorts with no underwear, and to position himself in such a way that his genitals were visible whenever he was being given a pedicure.

To one employee, he asked, "So when are you going to come into my office and f--k me?" This was in addition to routinely deploying his assistant to find the phone numbers of the cocktail waitresses that worked in his casinos. Marital status was apparently not a deterrent to Wynn either.

The mogul was known to repeatedly proposition his subordinates, including his wife's married assistant, who he would call to ask, "What are you wearing?" and "Why don’t you hang out with me?"
The Journal's reporters even uncovered a $7.5 million payment to a manicurist who accused Wynn of forcing himself upon her in 2005.

"Everybody was petrified," Jorgen Nielsen, a former artistic director at the salon, said. Women would even schedule fake appointments to keep from dealing with the mogul.

"The idea that I ever assaulted any woman is preposterous," Wynn said in a statement to the Journal. "We find ourselves in a world where people can make allegations, regardless of the truth, and a person is left with the choice of weathering insulting publicity or engaging in multi-year lawsuits. It is deplorable for anyone to find themselves in this situation."
Wynn blamed his ex-wife, Elaine Wynn for the allegations. "The instigation of these accusations is the continued work of my ex-wife Elaine Wynn, with whom I am involved in a terrible and nasty lawsuit in which she is seeking a revised divorce settlement," Wynn stated to the Journal.

Republicans are distancing themselves from gambling mogul Steve Wynn after a report of sexual misconduct. Ahead on… https://t.co/qsWShNsQB7
— CBS News (@CBS News)1517227114.0

The pair have been engaged in a bitter lawsuit over her attempts to lift restrictions on the sale of her stock in Wynn Resorts, which Wynn is the chair and CEO of.
However, this is not the first time there have been allegations against the mogul responsible for such Las Vegas staples as the Mirage, the Bellagio, the Wynn, and several other casinos.

During the 1990s, Dennis Gomes, a former executive at the Golden Nugget, which Wynn then operated, referenced the mogul's objectionable behavior in a deposition, saying he "routinely received complaints from various department heads regarding Wynn’s chronic sexual harassment of female employees." Before he died in 2012, his widow Barbara once heard him say "I'm not his pimp," in reference to Wynn.
Now, Wynn is experiencing fallout from the scandal. Wynn Resorts stock plunged over the weekend, causing the billionaire to lose $424 million of his Forbes estimated $3.5 billion dollar net worth.
The billionaire also stepped down from his position as the Republican National Committee chair. "Today I accepted Steve Wynn’s resignation as Republican National Committee finance chair," RNC Chair Ronna Romney McDaniel told Politico.

This move comes in the wake of the Weinstein scandal, which saw noted Hollywood producer and Democratic fundraiser Harvey Weinstein accused of sexual assault by numerous actresses. In the aftermath, the Republican Party castigated the Democrats for their complicity.
"During three-decades worth of sexual harassment allegations, Harvey Weinstein lined the pockets of Democrats to the tune of three-quarters of a million dollars," RNC Chair Ronna Romney McDaniel said in a statement. “If Democrats and the DNC truly stand up for women like they say they do, then returning this dirty money should be a no-brainer."

Now, the tables have turned, with Democrats directing McDaniel's exact words back at her, as well as a few others. "The RNC and Ronna McDaniel have helped fund the campaign of an alleged child molester, blindly supported the GOP’s attacks on women’s health, supported a President who has been accused of sexual misconduct by over a dozen women," Sabrina Singh, the DNC’s deputy communications director, said in a statement, "and now they remain silent amid sexual assault allegations involving Steve Wynn, one of their party’s most senior officials."