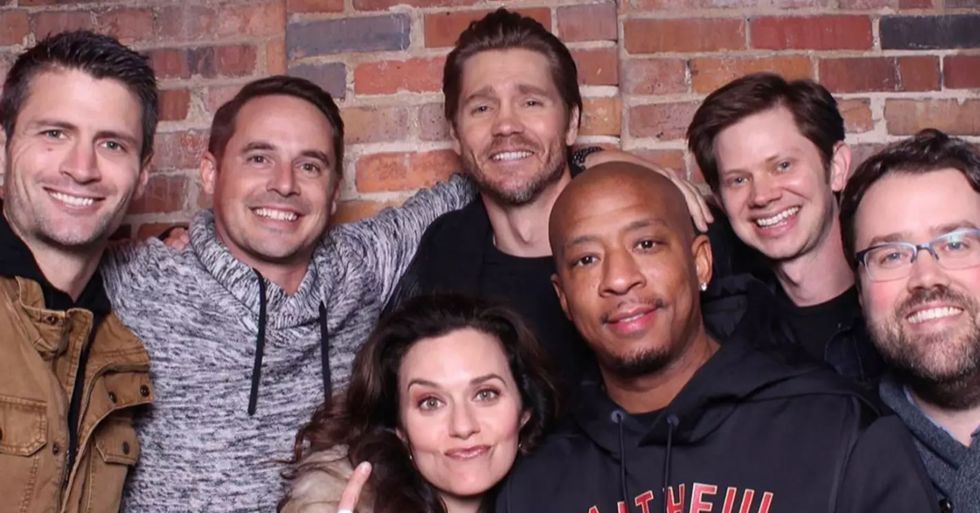 It's the moment we've been waiting for for the last 8 years - The cast of One Tree Hill have finally reunited, and die-hard fans of the long lost show couldn't be more excited.

Keep scrolling for the full story, and to see the incredible photos for yourself.

It's been 8 long years since the end of One Tree Hill.

Originally airing in 2003, the hit sitcom graced our TV screens for 9 whole years, before it's finale in 2012.

The show followed the adventures and mishaps of a group of high school students...

Who all lived in the small and secluded North Carolina town, Tree Hill.

And, in typical small-town fashion...

Half brothers, Nathan and Lucas Scott were the star players of the Ravens...

Whose shared passion for the sport united the otherwise different personalities.

Nathan and Lucas were worlds apart from each other.

While Nathan was the confident, arrogant, and spoilt sports star of the school, Lucas, who came from more humble beginnings, was a little more introverted.

The brothers didn't get off to the best start...

And they initially started out as enemies as they constantly battled it out against each other for positions on the basketball team.

But, through many difficult times and relationship struggles...

They eventually found the best in one another and wound up forming a close bond.

There were plenty of other dramas involving the brothers' friends and many girlfriends along the way.

Because it wouldn't be a great sitcom without all the drama, would it?

There were constant scandals and scenarios developing in the fast-paced plotlines of One Tree Hill, which was one of the many things we loved about the show.

So you can imagine everyone's dismay when the plug was pulled on the show back in 2012.

By its ninth season, the show had simply run its course and the creator, Mark Schwann, decided to call it a day.

Ratings had been slowly declining throughout the last years of the show...

Which is inevitably going to happen when the teenage, high school characters are no longer the teenagers we once knew and loved.

As the characters got older...

Both the cast and the plots were beginning to change at a more rapid rate, making it difficult for many viewers to keep up.

But, regardless of the dwindling numbers towards the end of the show...

It is undeniable that One Tree Hill is a timeless classic, and we'd love nothing more than to see the cast, reunited together on our screens once again.

Well, that reunion may have just happened.

Hilarie Burton, who played the role of artist and cheerleader, Peyton Sawyer, during her time on the show, made all our wishes come true this weekend...

Okay, so it wasn't an actual on-screen reunion...

But it was still a reunion all the same.

This weekend, the original cast all reunited for a fundraising event...

Writing: "I got a job when I was 20 years old that gave me some of the most important relationships and experiences of my life. I didn’t take nearly enough pictures this weekend and didn’t get photo evidence of everyone, but I love @raenia23 at @fwbcharityevents for bringing us all together."

The selfies are everything.

"Thick and thin, our shared history has been a cornerstone in my life. Love you guys."

The reunion involved all the cast members from the pilot episode of the series.

Captioning her final post, Hilarie wrote: "We had so many brilliant castmates over the years. But this bunch of crazies are the original cast from the very first pilot episode. Most of us got a script called 'Ravens'. We were little kids with a whole lotta hope. Nathan. Tim. Lucas. Peyton. Skills. Mouth. Jimmy. The OGs of Tree Hill High."

But, until it does, you'll find me holed up in my bedroom rewatching the entire series... You should definitely do the same.