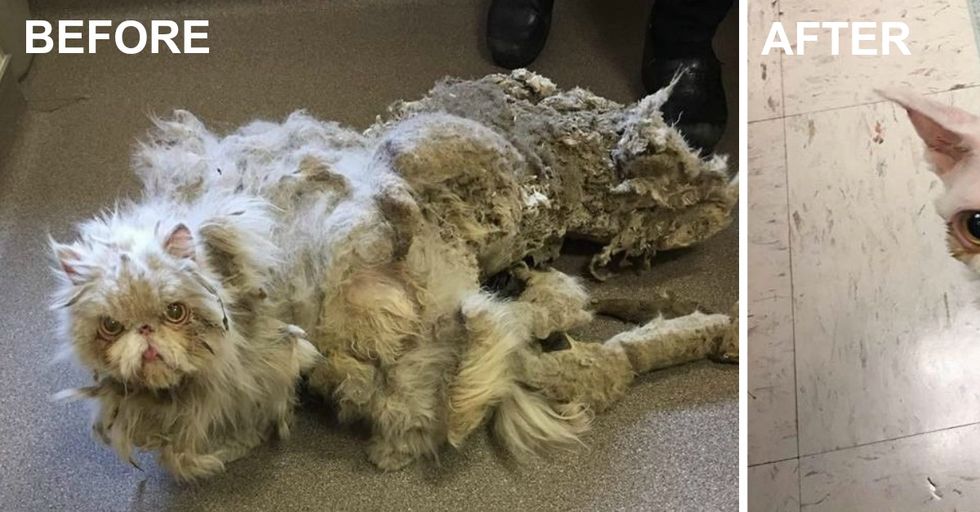 Cat Covered In Matted Fur Looks UNRECOGNIZABLE After Being Rescued

If you think you're having a bad hair day, you should meet Sinbad the cat.

Staff at Chicago's Anti-Cruelty Society couldn't believe their eyes when the little guy came in pulling five pounds of matted fur behind him "like a carpet." He'd belonged to an old man who was no longer able to care for himself, much less an animal. But despite his situation, the cat was still incredibly friendly.

"Sinbad came in to our shelter after a utility worker saw him in the home of an elderly gentleman," said Elliott Serrano. "The man wasn't able to care for himself very well, and that was evident in Sinbad's condition."

After the owner gave Sinbad to the shelter, the staff shaved him down and found a tiny, cute cat hidden under all of that fur.

"He was so tolerant and sweet during the grooming which was grueling. It took hours," Elliot said.

They estimate that Sinbad is about nine, and he weighs less than seven pounds, meaning that the shaving cut his weight almost in half.

After being rescued from his "carpet," the poor cat just wanted to snuggle.

"We had to force feed him for a bit to make sure his digestive system would keep working and not hurt his kidneys," the staff said.

Within a few days, this little fighter bounced back.

Elliot took Sinbad home just for the weekend, but on the second day at his foster home, Sinbad had a different idea.

He sat on Elliot's chest, purring contentedly, the happiest he'd been in years.

Elliot knew that after that, he couldn't part with his sweet Sinbad.

"Now he's getting lots of TLC and attention," he said. "His diet is being monitored and the goal is to help Sinbad gain weight and grow back his glorious coat!"

At this point Sinbad has made a full recovery, and considering his age and what he's experienced, he's impressively spunky and friendly.

And even with his bad experiences, he continues to be loving and trusting.

"I'm just astounded at how he just loves people, even though people haven't always treated him very well," Elliot said.

"It's a lesson we could all learn."