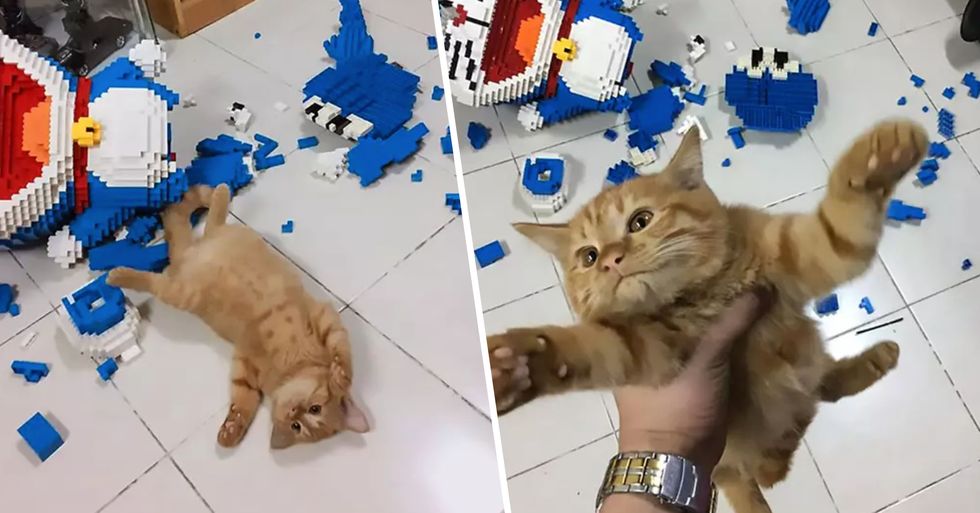 It's safe to say that cats are easily one of the most popular and loveable pets out there.

They are just so cute and it's often hard to stay angry with them... unless they've just destroyed a 2,432 piece model that you spent a week building.

Keep scrolling to learn more about this horrifying but hilarious story...

Well, if you don't, there's probably something slightly wrong with you.

But with every pet...

Comes the risk of something being destroyed.

Cats are known for being entertained by the smallest of things.

Whether that's the toilet roll hung up in the bathroom, or a piece of tinsel that's fallen from the Christmas tree, cats are highly entertained by inanimate objects.

Young cats have a lot of energy, and they're bound to take it out on something...

So it's best to keep delicate objects that have had a lot of time put into them well away from a mischievous kitten.

One man recently learned this...

An unnamed toystore worker from Thailand spent an entire week building a Doraemon cat figure out of toy blocks for a client. Doraemon is a Japanese manga series written and illustrated by Fujiko Fujio, the pen name of the duo Hiroshi Fujimoto and Motoo Abiko.

The finishing product was very impressive...

And the man had used 2,432 blocks to assemble the cartoon cat.

The client paying for the model wanted it ahead of the new year...

But little where they, and the toymaker, to know that disaster was about to strike.

The toymaker is the owner of an adorable kitten...

And this adorable kitten broke into the room where the completed masterpiece stood and decided to make some little amends.

It's lucky that the man had taken a photograph of his finished work as a proof of evidence, but there wasn't much left of his hard work.

He posted the photographs to social media...

In one of his captions, he wrote, "I will kill you!" but it's safe to say that the kitten is looking pretty pleased with itself.

Luckily, the man was very forgiving...

And he wrote about how he and his beloved pet is "good again."

It's difficult to be angry with something so cute...

Replying to his picture, someone said, "Lol. Hope your customer will understand!"

This certainly doesn't change our opinion on cats...

But if you're still convinced that cats are a thing of evil, keep scrolling to learn about the man whose cat would sleep on his face in the middle of the night...