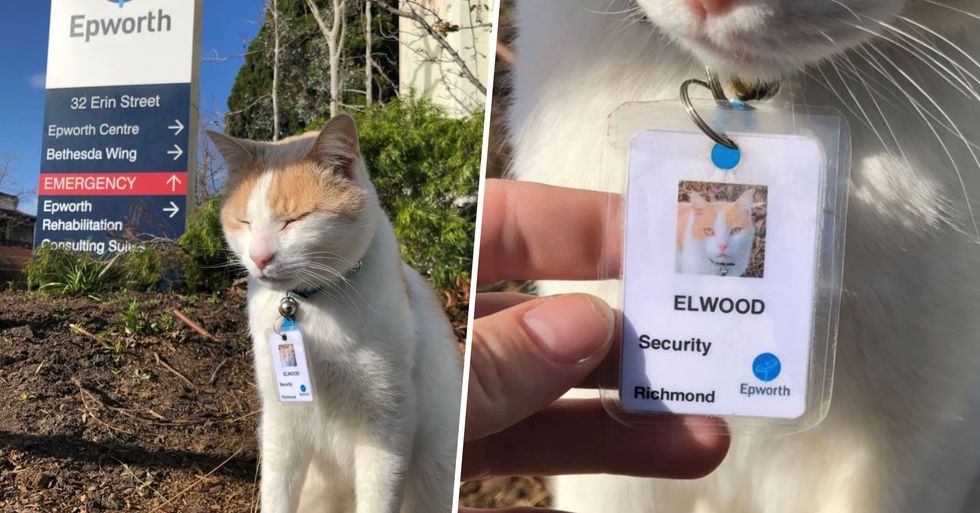 A cat who was hanging around a hospital for a year ended up getting hired as the official security cat of the hospital grounds.

Keep on reading to check out this adorable little security guard...

And studies have proven that owning a cat is certain to lower stress and blood pressure. Maybe that is something to do with how clean they are?

Cats living on the streets rely strongly on their intelligence to survive alone, making them very intuitive around us humans.

But they also rely on people to get by...

And stray cats more than often settle in one particular area where there is a steady food supply and consistent shelter.

Many stray cats and other animals become a solid part of the community...

And this brings us to today's story about Elwood the hospital security cat.

He is a red tabby cat who is now very popular with the patients and staff at the Epworth Hospital in Richmond, Melbourne, Australia.

Chantel Trollip, who works as a pathologist at the hospital, explained how Elwood became so popular.

Speaking to Bored Panda, she explained how the stray tabby cat has been hanging around the hospital grounds for around a year now.

Elwood runs a pretty tight shift at the Epworth Hospital...

He pretty much spends his days either "securing" the front, checking if everyone has some pets and attention to give, or catching some sun in the nearby bushes.

He's now a famous face in the area.

"He is lovely and friendly, but not overly affectionate. He enjoys a good pat, but likes to keep things short and move around a fair bit," Chantel said about the tabby.

But nobody was really sure about where Elwood came from...

He already had a tag when he first started hanging around the hospital grounds and people assumed he was a stray due to the time he spent on the grounds.

But it turns out that Elwood isn't actually a stray!

It turns out that he lives across the road with his real family and a twin brother named Jake. Elwood just comes to the hospital during his days to get those shifts in!

Elwood seems to be happy just doing security work on the grounds...

"He’s never really tried to get into the hospital, I think he’s too small to activate the automatic doors anyway," Chantel elaborated. "There is a kidney dish from the hospital that someone has turned into a water bowl for him."

But one day, when Chantel arrived for work, she noticed a new ID badge on Ellwood's collar.

"I first noticed his ID badge on him in June. I was actually having a case of the sads that day, but seeing his ID badge turned my whole mood around!"

It seemed that Ellwood had been promoted to an official security guard by the hospital officials!

"It is identical to our actual staff badges down to the call codes on the back," Chantel explained, meaning this is a pretty big deal for the dedicated tabby.

This is a huge amount of responsibility for Elwood...

And we're sure that he puts 110 percent into his job every day!

Chantel is here to confirm this...

"I think any potential criminals are thwarted by his sweetness when passersby see him!" she explained. "He has a very sweet chirp of a meow and I think anyone with any ill will would automatically change their plans upon hearing it and so I assume this is his way of getting the job done."

Elwood has become a viral sensation over the last few weeks and people are loving the tabby cat's contributions to life at the hospital.

Elwood clearly has a lot of potential...

And many have pointed out that he should switch jobs and become a therapy cat for the patients instead! It's all Elwood's call, though.

Congratulations on the promotion, Elwood!

For more heartwarming cat stories, keep on scrolling to read about the cat who plays his own tiny piano to let his owners know that he's hungry...