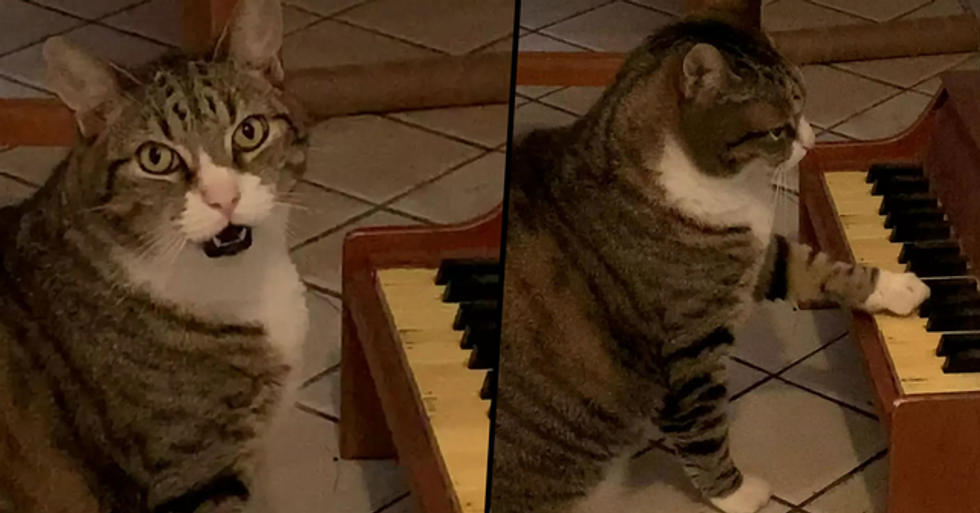 A talented tabby cat has gained viral attention this week after a video of him using his own tiny piano was posted online...

Now, Winslow here isn't your typical tabby cat because, behind that adorably grumpy face, there is actually a budding pianist.

His owner, Kate Nyx, from Philadelphia, owned a miniature piano in high school and, when Winslow started showing an interest in it, she encouraged him to use it whenever he needed something. She said: "He started showing interest in the piano when he was a baby, playing the notes and looking underneath trying to find where they were coming from. It became some kind of hunting reward because he can't do much in the apartment."

"He used to run around screaming all the time and I was like, 'this is no good'. The piano is another way to communicate, so he's not screaming bloody murder."

Remarkably, Winslow has learned to press the keys of the piano whenever he wants feeding, letting out, or just some general attention.

Kate explained: "He tends to only play it when we're in the kitchen and he knows he can possibly get a snack."

The piano has become somewhat of an "alarm" for Winslow.

"He uses the piano to express himself in general, for attention, to get his litter scooped. It's his alarm system in general. He learned that I encourage moving his paws up and down the keyboard, so he does that when he really wants something."

So, when Kate decided to post a video of Winslow in action...

The talented feline was catapulted to viral stardom.

In the video, Winslow can be seen pawing at the piano...

Obviously on the hunt for something to eat.

However, Kate can be heard telling him sternly that it is not yet dinner time...

Making him meow forlornly out of disappointment.

Winslow looks genuinely depressed by the news that dinner time is a whole 2 hours away...

And he sits miserably by his piano, his head bowed out of sadness.

It really is the most insanely brilliant video.

For your viewing pleasure only, I give you Winslow commanding food via tiny piano.

And, ever since the video was posted...

Everyone suddenly wants to buy their own cat a piano.

Kate, you must be one proud cat mom.

For more wholesome animal content, keep scrolling to read about the huskies who befriended an abandoned kitten...