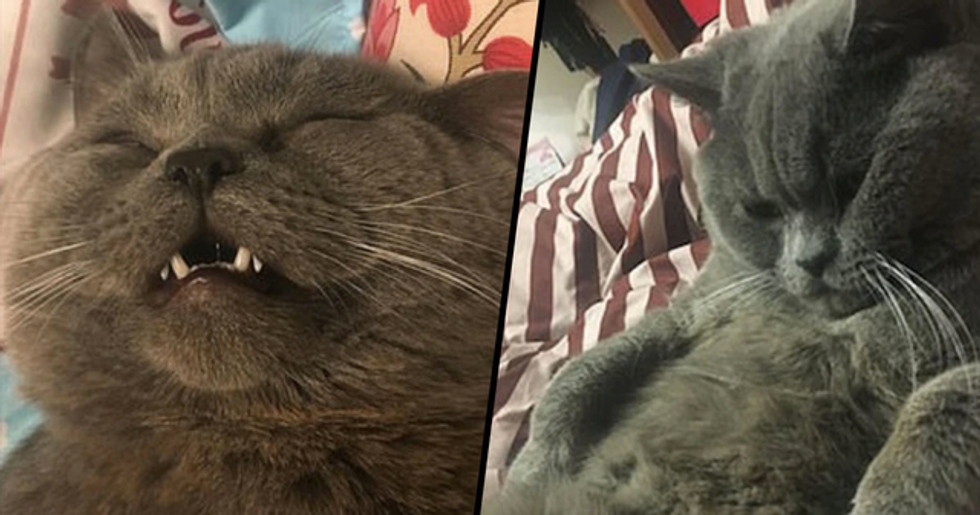 One Chinese pet owner got a nasty shock after dropping his cat off at a pet hotel for the weekend. Xiaopi, an unneutered Russian Blue, took full advantage of his social situation - and enjoyed at least five summer romances over the course of a single night.

Post-coitus, Xiaopi looked pretty pleased with himself - but it seems his amorous activities have taken a toll on the poor feline, as he needed a glucose drip to help him to recover.

Owner, Mr Zhao, has not seen the funny side though - claiming that the pet hotel was negligent and should not have allowed the excitable tom to roam so freely. But images of the blissed-out Xiaopi after his night of passion have gone viral.

Cats are the internet's best friend.

The combination of cute fluffiness and oddly nonchalant attitudes make them perfect fodder for the online world.

But owning a cat isn't all rainbows and sunshine.

In fact, as any cat-owner will tell you, a feline pet can be a real pain. For some reason, cats don't seem to like being told what to do.

And one cat has hit headlines this weekend.

And for a pretty hilarious reason, too. Xiaopi, a Russian Blue from south China, has a certain (and very intense) passion.

Xiaopi was staying in a pet hotel.

His owner, Mr. Zhao, needed his cat cared for over a weekend and decided that leaving Xiaopi with a selection of his peers would be a good idea.

But there was just one problem.

Xiaopi was unneutered - meaning he had quite the sexual appetite.

And Mr. Zhao made this known.

He claims that he had told staff about Xiaopi's... condition - and that it would mean that he needed to be kept alone at night.

But it seems like the pet hotel didn't take him seriously.

"I thought they'd be professional, but the staff member didn't feed Xiaopi during the day and let him out to roam freely at night," Zhao reportedly shared on social media.

Which meant that XIaopi was left with a little too much freedom.

"That's right, all the cats were free to walk around the shop and then the employee went home."

And for Xiaopi, that meant one thing.

The randy feline couldn't help but going on a mission - of the romantic variety.

Here's the cat in question.

Although, after a night of passion, Xiaopi looked a little bit different.

According to Zhao, Xiaopi was very busy.

And that's the best-case scenario.

"Those are only the ones I could see in the CCTV footage," meaning there could be a lot more.

And while it does make for a good story, there's actually a more serious side to this problem.

Because you know what happens after cats mate, right?

That's how kittens are made. Which is all well and good - except for the fact that many of these cats were not planning on having kids.

And that wasn't the only problem.

Because after a night of (at least) five partners, Xiaopi wasn't in the best state, either.

In fact, the cat was medically drained after his escapades.

Zhao described his pet as "exhausted and on a glucose drip."

And this doesn't come cheap.

Luckily, after initially trying to blame Zhao, the pet hotel has taken the blame and offered to pay for the medical treatment.

"They had the nerve to be upset with me. They wanted me to explain the situation to all the other owners."

Because it wasn't just Xiaopi who's been affected by the hotel's incompetence.

Because the issue of the potential kittens could mean big money.

"They're going to compensate each pregnant cat's owner 500 Renminbi (£56), and have promised to sell any kittens on their behalf. The other owners have also told me they'll either give me a kitten or 1,000 Renminbi (£113) if their cats turn out to be pregnant."

Russian Blues are an expensive pedigree.

And a kitten in the coveted breed can cost well over $1,000. Want to see more cute cat content? Keep scrolling to read about the curly-haired breed that has the internet going wild.