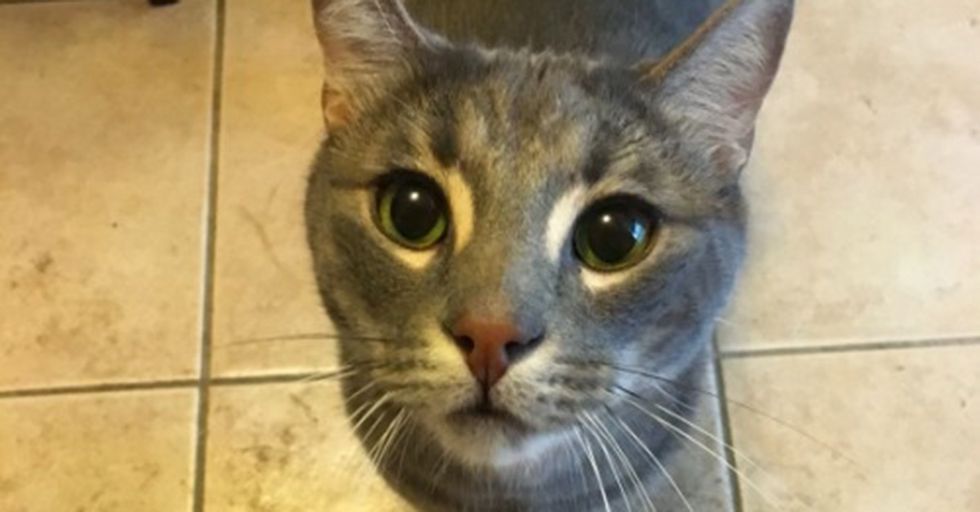 When you're in charge of looking after just one or two cats (or even kids)...

...you don't need much help in distinguishing which is which. But if you're in charge of several different animals, all with their own appearances and personalities, it helps to have a reference tool to keep them all straight.

One cat owner was quick to realize this, so when she prepared to leave town, she took an extra step.

Not only did she describe to her unfamiliar catsitter what her pets looked like, but she did so in a pretty hilarious way. As you'll see, the colorful descriptions aren't JUST funny. They're also pretty darn accurate after seeing the cats themselves.

"All gray. The most handsome cat you've ever seen. Looks like a cat that was drawn by a Disney animator." Yeah, that's a pretty good description. I think it's the big, expressive eyes that give it a Disney-type appearance.

"All black. No tail. Looks like a cat that was drawn by a person who has a vague idea of what cats look like but in reality has never seen one." Well...maybe. I was thinking there would be more of a Harry Potter tie-in here, but I think Dobby looks ENOUGH like a cat that no one would get confused, right?

"Gray and white. Obese. Still adorable. Looks like Tony Soprano. Probably the mob boss." Not only is this an awesome description, but this one in particular is great because it shows how people who are in a hurry give instructions. No time for subjects or complete sentences, just getting the info out there as efficiently as possible.

"Calico. Looks like she would speak with a squeaky voice. Very short. Will use her nails to love you." Yikes. It was all fun and games until that last part. At least the catsitter got a warning here! Hopefully, the person charged with caring for these critters managed to avoid Dixie's nails and Wilson's hit men to have as much fun watching these cats as their owner did in writing up their descriptions!