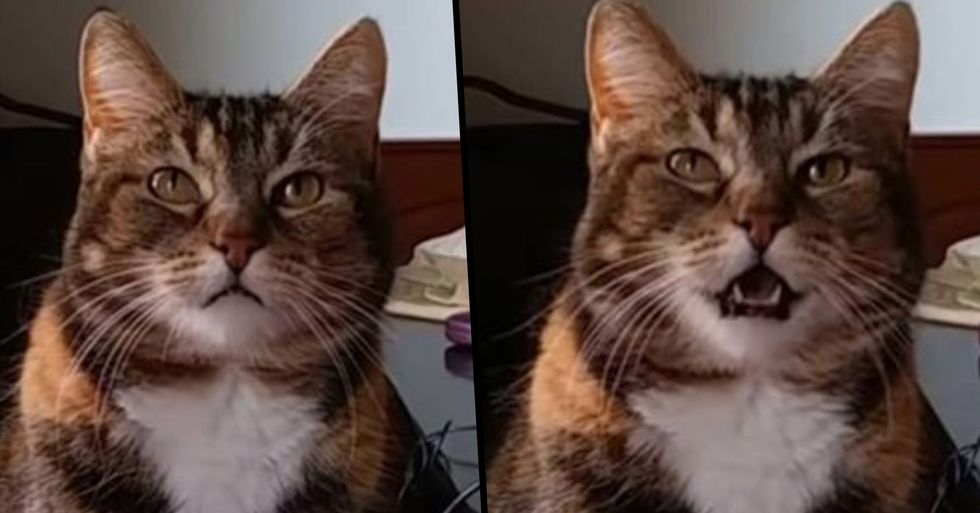 Cat Says 'Uh Oh' When She's out of Food

But this one hungry kitty might be the cutest we've ever seen.

As one feline has proven this week.

This is a cat with a difference.

And a rather unique talent!

This is a cat with a big appetite.

And when there's no food left, she has a unique method.

Because it's pretty unbelievable.

When Bacon's food bowl is empty...

She's learned how to signal that it's time for more food.

She simply utters a very clear and distinctive sound.

We were skeptical too - but it really sounds like she says it!

And hey, if it gets the desired result...

We can totally see why Bacon has learned this impressive skill!

Bacon’s owner Barbara Jones, explained to The Dodo, "When we get up in the morning and go to feed her, without thinking we would say, ‘Uh-oh! your bowl is empty’. Out of the blue one morning, she said ‘Uh-oh’ first very clearly!"

They then tried to get Bacon to repeat the word.

But she refused - being a typical stubborn feline.

But they weren't waiting too long for another utterance.

The next morning, when food was lacking once more, Bacon piped up with "uh oh" once again.

It is rather freaky stuff!

It seems she's always been a chatty cat.

"I heard a kitty just yelling outside my apartment. I opened the door and she ran in. Bacon picked me." Fancy more cute cats? Scroll on for the one-eyed kitty searching for a forever home...
20%