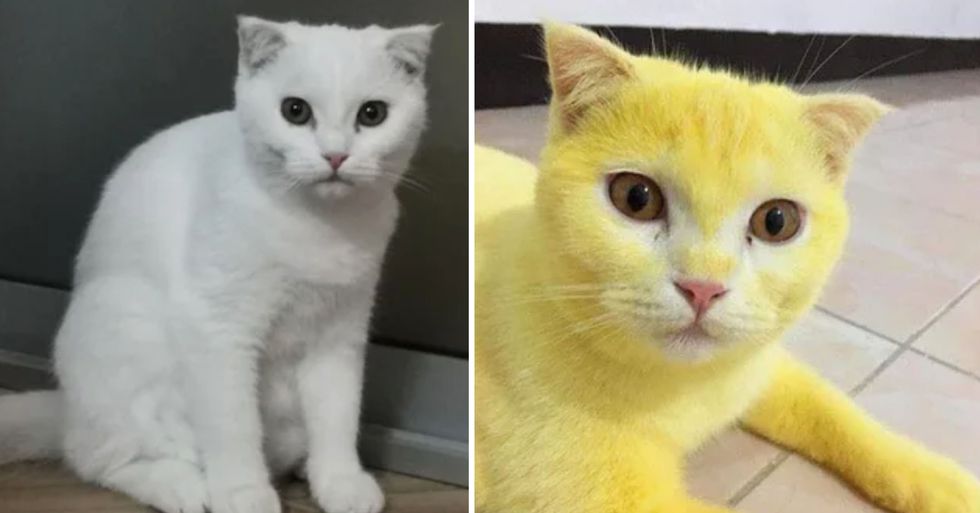 Although mainly advertised towards humans, one pet owner decided to treat her cat using turmeric, and the results are beyond hilarious...

Herbal remedies have been used for centuries.

Any ailment you can think of is almost certain to have a natural solution.

Plants have been the basis for medical treatments through much of human history.

And such traditional medicine is still widely practiced today.

Many people think that using plants to treat illness is safer than taking medicine.

People have been using plants in folk medicine for centuries.

It is easy to see the appeal.

Although it isn't always the best solution.

One of the most well-known herbs is turmeric.

And it's widely known for its anti-fungal and anti-bacterial properties.

Although it's usually humans that use these herbs.

One woman decided to use it on her cat.

The results are hilarious...

I mean this is hands down one of the prettiest cats I have ever seen.

Thammapa Supamas from Thailand decided to apply a turmeric scrub on her white cat.

Due to him having a fungal infection.

This is her cat before the turmeric wash...

She took a few before pictures, and we're glad she did.

The medicinal herb is fantastic at treating infections.

And saves more than a few dollars on vet bills.

Supamas experimented with a turmeric scrub to see if it would help clear her cat's infection.

Before moving on to more expensive treatments.

And it seemed to have worked.

Although as you can see, the bright yellow stain seemed to have ruined her cat in the process.

And this is the result:

One user commented that the cat looks like Pikachu.

And since then, the pictures have grown in popularity.

The owner decided to photoshop Pikachu features onto her cat...

I have to admit it's kind of cute.

Even though I do feel kind of sorry for her.

She doesn't seem too bothered by the dye-job.

And if anything, Supamas doesn't need to worry about losing her cat now.

She seems to be getting used to her new color.

And her leg is healing nicely.

She actually seems pretty chilled about the whole experience.

For more cat-related content, keep scrolling to see the cat whose fur has turned into the most incredible marble color after turning 7 years old. You won't believe it...