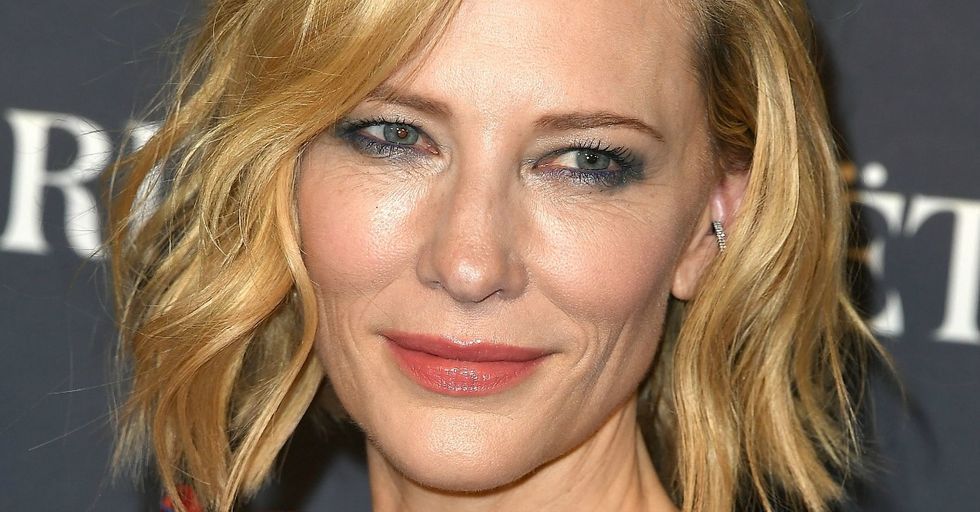 It seems like everyone should be more socially enlightened by now, but unfortunately, there are still a bunch of people out there who think that it's okay to disrespect a person because of the clothes they're wearing.

Cate Blanchett roasted sexual assault perpetrators like Harvey Weinstein about this in a biting speech at the InStyle Awards Monday night in LA. She didn't say the bigwig's name directly, but it's pretty clear that the speech was pointed at him and men like him who abuse their power to take advantage of women.

She applauded women who dress unapologetically and don't wait for anyone else's approval to express themselves. And most importantly, she said that women don't dress to please men.

Women dressing a certain way is not an invitation.

Cate used a colorful metaphor involving none other than Steve Bannon. She said, "No one says to Steve Bannon: 'You look like a bag of trash, do you want me to throw you out?'" She added, "...But the comments that get said about the women on the red carpet... [are horrible]".

Cate celebrated women that wear, "What they want, how they want, and when they want to wear it."

She applauded women who set an example by having a presence that isn't self-conscious. It's not an easy feat in a world that is constantly tearing women down for their appearances. Whether people think women are too fat, too skinny, too natural, too done-up, too sexy, or too prude, audiences find a way to pick at women's choices.

"I mean we all like looking sexy, but it doesn't mean we want to f**k you," said Blanchett.

We know there will be comments on this article and other articles about sexual assault saying that women wouldn't get assaulted if they wore more conservative clothes.

People love to say that victims of sexual violence were asking for it. That maybe if women wore longer pants or more pastels or less eyeliner, sexual assault wouldn't happen. Sexual assault would still have happened to those women if they were bundled up in winter coats like Ralphie in a Christmas Story. You know what would stop those assaults?

IF THE PEOPLE ASSAULTING WOMEN WOULD STOP HECKIN' DOING IT. THAT'S IT.

That's the whole solution. And it doesn't have to do with women's clothing choices.