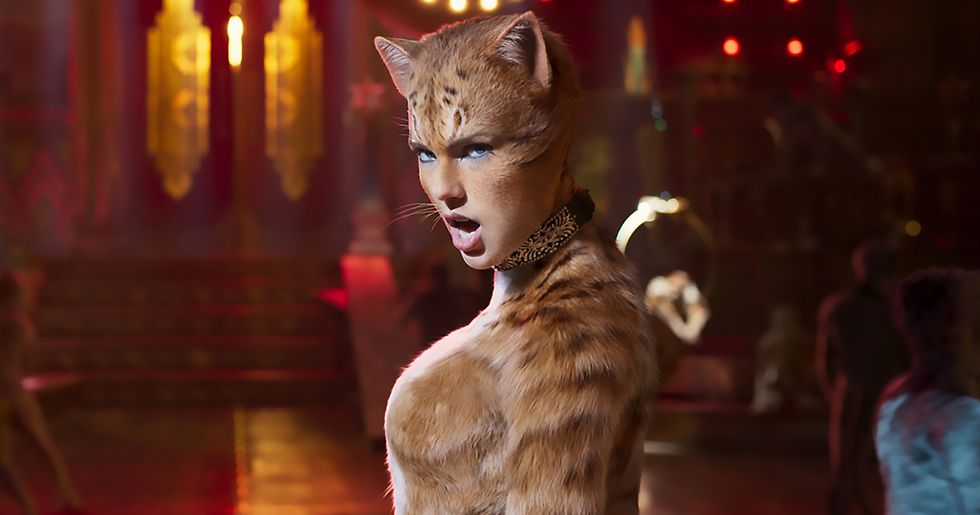 Cats (the musical) is coming, and we can either run away and hide under the bed, or embrace it like the strong, independent felines we all are. If you're totally unfamiliar with Andrew Lloyd Webber's absolutely insane musical about a bunch of singing cats (like I was before this whole thing started), I'm going to help you out. You too can crash in nose deep to whatever insane, creepy, cat-lover's paradise this movie will be.

Through the power of Twitter, writer and part-time comedian Hannah Woodhead introduced us, one by one, to the characters of Cats. And it's as wild as you'd expect.

From cats that can sing and dance, to cats that I'm pretty sure exist just to become memes, we're about to take a deep dive into one of the weirdest movies on 2019 and have a blast while doing so. So queue up your favorite performance of Memory, and get ready to dive in head-first to this mystery of a movie.

Let's start off with the characters, and then maybe we'll get into some of the *NO SPOILERS* plot.

THIS IS VICTORIA! SHE IS THE BALLERINA KITTEN! SHE IS PURE OF HEART AND IS THE FIRST CAT TO TOUCH GRIZABELLA! MORE… https://t.co/H5LF0Z0vxq
— hannah woodhead (@hannah woodhead)1563529195.0

First of all, what is a Grizabella? Who is a Grizabella? I'm already out of my depth. Also, no need to adjust your settings. There's going to be a ton of all-caps in these tweets. It's the way of the world, now.

Ah yes, the Judi Dench cat. Every movie needs one of those.

THIS IS OLD DEUTERONOMY! ORIGINALLY PLAYED BY BRIAN BLESSED! JUDI DENCH IS THE ONLY SUITABLE REPLACEMENT! HE IS THE… https://t.co/2Wfey28mt1
— hannah woodhead (@hannah woodhead)1563529293.0

The big question: Is Judi Dench playing a male cat? If so, I'm here for it. If not, I'm also here for it. We stan for Judi even though she's basically a walking skeleton at this point. Love you, Judi.

Okay, update. Grizabella is a cat.

THIS IS GRIZABELLA! SHE SINGS MEMORY! SHE IS OSTRACISED FOR SOME REASON THAT IS NEVER QUITE EXPLAINED! SHE WAS ORIG… https://t.co/VEgYus230g
— hannah woodhead (@hannah woodhead)1563529443.0

I honestly think they cast Jennifer Hudson on the back of her Dreamgirls performance alone, and I'm strangely okay with that.

What I'm not okay with is James Cordon in any capacity outside of the driver's seat of a car.

Also, this might be controversial, but I want to see that mustache in the movie. If I don't, I might cry. But I cry a lot in movies anyway.

How do I become this next cat?

The answer is "become Jason Derulo?" Okay, well that's not going to happen any time soon, so I guess I'm screwed.

This cat has the word "Cavity" in his name, so he's automatically my least favorite cat.

THIS IS MACAVITY. HE IS THE 'EVIL CAT' WHO DOESN'T SING. HE JUST SORT OF HANGS AROUND LOOKING MENACING SO ACTUALLY… https://t.co/zX5AUfolU5
— hannah woodhead (@hannah woodhead)1563529819.0

But he's also being played by Idris Elba, making him my favorite. They're secretly all my favorite.

Ian McKellen is in this movie and plays an adorable cat. So I'm seeing it opening night.

I wonder if his pee smells like cat pee or asparagus pee. Either way, I'm sure it's terrible.

THIS IS BOMBALURINA, THE ~FLIRTY~ CAT. PLEASE REMEMBER TO SPAY AND NEUTER YOUR CATS BECAUSE AN UNSPAYED FEMALE CAT… https://t.co/nPTr8IXqqE
— hannah woodhead (@hannah woodhead)1563530112.0

If this cat breaks out an acoustic guitar, I will lose it.

I swear everyone and their mom is in this movie. What is this cast?!

THIS IS JELLYANYDOTS. SHE IS THOUGHT TO BE A LAZY CAT BUT ACTUALLY RULES ALL THE MICE AND COCKROACHES AND MAKES THE… https://t.co/DAJzW3HoXF
— hannah woodhead (@hannah woodhead)1563530257.0

Like, Rebel Wilson went from playing the gross roommate in Bridesmaids to playing the cross cat in Cats. Is there anything she can't do? That sounds like I'm taking a shot at Rebel Wilson, but I actually love her.

This cat has the second-best song in the musical, and I don't give a crap.

THIS IS MAGICAL MR. MISTOFFOLEES. HE HAS THE SECOND BEST SONG IN THE MUSICAL. HE IS A MAGICIAN AND KNOWS SLEIGHT OF… https://t.co/c7qWh7jIxk
— hannah woodhead (@hannah woodhead)1563530405.0

He just looks so boring. The kind of cat that you put food out for, and the food gets eaten, so you're sure it's alive, but you never see it. The worst kind of cat.

How many characters are there in this freaking musical?

I AM FAIRLY SURE THESE ARE RUMPLETEAZER AND MUNGOJERRIE, THE CAT BURGLAR TWINS. THEY'RE FUN https://t.co/0ZPTbIz3a4
— hannah woodhead (@hannah woodhead)1563530947.0

Also, aren't all cats twins? Isn't that what a litter is? I can't get behind this choice.

If this character doesn't open up a storybook and start telling us the story of Cats, I'll be really upset.

THIS IS MUNKUSTRAP, THE STORYTELLER. JUDGING BY THE TRAILER HE IS 500% DONE WITH YOUR BULLSHIT https://t.co/37GSFqXWTq
— hannah woodhead (@hannah woodhead)1563531040.0

I need another framing device like Peter Falk and Fred Savage in The Princess Bride. My body craves it like plants crave the sun, or cats crave pointless musical numbers.

I HAVE A *FEELING* THIS IS GROWLTIGER. HE IS A ROLE PLAYED BY GUS THE THEATRE CAT IN HIS YOUTH. USUALLY PORTRAYED A… https://t.co/6noGB4AQks
— hannah woodhead (@hannah woodhead)1563531224.0

There are so many freaking characters in this movie that even the experts get them mixed up. Can't wait for my local theater to hand out a pamphlet with all of this info before I walk into the movie.

Of course, there's a railway cat.

Why is a cat wearing a waistcoat, and how is it iconic? Cats don't wear coats. They're not like dogs. They don't allow us to dress them.

Of phew, they ditched the coat for the movie.

But gave him overalls. Because why not?

Okay, so what the heck do all of these cats even do in this musical?

SO our story begins on the night of the Jellicle Ball™! The cats begin to frolick on their oversized stage and then… https://t.co/JZaHEZnKrl
— hannah woodhead (@hannah woodhead)1563573075.0

Okay, so you're telling me the humans are supposed to be the creepy ones in this musical?

Or maybe everyone in this musical is terrifying and that's part of the appeal.

Honestly the introductions take a very long time? Like everyone has a song it’s literally the musical equivelent of… https://t.co/xwj5sTGHlx
— hannah woodhead (@hannah woodhead)1563573187.0

Oh no. I can't imagine introducing five-thousand cat-characters would take "a very long time." I love that they all get their own songs though. I imagine some of them are just two-second "songs" of them announcing their names.

So something bad has to happen, right?

With all the introductions done, the cats have their ball. It goes well. Until Macavity turns up and kidnaps the le… https://t.co/OM0vlauelp
— hannah woodhead (@hannah woodhead)1563573572.0

The whole plot of Cats is basically, "a cat does a cat thing, other cats respond." Sold.

Macavity returns disguised as Old Deuteronomy to fuck with the cats some more but they ain’t having it. So they hav… https://t.co/2yWmgiPyKF
— hannah woodhead (@hannah woodhead)1563573758.0

So you're telling me Idris Elba is about to cosplay as cat-Judi Dench? I can't decide if this is my most anticipated movie of 2019 or my least.

So how do they save Judi Dench? Through the power of love or something?

So they prevail upon MaGicAl Mr MiStoFfoLeEs, the magician cat, who brings back Old Deuteronomy THRU THE POWER OF D… https://t.co/oxKJiNxsBM
— hannah woodhead (@hannah woodhead)1563573879.0

Okay close enough. Through the power of dance is basically the broadway version of power of love.

This is where I get lost.

With Old Deuteronomy back in business, it’s time to make The Jellicle Choice™ which will enable one of the Jellicle… https://t.co/3gA8VrHZI8
— hannah woodhead (@hannah woodhead)1563574017.0

It's about time for a twist.

That's the ostracized sex-cat if you didn't want to have to scroll back to figure it out as I did. Played by Jennifer Hudson. Get ready to cry.

Wait, why did she come back?

She belts out Memory (the one song every theatre kid would insist on performing every talent show) and honestly it’… https://t.co/yeWkNqdfeg
— hannah woodhead (@hannah woodhead)1563574248.0

Oh, you're telling me the Heaviside Layer is actually heaven? They were just going to kill one of their own cats?! Why?! These questions and more will be answered when I inevitably watch the movie on Christmas Day while hiding from my family.

Dear Mr. Elliot. I recognize that you are no longer alive, but might I suggest that you stick to writing poems and stop writing about cats while on drugs. Thank you.

This describes me accurately.

One thing I know: this movie is going to be just as insane and weird as the trailers make it out to seem. I can't wait. My confusion has never been more excited.

This has concluded our coverage of Cats: the Musical.

A few people have complained that introducing the Cats of Cats defeats the purpose of Cats. An alternative take: I… https://t.co/X8ou14uXMc
— hannah woodhead (@hannah woodhead)1564088045.0

We hope you enjoyed the show. Because if you didn't we'll send scary anthropomorphic cats to your home to intimidate you.

Did I get any details of this wrong?

Let me know in the nicest way possible because honestly, I would be so embarrassed to get any detail about this Tony Award willing musical incorrect.

And are you as pumped to see Cats as I am?

What? You're more pumped? Impossible! Let me know which cat you most identify with. Personally, I'm going with Jellyanydots because I'm feeling really lazy right now. I'm gonna go eat some catnip.