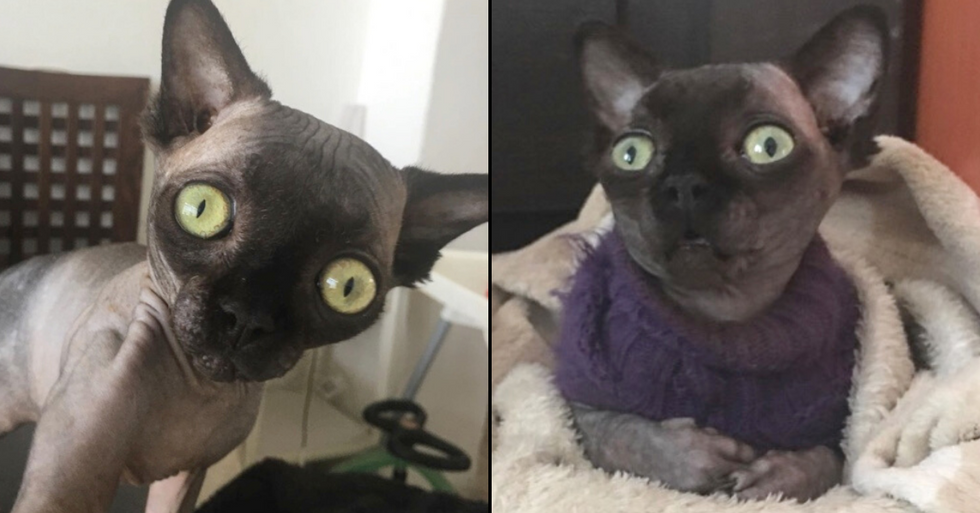 Cat's Rare Condition Means She Looks Like a Baby Bat

Cats are some of the nation's favorite pets and it's not hard to see why... they're adorable. This week, one kitty has found internet stardom for her unusual appearance.

Keep scrolling to read all about her story and the difficulties she's overcome. It's not been an easy road for this adorable feline...

And there are new breeds being discovered every day.

Take these “Poodle Cats," for instance.

That's why we love them, right?

Lucy has a rare condition that makes her look a little bit different to her other kitty pals.

In fact, a ton of people say she looks like a baby bat.

Lucy's owner, Zilla Bergamini, fell in love with her when she saw a video of her from a cat breeder friend.

But was left disappointed when she was told Lucy was sick and therefore not up for sale.

Lucy had been diagnosed with hydrocephalus.

Speaking to Meow AF, Zilla explained that Lucy had been taken to the vets, where she was diagnosed with hydrocephalus – a condition that causes fluid build-up in the brain.

Despite her condition, Zilla decided to move forward and adopt Lucy as it was "love at first sight."

And last year, at just 2-months-old, Lucy finally moved to her new home in Haifa, Israel.

But, concerns began to grow within the first few days...

Zilla became increasingly worried about Lucy when she realized the feline hadn't been to the toilet and was crying constantly.

So, Lucy was taken back to the vet.

There, Zilla was told that Lucy would need eye drops for the rest of her life. Although, they couldn't figure out why she hadn't been going to the toilet.

After seeking treatment from another vet...

They discovered that Lucy's bowels had been leaking 24/7 - meaning the kitten had to wear a tiny nappy and spent most of her time in Zilla’s arms.

Once that side of things were under control, Lucy was taken to a specialist.

Zilla was told that the hydrocephalus had caused Lucy's skull to grow in an unusual shape, which caused her eyelids to irritate her corneas. Unbelievably, her eyes were fixed and she no longer needs the daily drops - despite being told she would need them for the rest of her life.

Lucy is now living her best life, despite her condition.

She's become something of a celebrity online.

The feline-turned influencer now has more than 22,000 followers.

What an adorable kitty. Keep up with the latest wholesome news by following us on Facebook. Want more adorable animal content? Keep scrolling to check out the most usual animal friendships. It’s a truly wholesome read…