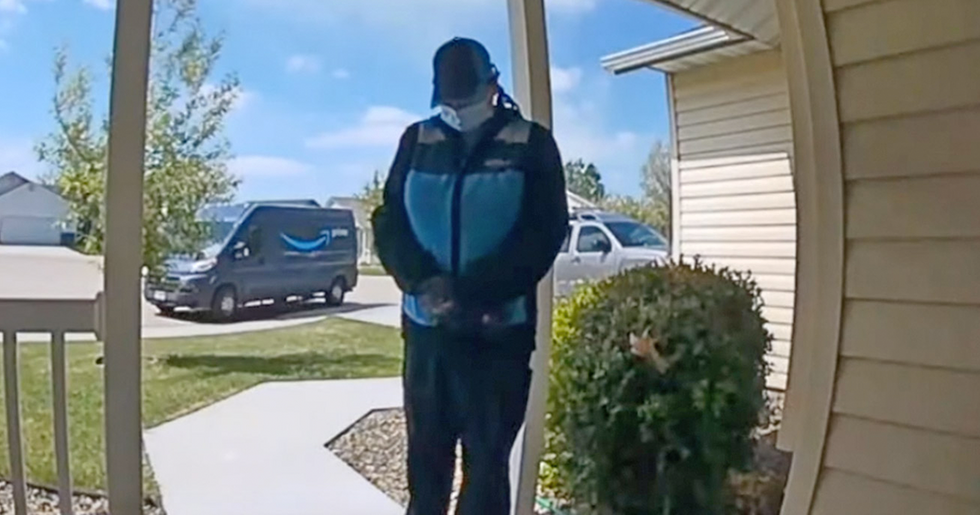 A couple's RING doorbell captured the beautiful moment when an Amazon delivery driver stood outside their home and sent a prayer for their unwell baby.

The heartbreaking footage of an Amazon delivery driver taking a moment to pray for her baby has captured hearts all around the world...

And it truly goes to show the difficulties that delivery workers for Amazon are going through right now.

Jeff Bezos, the founder and CEO of Amazon, is the wealthiest man in the world.

Bezos is a multi-billionaire... soon to be a trillionaire.

And, according to Forbes, his current net worth stands in at around $146 billion. The only man close to matching this eye-watering figure is Microsoft co-founder, Bill Gates, who is worth around $113.1 billion.

The initial success of the online store back in 1994 was staggering. Within the first thirty days, Amazon.com had sold books all across the United States, and across forty-five foreign countries.

In mere years following from its launch, Amazon.com began stocking a wider variety of products, such as electronics, clothing, and toys, making it the number one online retailer. And, as of this year, the company alone has been reported to be worth $1000B.

During this global pandemic, he's really shown his true colors.

He's been criticized by the public on social media after setting up a relief fund which the public can donate to for his employees that are working during the outbreak.

The Amazon Relief Fund was set up to assist "employees and partners."

It was created with twenty-five-million dollars from the e-commerce company to help those who are responsible for delivering goods across America.

"Supporting our US-based Delivery Associates employed by Delivery Service Providers, our Amazon Flex Delivery Partners, and Associates working for Integrity Staffing, Adecco Staffing, and RES Staffing, and drivers and support team members of line haul partners under financial distress due to a... diagnosis or quarantine."

The company did contribute a fair amount to the fund.

Reminder that Jeff Bezos sold $4 BILLION worth of Amazon stock at the beginning of February 2020 https://t.co/wz8EegiVXK
— Billionaires (@Billionaires)1585075742.0

But the company wrote on the fund's website: "While we aren’t expecting anyone to do so, you can make a voluntary donation to the fund if you desire to do so."

However, before changing the wording, they encouraged people to donate by text.

Understandably the relief fund attracted a lot of backlash online. One Twitter user wrote: "How is your company worth over a TRILLION dollars and you want the public to donate to an employee relief fund?! As if Amazon can’t pay their employees themselves."

"Jeff Bezos makes 9 million dollars every hour. He can take an evening nap and make more than you will in your entire lifetime. Amazon hasn't paid federal taxes in years. But he wants you to donate so Amazon workers can take sick leave."

Times are now harder than ever for the unfortunate employees of Amazon...

And those who have kept their jobs are working unimaginable hours and overtime.

Amazon delivery drivers in the United States have been working around the clock to deliver millions of lockdown packages...

And many of us have been eager to leave kind gestures of thanks to these key workers, such as notes and candy.

But one Amazon worker has captured hearts all around the world recently...

For the most devastating of reasons.

A RING doorbell camera outside of an Idaho home captured the amazing footage.

Raquel and Derek Pearson captured the exact moment when Monica Salinas dropped off their parcel and then paused for a moment.

Raquel and Derek's 8-month-old son Lucas lives with an aberrant right subclavian artery (ARSA), a type of congenital vascular anomaly that has made him very unwell.

The couple recently decided to pin a note on their door to thank delivery drivers who have been delivering Lucas' medication, which read: "We have an infant with medical needs and online deliveries are essential to his health. You are helping keep our son alive and well."

The parents are now relying on delivery drivers more than ever.

"He needs special thickeners to be able to eat, otherwise he aspirates his milk, so we really depend on getting all of these supplies online so we don't have to go out to the store and bring a virus home," Raquel told KTVB. "We just want to minimize exposure to the virus."

When Monica delivered the parcel, she took a few moments to quietly send a prayer.

She stood motionless for several seconds until she did the sign of the cross before walking back to her van.

Raquel spoke to KTVB about the encounter...

She said: "I noticed that she was standing there, and I didn't really realize what she was doing until I saw her doing the sign of the cross. I was like 'Oh my gosh, she was praying'. I kind of choked up a bit."

The fact that Monica took time out of her busy schedule to send a prayer for the family truly touched the couple.

"It's been really hard to get through this, so I'm really touched that a stranger would take time out of her day to wish our son well like that," she said. "It just meant a lot that she took that time out of her busy day to pray and send positive vibes to Lucas and our family," added Derek, "I was really touched by it."

And it seems that Requel and Derek aren't the only ones touched by this kind gesture.

@CBSNews A small example for sharing love to another family. Showing kindness. Blessings to all and let's stay safe.
— Dayana Rodriguez (@Dayana Rodriguez)1590559549.0

Twitter has been left overjoyed with Monica's kind act, and people have been sending in their messages of praise and thanks.

The subject turned back to Bezos and how he should be putting his workers like Monica first.

Watch the footage of Monica here...

"We have a sign on our door thanking delivery personnel for bringing us our supplies because we have an infant with… https://t.co/GoCEQ3a6zO
— CBS News (@CBS News)1590503986.0

We wish Lucas and his family a speedy recovery during these difficult times.