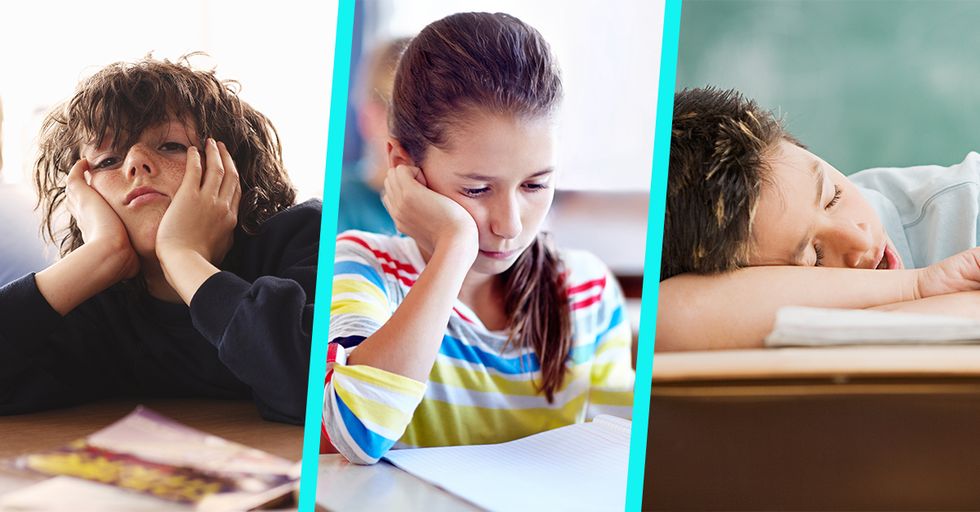 There's currently no set standard for what time the school day starts. Middle schools and high schools across the U.S. start anywhere between 7 and 9 a.m., most at the earlier end of the spectrum. For many parents familiar with the shift from elementary school to an earlier start time in middle school, it feels counterintuitive that just as kids reach adolescence and begin to sleep later, they're required to get up earlier. Research supports the idea that later start times match up with teens' natural rhythms, and there are now many communities are rallying to push back the start times for middle and high schools.

Little kids come out of their rooms in the morning like...

When our kids are little they're up with the sun. Their apparent allergy to sleep in lasts for years.

But for teenagers, it can take extreme measures to get out of bed in the morning.

As soon as they hit adolescence, kids' natural rhythms change. Gone are they days when they bound out of bed at dawn. They stay up later and need to sleep later to compensate.

via: Sleep to Live Institute

Research shows that teens still need 8.5 to 9.25 hours of sleep. With schools starting as early as 7 a.m., it's just about impossible for them to get enough sleep. What teenager do you know who's going to bed by 9 p.m.? Changing brain chemistry actually makes falling asleep early more difficult for them. And there's homework, extracurricular activities, and socializing to squeeze in before bed...

Teens in the U.S. are chronically tired.

Because they stay up late and need to wake up early, our young people are not getting the sleep they need to function. Chronic lack of sleep isn't good for anyone, especially the developing minds and bodies of growing kids.

Difficulty getting up in the morning is the least of the problems.

Creating an environment where our adolescents and teens are chronically overtired is dangerous for them. Research by the Centers for Disease Control and Prevention and the American Academy of Pediatrics shows that lack of sleep increases kids' risk of depression, suicide, drug and alcohol abuse, obesity, cardiovascular disease, metabolic dysfunction, and the chances of being involved in a car accident. Sleep is a big deal!

Not surprisingly, teens are underperforming in school as well.

Kids who aren't getting enough sleep don't arrive at school ready to learn. The first couple of hours of the day, they're still struggling to wake up and be alert. Because of this, there's a growing movement to push the start times for middle and high schools back to later in the morning.

Some communities have already made the shift.

The logistics of changing start times are complicated.

With all the evidence pointing to the benefits of later start times, why are so few schools taking the plunge? The drawbacks are less about the kids and more about the logistics. Changing the start time in many districts means reorganizing bus routes, which can prove difficult as the elementary, middle, and high schools often share the same buses but use them at different times. Other complications include difficulty for parents who will need childcare or will no longer be able to drop kids off at school on their way to work, increased traffic due to buses being on the roads later in the morning, and scheduling conflicts with extracurricular activities. All of these boil down to increased costs.

So the choice is between tired kids in school or inconvenience.

The shift to later start times undoubtedly comes with come added costs and complications. Early adopters will have added challenges as they try to schedule athletic and other events with schools in districts with different schedules. But, for those who have already made the shift, the benefits seem to outweigh the costs.
Jayne Ellspermann, a principal in a Florida school district which changed its start time from 7:10 to 9:30 a.m. in 2004, says, “It complemented the rhythm of the adolescents because it really enabled them to begin their school day at a time when they were primed and ready to learn. They’ve had a chance to get up, be awake, they were ready to engage and learn right away. There wasn’t that slump or fatigue. They were a lot happier about coming to school as well."

Our kids are suffering.

Just because something has always been done a certain way doesn't mean it's right. The growing pains associated with making the shift will be temporary, but the benefits to our kids and communities would be lasting.

Are later start times the way to go?