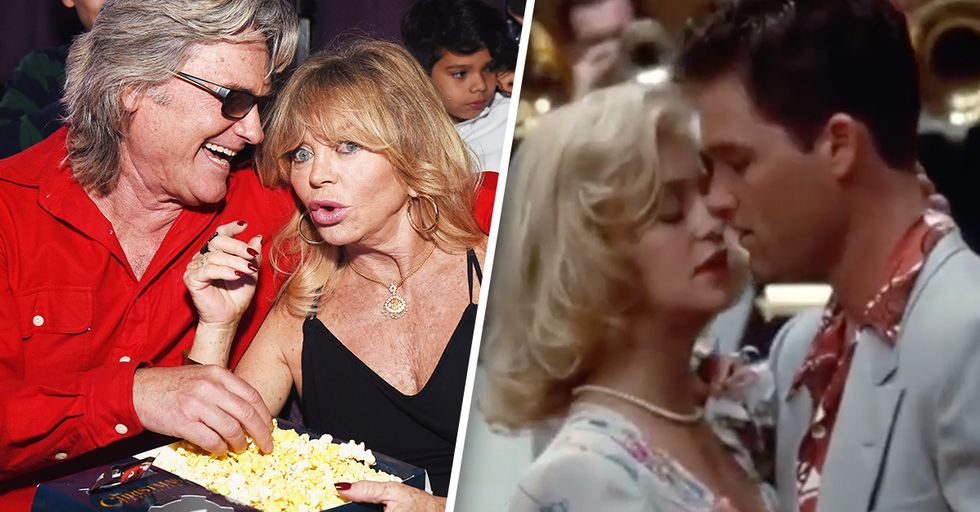 Celebrities Who Fell in Love While Filming a Movie

It is hard to meet people at all these days, let alone meet your soulmate. Whether you are spending your time scrolling through about a billion different online dating apps or going out into the world to meet people the old-fashioned way, you never seem to find the right person– the Mr., Mrs., or Mx. Right. That sort of relationship only happens every once in a while.

So, you can imagine that it happens even less when you are famous. Celebrities arguably have a tougher time dating than us "regular" folks. There are a lot of complications that go along with a life of fame– and sometimes, the only other people who understand what you are going through are other famous people. So, it makes sense that celebs gravitate toward each other. Plenty of people who end up in relationships meet at work, but it's a slightly different and more intimate situation if you are acting together. And sometimes that on-screen chemistry transforms into a real-life romance.

This is a list of famous celebrity couples that all met while on set for the same project.

Not all of them are necessarily still together. But there is no denying the power of acting together in an emotional film or television show.

Will Smith and Jada Pinkett-Smith

Will and Jada, or as I like to call them, Lord and Lady Hollywood, met on the set of The Fresh Prince of Bel-Air in 1994. Jada auditioned for a small part in the show, and she ended up snagging a giant place in Will's heart.

Game of Thrones isn't what you would call "babymaking television." It has way too much snow and blood for that. But Rose Leslie and Kit Harington managed to find love, so I guess I know nothing.

Lauren Morelli was a writer on Orange Is the New Black, and Samira Wiley was one of its stars. They met working together, and the rest is really ridiculously good-looking history.

This pair is Hollywood royalty like none other. I'm pretty sure we all want to be adopted by Kurt Russell and Goldie Hawn. They actually met in 1968 on the set of The One and Only, Genuine, Original Family Band, but they didn't get together until they were on set together again ten years later for Swing Shift.

These co-stars of The Big Bang Theory had their own big bang when they got together in real life. And although the pair has split in real life, their characters are married. I hope that's not too awkward for them.

The two most attractive people in the world finally found each other on the set of The Dream House. And now they're married and have adorable children.

They may not be together anymore, but our Disney Channel dreams came true when Zac Efron and Vanessa Hudgens got together while filming High School Musical.

Natalie Portman met her choreographer husband on the set of Black Swan. She loved his amazing dancing and he loved how adorably she could pull little feathers out of her fingernails.

The one good thing that resulted from the set of Green Lantern is the beautiful, hilarious relationship that Blake Lively and Ryan Reynolds have. They are both goofballs who happen to also be chiseled gods.

Javier Bardem and Penelope Cruz met on the set of Jamón Jamón in 1992, and they've been together ever since. In fact, the indomitable pair starred in a movie together this year!

Speaking of couples who are in it for the long run, these two lovebirds met on the set of I Know What You Did Last Summer. Not the most romantic movie, but hey, love happens when you least expect it, as does being slashed to death by a serial killer.

While their relationship was brief, it was iconic. And we have the set of Edward Scissorhands to thank for these two getting together.

Ryan Gosling and Rachel McAdams are no longer together, but they fell for each other while working on The Notebook. I mean, how could you not fall in love while running to each other and kissing in the rain for like, 60 days straight?

Ryan Gosling seems to have a habit of picking up his co-stars, but this one seems to be sticking. Gosling and Mendes met on the set of The Place Beyond the Pines, and now they have babies and are adorable and stuff.

Vincent Kartheiser and Rory Gilmore herself met on the set of Mad Men, and now they live a very private, very cute life together. I feel like I could be friends with them.

Claire Danes and Hugh Dancy met on the set of Evening in 2007, and they've been an item ever since. They got married in 2009 and are very clearly made for each other.

Miley and Liam's journey has been quite the rollercoaster for me, personally. They got together on the set of The Last Song, and then they broke up, and now they're together again. I'm really rooting for them.

Brangelina is no more, but you can still feel their raw chemistry when you watch Mr. and Mrs. Smith, the movie that they met while filming.

Brad Pitt had quite a few high profile relationships, including his engagement to Gwenyth Paltrow. They met while filming Seven.  I wonder if she screamed, "What's in the box?!" when he got down on one knee with the ring.

Before Brangelina, Angelina Jolie had a strange romance with Billy Bob Thornton after they met on the set of Pushing Tin.

They played siblings on Dexter, but apparently, that on-screen siblingship didn't do much to deter Michael C. Hall and Jennifer Carpenter from falling in real-life love.

Jennifer Aniston's relationships have been tabloid fodder for decades, and one of the ones that made many people cock their heads in confusion was her romance with Vince Vaughn, which began when they worked together on The Break-Up.

One of Jen's longest relationships was with Justin Theroux. They got together on the set of Wanderlust, which is a super fun movie.

They might not be together anymore, but Channing Tatum and Jenna Dewan were a powerhouse couple ever since they met on the set of Step Up. They danced their way into each other's (and our) hearts.

Days of Thunder was the movie that brought Nicole Kidman and Tom Cruise together. And while their relationship seems like a lifetime ago, it's one that I still think about on the reg.

These two gorgeous people got together after they acted together in Slumdog Millionaire. Their relationship lasted a while, but sadly they are no longer together.

Way back in the day, way before they acted side by (sort of) side in Guardians of the Galaxy, Bradley Cooper and Zoe Saldana dated. They met on the set of The Words in 2011.

They acted together in True Blood, and you just can't star in a sexy, southern vampire drama without falling in love. I think that's the law.

The Amazing Spider-Man brought these two together, and while the relationship didn't last, it was adorable while it did. Share this with a celeb trivia buff in your life!