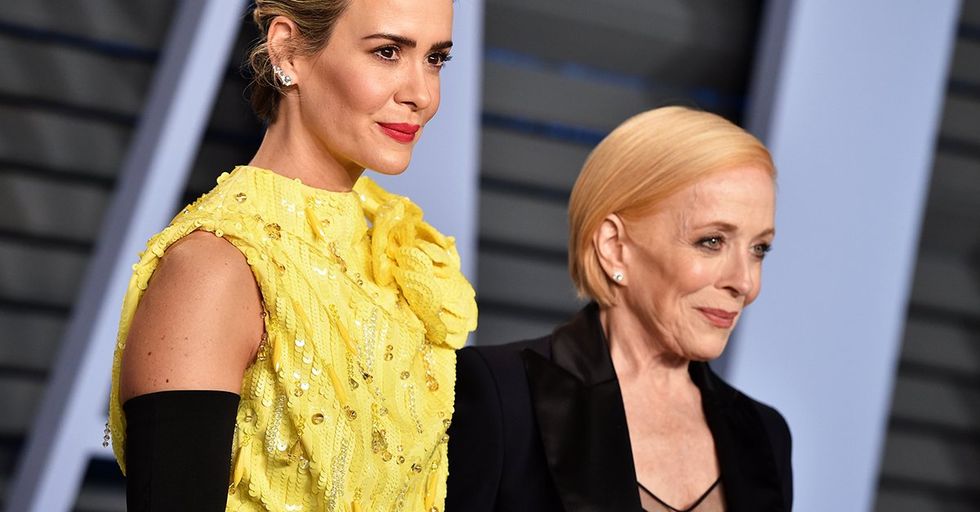 These May-December Celeb Couples Prove Age Is Just a Number

When it comes to relationships, some couples tend to dwell on the things they have in common. Most of the time, both parties in a relationship are of a similar age.

But that's not always the case!

These Hollywood couples prove that age really is just a number. We could all probably learn a thing or two from these successful May-December relationships.

Age Gap: 22 years Ford and Flockhart began dating after they met at the 2002 Golden Globes. They got engaged on Valentine's day in 2009 and got married in 2010.

Age Gap: 32 years These two have been in a relationship since early 2015. They first met about 10 years earlier at a dinner party, where Paulson considered Taylor to be "probably the most exquisitely beautiful woman I’d ever seen." Paulson also has this to say about being in a relationship with an older woman: “I think there’s a greater appreciation of time and what you have together and what’s important, and it can make the little things seem very small. It puts a kind of sharp light mixed with a sort of diffused light on something. I can’t say it any other way than there’s a poignancy to it, and a heightened sense of time and the value of time."

Age Gap: 13 years Jackman and Lee-Furness have been married for more than 22 years! Their wedding took place in Australia back in 1996. Jackman personally designed Lee-Furness' engagement ring — isn't that adorable? The couple has adopted two children together.

Age Gap: 19 years After four years of dating, Cross and Tamblyn got engaged in August 2011. In February 2017, they had a daughter: Marlow Alice Cross. This next couple probably shares a lot of laughs together!

Age Gap: 22 years Martin and Stringfield were married in 2007. In 2012, the couple had a daughter together, and Martin became a first-time father at the age of 67. "You have all the time in the world," Martin said of the experience. "You’re all set and secure in life, and you’re not building your career, so you have a lot of time."

Age Gap: 26 years These two have been married since June 30, 2012. They have four children together: Carmen, Rafael, Leonardo, and Romeo.

Age Gap: 17 years In May 2018, Klum made her relationship with the Tokio Hotel guitarist public. She's said this about the attention they get for being different ages: "My boyfriend is many years younger than me, and lots of people are questioning that and asking about it," she said. "That's really the only time when age seems to be shoved in my face, and I have to give an answer for it. I don't really think about it that much otherwise."

Age Gap: 30 years Goldblum and Livingston became engaged in mid-2014 and were then married in November of the same year. They have two sons together: Charlie Ocean and River Joe.

Age Gap: 23 years Solange and Alan got married in 2014 after a long-term relationship — they had been dating since 2008! Furguson is credited as co-director for both the "Cranes in the Sky" and "Don't Touch My Hair" music videos from Solange's 2016 album. This next couple has more than three decades separating their ages!

Age Gap: 34 years Fun fact: the American Idol alum is 34 years old. Meaning her fiancé is currently twice her age. Seems to be working for them, though! They got engaged in June 2018.

Age Gap: 11 years Lively and Reynolds first met in early 2010 while filming Green Lantern (they were co-stars). They got married in 2012 and have two daughters: James and Inez.

Age Gap: 13 Years Alves and McConaughey met in 2006, then got married in 2012. Together, they have three children: Levi, Livingston, and Vida.

Age Gap: 17 years Olsen and Sarkozy (the half-brother of former French President Nicolas Sarkozy) began dating in 2012. They were married in 2015 at a private residence in New York City.

Age Gap: 13 years Bomer married Halls in 2011, but their marriage was kept a secret from the media until 2014. About their marriage ceremony, Bomer said: "It was very chill and very small – just our closest and dear ones. There is a security, a validity. It's just a feeling. I think - something about saying vows in front of the people around you who love and support you. I think it was good for our family." The couple has three children together (including a set of twins!). This next couple is still going strong after 26 years.

Age Gap: 21 years Beatty and Bening have been married since 1992. They have four children together: two daughters and two sons.

Age Gap: 13 years The couple first met on the set of Hope & Faith in 2004, when Fox was 18 years old (Green was 30). They didn't get married until 2010. Since then, the couple has gone through some ups and downs, briefly separating for a few months between 2015 and 2016, but are currently together with three young sons.

Age Gap: 15 years These two have been in a relationship since 2004. They were married in 2010 in a private ceremony in their home, witnessed by their mothers and 17 other guests. They have adopted several rescue pets together.

Age Gap: 23 years In 2009, Heming and Willis got married in Turks and Caicos. Their ceremony wasn't legally binding, so they had a civil ceremony in Beverly Hills six days later. They have two daughters together.

Age Gap: 17 years We don't need to tell you how amazing this power couple is. They've been married since 2014 (the man who performed their ceremony was a former mayor of Rome!). Together, they have twins Ella and Alexander, as well as a Bassett hound named Millie and a cocker spaniel named Louie. This next couple met when she was 19 and he was 42!

Age Gap: 23 Years Flavin was only 19 years old when she started dating Stallone, who was 42 years old at the time. However, the two didn't get married for another nine years. They have three daughters: Sophia Rose, Sistine Rose, and Scarlet Rose.

Age Gap: 25 years Zeta-Jones and Douglas met in 1998 after being introduced by Danny DeVito. They got engaged on New Year's Eve in 1999 and were married in November 2000. While they separated briefly in 2013, they reconciled in 2014 and Douglas says they've been "stronger than ever" ever since.

Age Gap: 16 years Not much is known about this relationship — they just made it public at the 2018 Met Gala. What we do know is that there's an age gap of more than a decade.

Age Gap: 31 years The Rolling Stones guitarist married Humphreys back in 2012. They have twin girls Gracie Jane and Alice Rose, who were born just a couple days before Wood's 69th birthday. The man in this next couple is five years older...than his father-in-law.

Age Gap: 39 years These two were married in 2013 after meeting while Stewart was performing Macbeth at the Brooklyn Academy of Music. Sir Ian McKellen performed their wedding ceremony. Ozell is, therefore, the stepmother to Stewart's two children, even though she is younger than both of them.

Age Gap: 23 years The two began a relationship after meeting on the set of Nowhere Boy (which Sam directed). He was 18; she was 42. They were engaged in 2009 and married in 2012. Together, they have two daughters. Share this with someone you know who's in their own May-December relationship!