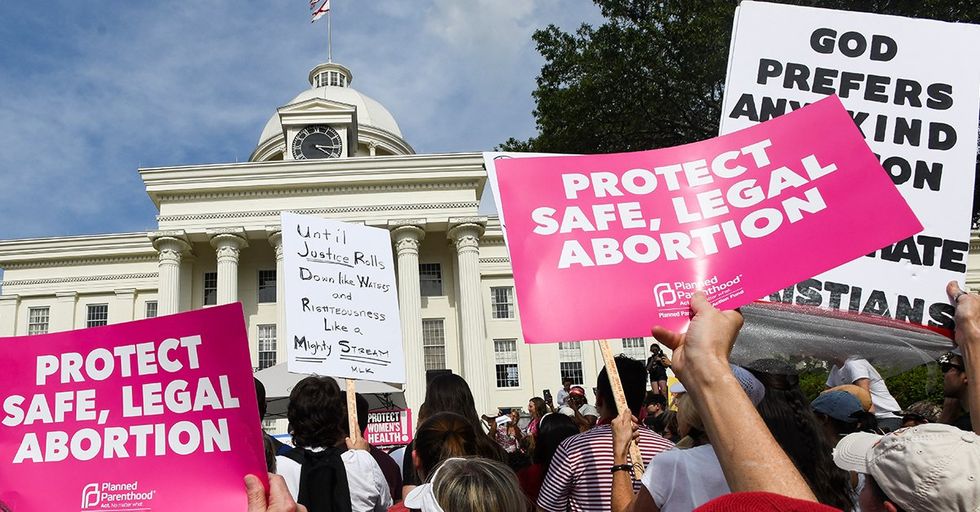 New legislation in Alabama has quickly shaken the entire nation to its core. You've probably heard that Alabama passed the most restrictive anti-abortion law in recent history. This law, approved by the House, Senate, and Governor, makes all abortion illegal with an exception only when the mother's life is at risk. And that is terrifying for women everywhere. It's also a direct challenge to Roe v. Wade, a supreme court decision meant to protect Americans from legislation like this.

Worse still, other states such as Georgia, Ohio, and Missouri, are beginning to follow suit. So many thousands of people are sharing their stories in defense of a woman's right to choose. Some of those people happen to have a little more influence than the average joe.

You absolutely have to see these gripping true stories from celebrities about why they find Alabama's abortion ban to be so utterly inhumane.

Alabama's recent lawmaking move has the nation in an uproar.

When it says the only exception for abortions would be if the woman's life was in danger, or if the fetus can't survive, they mean it. Cases of rape or incest? Nope. As far as Alabama is concerned, that's not a good enough reason. The pregnant person would still be forced to carry that fetus to term.

The law hasn't gone into effect yet.

In fact, Alabama governor Kay Ivey admitted that the new law was probably “unenforceable" due to Roe v. Wade, which set a precedent for abortion rights in America. But the bill mostly designed to get the Supreme Court's attention--and maybe even change the original 1973 decision.

Governor Ivey admitted as much.

“The sponsors of this bill believe that it is time, once again, for the U.S. Supreme Court to revisit this important matter, and they believe this act may bring about the best opportunity for this to occur," Ivey said.

That isn't sitting well with people.

So the outraged and worried masses have taken to social media with their own personal reasons to oppose Alabama's actions. Here are a few choice picks from celebrities who are heavily invested in this fight!

#YouKnowMe is full of stories about why the right to an abortion is so important. Plus, Philipps wrote this on her Instagram: Yesterday, the governor of Georgia signed a bill effectively banning abortion in that state. Georgia is the 6th state to pass such a bill and there are 11 states where similar legislation is pending. I get why people feel strongly about abortion(I really do--read my book), BUT I also know that women and their doctors are in the best position to make informed decisions about what is best for them. Nobody else. I spoke about my abortion last night on my show because I won't be silent while women's rights are stripped away. -busyphilipps

Here's where that hashtag started:

Sure enough, thousands began doing just that: sharing their truths.

Alabama @GovernorKayIvey signed the most extreme abortion ban since Roe v Wade. This isn’t a coincidence — it’s part of an attempt to ban abortion outright. And it isn’t just an attack on Alabama women, this is an attack on everyone who might or can get pregnant. · 25 white, male legislators in Alabama voted to take away women’s health and rights. This bill - could jail doctors for life just for providing care - would put women’s lives in jeopardy - makes NO EXCEPTIONS for rape or incest -pink

She posted more than once, actually.

It's not every day we see so many people speaking from their hearts and souls like this.

Reese Witherspoon has some thoughts.

Nevertheless, the question remains: it's unconstitutional, but will that be upheld if it goes to the Supreme Court?

Ellen knows where she stands.

I stand with the women in Alabama, Georgia, Kentucky, Mississippi, Ohio, Missouri, and everywhere, who have the rig… https://t.co/dV10kyjoaG
— Ellen DeGeneres (@Ellen DeGeneres)1558028933.0

Hopefully, many other people continue to stand as well.

Male celebrities can be allies, too.

I don’t usually comment on politics but this one got me and is so important. This whole abortion law thing in America is a mess I mean you're completely taking away the rights of women and the ownership of the bodies that belong to them. I have so much respect for women Watching someone go through pregnancy and how tough it can be at times and us as men never have to go through that so how can we even comment or decide what women should or shouldn’t go through, it is total BS that anyone is even given that power. -

Liam Payne had a lot to say.

It’s bad enough that women have to go through cycles of periods that can be painful without making some of them have to go through with unwanted pregnancies that will literally change the course of the lives they lead at all ages. Here was me thinking it was supposed to be the land of the free it all looks very tied up from where I’m standing. Abortion up to a certain point should always be legal it’s only right that woman are given that choice to make for themselves. -

Many celebrities were posting that compilation of the politicians responsible for Alabama's new law.

Rihanna shared the same photo too, and this message:
Take a look. these are the idiots making decisions for WOMEN in America.
Governor Kay Ivey...SHAME ON YOU!!!! -badgalriri

Alexa Chung did the same.

And as her Instagram caption clearly states, she was Very Angry when she did!

Courteney Cox, who is from Alabama, was especially upset.

I love Alabama and I am proud to call it my home. But today I am appalled and scared. We CANNOT go backward! Please help fight this ban by donating to @yellowfund! -courteneycoxofficial

So we've split it into a few slides for ease of reading. Here it goes: Last week, a bill was signed into law in Georgia that is a near-total ban on abortion. This marks the fourth “heartbeat" law to be passed in the United States in the last year - a name that is designed to be emotive. It refers to the first signs of the development of a heart in a fetus at 6 weeks of pregnancy, long before most people know they are pregnant. -emmawatson

Here's her words on why the situation in Georgia is of particular note.

Georgia’s bill stands out for going one step further in including personhood language, criminalizing not just abortion providers, but also pregnant people for having abortions or even miscarrying. Today, Alabama passed its own law banning abortion except when the health of the mother is at risk. We remember that Savita Halappanavar died in Ireland with the same law on the books. -emmawatson

She brought an international perspective to this.

Currently, women & pregnant people living in Northern Ireland are forced to travel to mainland Britain for abortion care that is illegal in their home country. There will always be people who cannot travel because of domestic violence, immigration status, and disability. People living in Northern Ireland and the USA deserve the dignity of accessing safe, legal & local reproductive healthcare at home. -emmawatson

And she delivered this big reality check:

These laws won't stop women and pregnant people from having abortions, or from making the best decision for their bodies and families, it will just mean they are forced to do so unsafely and with stigma.  Please join me in supporting @plannedparenthood @womenhelporg@all4choice -emmawatson Go off, Emma Watson!

Minka Kelly had another long post--and a very personal story.

When I was younger I had an abortion. It was the smartest decision I could’ve made, not only for myself & my boyfriend at the time but also for this unborn fetus. For a baby to’ve been born to two people — too young and completely ill-equipped — with no means or help from family, would have resulted in a child born into an unnecessary world of struggle. -minkakelly

She explained why, in her experience, abortion had been best for everyone involved.

Having a baby at that time would have only perpetuated the cycle of poverty, chaos, and dysfunction I was born into. Forcing a child to be born to a mother who isn’t ready, isn’t financially stable, was raped, a victim of incest (!!), isn’t doing that theoretical child any favors. -minkakelly

She brings another important perspective to the table.

For those of you insisting abortion is murder, and to Rep. Terri Collins who said “an unborn baby is a person who deserves love and attention" — forget bringing up the mother might be in need of some “love and attention." What do you think happens to these kids who end up bouncing around in foster care, live on government assistance because the mother has no help, can’t afford childcare while she works a minimum wage job, and is trapped in a cycle of trying to survive on the meager government assistance so many of you same pro-lifers are determined to also take away. -minkakelly

She also posed some questions to the pro-life crowd:

If you insist on forcing women to carry to term, why do you refuse to talk about comprehensive sex-ed, the maternal mortality rate, free daycare, paid maternity leave? Our lives, traumas & family planning is for no one to decide but us. Certainly not a group of old white men. -minkakelly

And she reminded men why being an ally was important.

Speaking of men... With all this punishment for women, I wonder where all the punishment is for the men in this scenario. By looking at the photo of all the men who are making this mess, I find it hard to believe that if it were the autonomy of a man's body, health, and life in question, I can't help but be certain we wouldn’t be having this conversation in the first place. I appreciate seeing men speak up on this issue - women do not get pregnant alone. Lest we forget, outlawing abortion has never stopped women from attempting it. -minkakelly

Because her picture included positively sickening quotes from actual politicians in a place of power. Breslin wrote: I am so sorry for those in Alabama who are suffering the consequences of this extreme, unfair, cruel and unjust law. I am beside myself. These quotes feel criminal. -abbienormal9

Cara Delevingne got right to the point.

Jaime King had words of warning.

Alabama @GovernorKayIvey signed the most extreme abortion ban since Roe v Wade. This isn’t a coincidence — it’s part of an attempt to ban abortion outright. And it isn’t just an attack on Alabama women, this is an attack on everyone who might or can get pregnant. -jaime_king

The legal repercussions of this law could be very grave.

25 white, male legislators in Alabama voted to take away women’s health and rights. This bill: - could jail doctors for life just for providing care - would put women’s lives in jeopardy - makes NO EXCEPTIONS for rape or incest -In Alabama, Black women are dying from cervical cancer at 2x the rate of white women, and from pregnancy & childbirth more than 4x as often. In the face of public health crises that are killing women, politicians are eroding health care access & jailing doctors. -We are dangerously close to a post-Roe world. It’s clear that anti-abortion politicians will say and do anything, including lie about abortion and pass extreme abortion bans, to put this crucial health care out of reach for millions of people nationwide. -We have to fight back against each and every attempt to criminalize people for simply accessing abortion care and exercising their constitutional right to abortion. Politicians don’t belong anywhere near the exam room. -jaime_king Keep on sharing this story, and all those of the people bravely speaking up over social media!