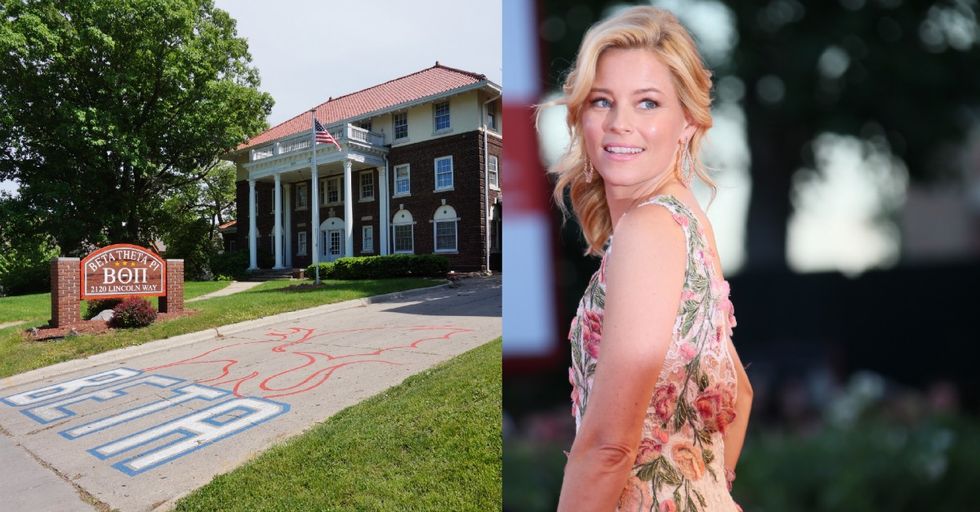 All the Celebrities You Never Knew Were in Sororities and Fraternities

Ah, college. Some people look back on it as the best years of their life, while others recall it being a time filled with stress-induced nausea, hours and hours of studying and sleeping in the library in an effort to avoid your weird, passive-aggressive roommate. (Wait, was that just me?) It's important to find a support system early on so you're not left floundering on your own. This is why many people choose Greek life and join a fraternity or sorority. This not only gives you something extracurricular to put on your resume but also helps you to make life-long friends that you'll cherish for years to come. The following celebrities were all at one time pledges in a sorority or fraternity. Keep scrolling to see if you have a famous brother or sister you never knew about!

About to start college and completely terrified? Here's some advice to help you make the most of your freshman year!

This dancer and actress was a member of Pi Beta Phi while she attended the University of Southern California.

Everyone's favorite non-aging funny guy was a total frat guy in college. He was a member of the Sigma Nu fraternity when he was a student at the University of Kansas. And yes, he probably looked exactly the same as he does now.

Seinfeld and Veep comedy icon Julia Louis-Dreyfus lived the greek life as a member of the Delta Gamma sorority while attending Northwestern University.

You might not immediately think of "frat guy" when you hear the name Jim Gaffigan, but you can't always judge a book by its cover. He was a member of Phi Gamma Delta at Purdue University.

That's right! Your favorite sitcom Dad (and lovable monster) was a total frat bro! Goodman belonged to Sigma Phi Epsilon when he was studying at Missouri State University.

When you think of Mariska Hargitay, you immediately think of that bum bum that happens at the beginning of every Law and Order: SVU episode. But did you know she was also a Kappa Kappa Gamma sister at UCLA?

McConaughey was a member of the Delta Tau Delta fraternity while studying at the University of Texas at Austin. Alright, alright, alright.

It's not hard to imagine Jennifer Garner as a member of the Pi Beta Phi sorority while she attended Denison University in Ohio.

The famous director of classics like Jaws, Jurrasic Park, and Schindler's List was one a member of the Theta Chi fraternity at California State University Long Beach.

The host of Family Feud is no stranger to fraternities: He was a member of Omega Psi Phi while at Kent State University.

Before winning the title of 1984's Miss America, Williams was a college student and sorority sister in Zeta Phi Beta at Syracuse.

Before Anchorman made him a household name, Ferrell was a member of the Delta Tau Delta fraternity at the University of Southern California. Knights of Columbus!

Who wouldn't want to be sorority sisters with Wanda Sykes?! She's was a member of Delta Sigma Theta at Hampton University and is still an active member to this day.

Wanna be like Mike? Then rush a fraternity! Jordan was a part of the Omega Psi Phi frat while studying at the University of North Carolina at Chapel Hill.

This Friday Night Lights alum was a member of the Sigma Kappa sorority during her time at Dartmouth College.

"Whatever happened to Zach Braff?" You may be asking yourself. Who knows what he's up to now, but back in college is was a member of Phi Kappa Psi at Northwestern University.

Bush was a serious sister during her time at the University of Southern California. Not only was she a member of  Kappa Kappa Gamma, but she also served as the social chair.

You might know Marsden from Enchanted and Hairspray, but back in college his frat buddies knew him as a fellow member of Delta Tau Delta at Oklahoma State University–Stillwater.

It's pretty fitting that Jamie Chung starred in the movie Sorority Row since she was a member of Kappa Kappa Gamma while attending UC Riverside. So that's why her performance seemed so authentic!

You may recognize him as Agent Matthews in Miss Congeniality, but before he was helping Sandra Bullock with the talent portion of the pageant (remember S.I.N.G.?) he was in the Lambda Chi Alpha fraternity at the University of California, Santa Barbara.

The oldest Kardashian sister at one point attended the University of Arizona and was a sorority pledge with Alpha Phi. Turns out she has even more sisters than we thought!

Indiana Jones in a frat? Strange, but true! Ford was a member of Sigma Nu at Ripon College.

Before she kicked butt in Charlie's Angels and Kill Bill, Lui was a member of the Chi Omega at the University of Michigan.

Conan O'Brien's sidekick was once a member of Sigma Phi Epsilon while he studied film at the University of Illinois.

Not only is this girl on fire, but she's also a former sorority girl! Keys became an honorary member of Alpha Kappa Kappa in 2004.

The members of Omega Psi Phi were treated to their own private Shaq Attack back when he was a student at Louisiana State University.

Raise your hand if you'd love to be Elizabeth Banks' sorority sis! This talented actress, director, writer, and producer was a member of Delta Delta Delta while at the University of Pennsylvania.

If you've ever been a member of Sigma Chi, you're in good company: Woody Harrelson joined this frat while attending Hanover College in Indiana.