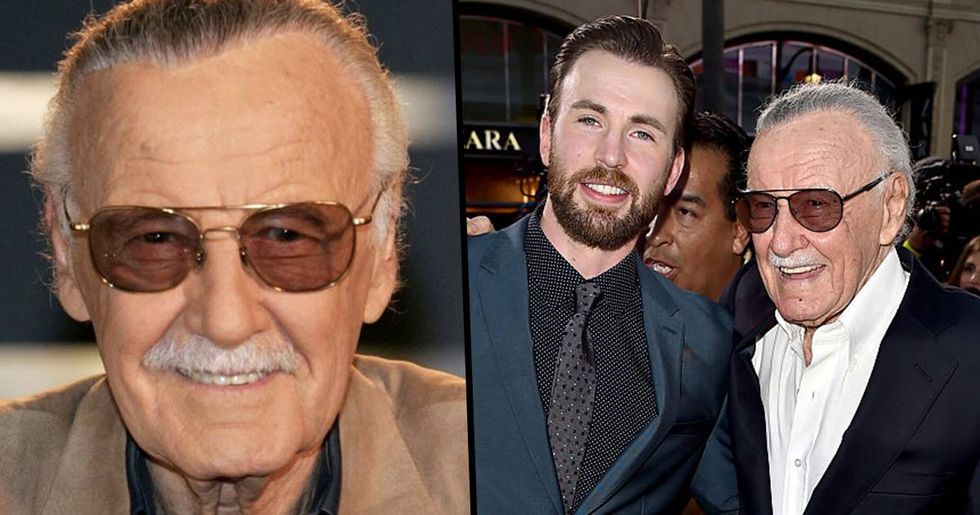 Yesterday, it was reported that the Marvel Comics luminary had died at the age of 95 after he was rushed to Cedars-Sinai Medical Center in Los Angeles.

Both Marvel axtors and fans are mourning to the death of Stan Lee, who, together with Jack Kirby, launched Marvel back in 1961.

The feisty writer, editor and publisher was responsible for such iconic characters as Spider-Man, the X-Men, Thor, Iron Man, Black Panther and the Fantastic Four — 'nuff said.

Chris and Stan were known to have a strong, mutual respect and have previously spoken of their affection and admiration for each other.

Stan Lee's cameos will be missed.

Ryan Reynolds plays Deadpool, a creation of the Marvel universe. Stan Lee makes a cameo in that too!

One of Hugh Jackman's most defining roles is that of Wolverine in X-Men, a Marvel creation.

Mark Ruffalo  plays The Hulk in The Avenger's franchise, taking over the role from Edward Norton who played him in "The Incredible Hulk".

Anthony Mackie played 'Falcon' in the movie Avengers - Infinity War. He shared this snap of the two of them together.

Did you know...Captain America was his first big break.

A week into his job at Timely Comics, Lee got the opportunity to write a two-page Captain America comic. He wrote it under the pen name Stan Lee (which became his legal name) and titled it "Captain America Foils the Traitor’s Revenge." His first full comic script would come in Captain America Issue 5, published August 1, 1941.

Robert Downey Jr plays Tony Stark in Iron Man, also appearing in The Avengers. We first saw him play the role of Iron Man in 2008!

Chris Hemsworth shared this picture of Stan Lee on his Instagram.

The controller of Stan Lee's official Instagram account posted this tribute to him. He said about his catch phrase "Excelsior!" : ‘I used to have a lot of expressions that I would end my comic book columns with: “Hang Loose", “Face Front", “‘Nuff Said", and I found that the competition was always imitating them and using them. ‘So, I said I’m going to get one expression that they’re not going to know what it means, and they won’t know how to spell it. ‘And that’s where “Excelsior" came from, and they never did take up on it, thank goodness.’

This picture of all of Stan Lee's character creations lining up to attend his funeral is sure to bring a tear to your eye.

Spider-Man was Stan Lee's favorite superhero that he created. Spider-Man has been depicted on screen by Toby Maguire, Andrew Garfield and most recently Tom Holland.

It was an issue at the printers which turned The Hulk green...The character was supposed to be gray, but according to Lee, the printer had a hard time keeping the color consistent. “So as of issue #2," Lee wrote, “with no explanation, he turned green."

His wife destroyed his prize typewriter.

According to Lee, during an argument, Joanie destroyed the typewriter he used to write the first issues for characters including Spider-Man and The Fantastic Four. “This happened before eBay," he wrote. "Too bad. I could’ve auctioned the parts and made a mint."

A fire destroyed his interviews and lectures...

When Lee moved his family to Los Angeles, he set up a studio in Van Nuys where he stored videotapes of his talks and interviews, along with a commissioned bust of his wife. The building was lost to a blaze that the fire department believed was arson, but no one was ever charged with the crime.

His favorite Marvel cameo was based on one from the comics.

At the beginning with the first Spider-Man film in 2002, Stan Lee has made quick cameos in Marvel films as a service to the fans. He said that his appearance in Fantastic Four: Rise of the Silver Surfer (2007) was inspired by the story of Reed and Sue Richards’ wedding in Fantastic Four Annual Volume 1 #3, in which he and artist/writer Jack Kirby attempt to crash the ceremony but are thwarted.

He even did a cameo in The Simpsons

The writers of the show have since confirmed that he was a super guest to have on the show.

His films offer us some valuable life advice.

Stan Lee's career has spanned so many years that in many ways, we've grown up with him. The first Spider-Man was released in 2002!

Before writing about the fantastic lives of fictional characters, Lee wrote antemortem obituaries for celebrities at an undisclosed news office in New York. He said that he eventually quit that job because it was too “depressing."

His wife was also his barber

As a bit of a throwaway fact, Stanley Martin Lieber (Stan Lee) revealed the secret of his slicked back mane on the second page of his memoir. “My whole adult life, I’ve never been to a barber," he wrote. “Joanie always cuts my hair."

In 2008, President George W. Bush presented Stan with the American National Medal of the Arts. Stan is the only comic book writer to ever receive the honor.

Stan's official US Army title during WW2 was "Playwright".

Greatest of All Time

Stan Lee’s Fantastic Four with Jack Kirby is considered the greatest and most influential superhero comic of all time.

Since 2000’s X-Men, Lee has appeared in 16 films based on Marvel Comics characters that he either created or helped create during his time with Marvel.

Stan is the recipient of the 2,428th star on the Hollywood Walk of Fame. It is located at 7072 Hollywood Blvd, in front of the Live Nation Building.