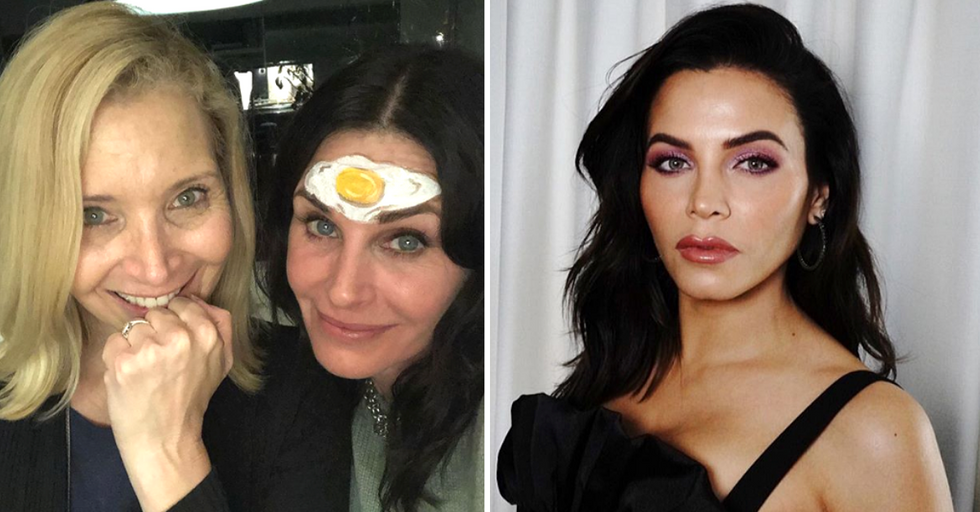 Celebrities You'll Be Surprised to Discover are Brilliant

When people think of Hollywood, they think of a vain and vapid place. Shallowness is constantly being linked with the concept of celebrity. But plenty of the people involved aren't vapid or shallow at all! In fact, some celebrities are actually brilliant.

You'll definitely be surprised to discover which of your favorite celebrities are actually insanely smart. Some have crazy-impressive college degrees, while others speak upwards of five different languages. Heck, some of them even have passion projects on the side of their famous careers that'll blow you away!

It just goes to show that everyone out there is probably way deeper than we give them credit for. Be careful before you judge a book by its cover. You never know what you'll find when you crack it open. So check out these celebrities who are really brilliant!

You've seen Mayim Bialik playing neuroscientist Amy Farrah Fowler on The Big Bang Theory, but it's not all acting: Bialik is really a neuroscientist. She earned her Ph.D. from UCLA in 2007, with a dissertation entitled: "Hypothalamic regulation in relation to maladaptive, obsessive-compulsive, affiliative and satiety behaviors in Prader–Willi syndrome."

Lisa Kudrow, who everyone remembers from Friends (among a ton of other acting roles) has also published a psychology paper about left-handedness and headaches!

Kristen Stewart has been seriously coming into her own in the past few years, both as an actress and public personality; unsurprisingly, she's also really brilliant and has co-written and published a paper through Cornell University on Neural Style Transfer.

Sure, Shaq is an NBA Hall of Famer. He's also got a Doctorate in Leadership and Education from Barry University (not to mention his Master's degree from the University of Phoenix). Shaq's doctoral dissertation? "The Duality of Humor and Aggression in Leadership Styles." He'd definitely know about that!

Ken Jeong is a hilarious actor and comedian whom you've probably seen in The Hangover and Community, but he's also a doctor--and he regularly renews his medical license!

Steve Martin is an actor, comedian, legendary banjo-player (no, really, he goes on tour as a musician!) and he's also a member of MENSA. You can actually read about it in his article for the New Yorker!

Gerard Butler knows a thing or two about the law; not only did he graduate from the University of Glasgow School of Law, but he also served as the president of his university law society.

Here's another (much younger) member of MENSA! Nolan Gould also joined the organization, which shouldn't be surprising--the Modern Family actor graduated high school at the age of 13.

When thinking of Queen, most people just think of its former lead singer, Freddie Mercury--but maybe you'll also recognize its lead guitarist, Brian May! Sure, he's the one absolutely shredding it on guitar in "We Will Rock You" and "Flash," but he's also got a doctorate in astrophysics!

Ashton Kutcher is known for his acting, but he's also got an academic past; Kutcher studied biochemical engineering at the University of Iowa!

Graffin is the singer from the legendary So-Cal band Bad Religion, but that's not the only thing he did with his life. Graffin also has a Ph.D. in Zoology from Cornell University!

James Franco definitely has a quirky reputation in the world of Hollywood, but he's made a name in other circles too. Franco has attended not one, but two prestigious universities in his academic life, first earning a Master of Fine Arts in Writing from Columbia University. As of 2010, he was also in the process of earning a Ph.D. in English from Yale University.

This debonaire British actor has exploded in popularity over the course of the 2010s, and he's got quite a sharp mind. Did you know that Hiddleston can speak four different languages? Those would be English, Spanish, French, and Greek.

Clearly, institutions of higher learning are starting to recognize Questlove's undeniable talents. The legendary Roots frontman has also been an adjunct instructor at New York University!

And here we have another distinguished Harvard graduate! Ashley Judd got her Master's degree in Public Administration from the university--no easy feat, to be sure.

Natalie Portman can also speak six languages, not to mention that around the same time she was filming Star Wars, she was also completing a degree at Harvard University! This brilliant leading lady can speak English, Hebrew, German, Japanese, French, and Spanish.

Jodie Foster was gifted in life right from the get-go; she learned to read at age three! She has both a degree and honorary doctorate from Yale University, which she attended even after becoming successful in the world of acting, and she also speaks five languages! (English, German, Italian, French, and Spanish, to be specific.)

We all know David Duchovny from his long-term role on The X-Files, but he's also thoroughly educated! Duchovny got his undergrad degree in English from none other than Princeton University and went on to get his master's from Yale. Wow!

Viggo Mortensen has a double-degree in Spanish Studies and Politics from St. Lawrence University, and he speaks a whopping seven languages! This accomplished actor speaks English, French, Danish, Italian, Norwegian, Arabic, and Catalan.

If the name Rowan Atkinson doesn't sound familiar, how about his world-renowned comedy character Mr. Bean? That probably rings a few more bells! Despite his reputation today as one of the world's greatest comedians, Atkinson has a few other skills up his sleeve; he has a Master’s in Electrical Engineering from Queen’s College, Oxford!

This beloved songstress showed off her brilliance from a young age. Not only did Alicia Keys graduate from high school at the young age of sixteen, but she was the school valedictorian then, too!

There's a trend among comedians: a lot of them are quite brilliant! Take another British legend, Graham Chapman, for instance: he's known for being a member of Monty Python, but Chapman also earned the right to practice medicine. He had an M.D. from St. Bartholomew’s Medical College!

Kal Penn's career is insanely dynamic! He's known as an actor for roles in House and Harold & Kumar, but did you know he was also a member of the Obama Administration? Yep, Penn served as the Associate Director in the White House Office of Public Engagement from 2009 to 2011! He's also taught courses at the University of Pennsylvania.

Between the world-famous folk duo Simon & Garfunkel, Art Garfunkel definitely had the academics nailed down! Garfunkel isn't just a famous musician; he's also a graduate of Columbia University with a master's in mathematics!

Karlie Kloss first made her name as a supermodel, but she kept busy between jobs. Kloss went and taught herself to code in her spare time, and after resigning from being a Victoria's Secret Angel, she attended NYU and founded the "Kode With Klossy" camp to teach young girls about fields in STEM!

It's no wonder that Lupita Nyong’o shot into fame so quickly; she was cast in 12 Years a Slave immediately after graduating with a master's degree from Yale's School of Drama! Now she's an A-list actress and Broadway star as well, but she spends plenty of her time fighting for wildlife rights in Kenya.

Dolph Lundgren definitely made his name playing big, kinda boneheaded antagonists in movies, but the real guy is anything but! Lundgren actually has a master's degree in chemical engineering from the University of Sydney.

Here's yet another debonaire British actor with the brains to back his reputation up! Benedict Cumberbatch became a worldwide heartthrob during his time in Sherlock, and he's also got a master of arts degree from the London Academy of Music and Dramatic Art.

You've gotta love Sigourney Weaver's long, legendary career of playing totally awesome females in sci-fi cinema, from Alien in 1979 to Avatar in 2009. In addition to all that, she's got a master's degree in Fine Arts from Yale University!

Angela Bassett is another formidable actress and Yale graduate; she not only earned her bachelor's degree there in African-America studies, but she also got her master of fine arts in the Yale School of Drama! Now that's a talented lady.

And finally, we've got the famous and dearly departed Mr. Spock. Leonard Nimoy went into the history books playing the character of Spock in Star Trek, but the academic titles he built up over the course of his life are plenty impressive too! Nimoy has a master's in Education from Antioch College, plus an honorary doctorate for activism in Holocaust remembrance, the arts, and the environment. What an amazing guy! Did any of these brilliant celebrities surprise you? Share this list with your friends and see what surprises them too!