These Celebs Lead Sober Lives, and a Few of Them Might Surprise You | 22 Words 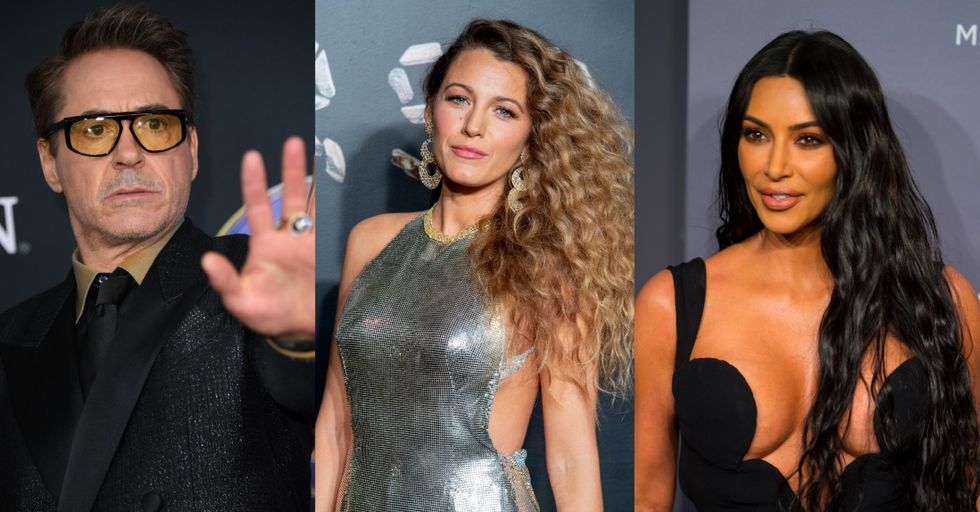 These Celebs Lead Sober Lives, and a Few of Them Might Surprise You

When we think about the private lives of celebrities, images of wild parties with flowing bottles of champagne on luxury yachts tend to come to mind. But you might be surprised to find out that many members of the Hollywood elite would choose seltzer water over a glass of Dom Perignon, and live entirely sober lifestyles instead of the crazy alcohol-fueled lives you've always pictured. Seriously, if you had the dough to blow on a $20,000 bottle of wine, you'd do it, wouldn't you?

Whether it be because of substance abuse problems, simply trying to live a healthier life by cutting it out, or just not having the stomach for it, the following celebrities choose to live a life that's completely free from alcohol. Some of these may surprise you. I, personally, was blown away by #30. This is the same guy who released his own line of signature vodkas, right?

Although British comedian Russell Brand has struggled with addiction for years, he's been completely clean and sober since 2002. He recently wrote a book titled Recovery: Freedom from our Addictions, which aims to help others who struggle with similar demons.

After realizing she had a drinking problem, Pinkett Smith gave up drinking alcohol cold turkey in the early '90s and hasn't looked back since. Go, Jada!

Elton John has been very outspoken about his hardcore party days and has spoken openly about his addiction to drugs, alcohol, and battles with eating disorders. The iconic singer has been completely sober since 1990.

The daughter of famous parents Bruce Willis and Demi Moore, Rumer announced her decision to become sober on her Instagram account. "Yesterday I celebrated 6 Months of Sobriety," she said in the post. "It’s not something I planned on but after the long journey of getting here I can honestly say I have never been more proud of myself in my entire life."

Jacobs revealed in an interview on Jimmy Kimmel Live! that she's never had a drink in her life, and had to research what hangovers are like in order to properly portray one on TV. If only!

Although Portman has dabbled in drugs and alcohol during her college days in Harvard, she's given it up completely since graduating. And yes, Nat, we're all super impressed that you went to Harvard.

Lovato has been very open and honest about her struggles with addiction and mental health issues in order to reduce the stigma surrounding them. She's been sober since 2012, with a few relapses in between. On March 2018, she posted on Twitter, “Just officially turned 6 years sober. So grateful for another year of joy, health, and happiness. It IS possible. ??"

Shepard posted about how long he's come during his sober journey on his Twitter account: “I now have a wife & babies & some self-esteem #gratitude #promises."

“I feel like I’ve been very lucky because I don’t really have an addictive personality," Banks said in a personal email she wrote to her fans. "I’ve never had any drugs, and I had a little taste of alcohol when I was 12 years old, but that’s about it."

After entering rehab for a drug and alcohol addiction in 2013, Efron has been clean and sober since completing treatment. "What I found is structure," he said in an interview with Elle about how being sober changed his life. "That led me to a balance of opposites: You get out of life what you put in."

The former Sex in the City star was quoted in The Fix about her path to sobriety. “I’m a recovering alcoholic," she said. "Sure, sometimes I miss it. Every once in a while, I’ll be with friends and they’ll be drinking red wine and I’ll think, in a really innocent way, 'Oh wow, that’s such a wonderful glass of red wine. Wouldn’t it be fun to drink it?' Maybe it would be fine, but it’s really not worth the risk."

In an interview with GQ, the 7-time Oscar nominee discussed his difficult path from addiction to recovery and how his alcoholism affected his work. "If I continued it, I was really going to sabotage my whole life," he said. "The one thing that I've learned in life is the best thing I can do is embrace who I am and then do that to the fullest extent, and then, whatever happens, happens. The more steps I do to not do that, the farther I am away from fulfilling any potential I would have. So the answer to that question, then, is: Yes, of course it hindered the work."

At one point in his life, Robert Downey Jr. was prone to getting so blackout drunk and hopped up on heroin that he actually broke into a neighbor's house and passed out in their 11-year-old son's bed. After countless arrests and drug charges, the actor has lived a life free from drugs and alcohol since July of 2003.

In an interview with British GQ, the "Born To Die" singer talked about her issues with alcohol as a teen. "It's been nine years since my last drink," she said. "That's really why I got sent to boarding school aged 14 - to get sober. I was a big drinker at the time. I would drink every day. I would drink alone. I thought the whole concept was so f***ing cool."

Ricci went through a rebellious stage in her youth but has since given up alcohol for good. "For the past ten years I've been pretty much not drinking," she said in an interview with BlackBook. "I went through a normal kind of late teens, early 20s drinking, but it was a choice I made, because I didn’t think it was very good for my life."

The star of Pretty Little Liars made two big life decisions at once: To chop off all her hair and to quit drinking. "I'm just always trying to surround myself with better people and be the best version of myself possible," she told Instyle.

Rob Lowe may forevermore remind us of the eternally positive and ridiculously health-conscious Chris Traeger from Parks and Recreation, but in real life, Lowe wasn't always very good to his body. “Everyone at some point has to come to terms with their own relationship with drugs and alcohol," he said during his acceptance speech at the Spirit of Sobriety awards. "I have learned a few things over the years. Whenever I have an opportunity to share that with people, it’s very fulfilling to do it."

Radcliffe, aka Harry Potter, revealed something that HP fans might find pretty shocking: He was drunk while filming the famous film franchise. "I have a very addictive personality. It was a problem," he said in an interview with Heat Magazine.  "I can honestly say I never drank at work on Harry Potter. I went into work still drunk, but I never drank at work. I can point to many scenes where I'm just gone. Dead behind the eyes." He's since given it up completely and has been sober since 2010.

Blake Lively discussed her distaste for alcohol back in her 2012 interview with Allure. "I don't drink. I've never tried a drug," she said. "It's not like I decided on these strict lifestyle choices and I'm enforcing them. It's just something that I genuinely don't have a desire for."

Pitt did something that most people who have issues with alcohol find extremely difficult: He gave it up cold turkey. "Don't want to live that way anymore," he told GQ.

With Eminem's bad boy reputation, it might surprise you to hear that he's been 100% sober for the past 11 years. After admitting to himself that he had a problem with drugs and alcohol, the rapper entered rehab in 2008 and completed the full 12-step program. "11 years - still not afraid," he wrote in a Twitter post on his sober birthday.

It was her equally famous sister Khloe who discussed Kim's choice to stay away from alcohol during an interview with ELLE. "Kimberly does not drink alcohol whatsoever. Pregnant or not, she's just never been into it," she said.

J-Lo's commitment to her beauty routine is pretty extreme since her choice to abstain from drinking alcohol only goes skin-deep. "I think it ruins your skin," she told Instyle. "Of course, during celebratory toasts, everybody's like, 'You can't toast with water!' So I'll toast with alcohol and just take a sip."

You may or may not remember Cook's controversial Facebook post calling on people with drinking problems to seek help. "If you're getting drunk as an adult on weeknights for no reason at all and waking up feeling like shit just admit you're an alcoholic and get working on yourself. Why? You are bringing everyone around you down. You don't see it. Grow up and take responsibility for your actions," he posted in 2014. Cook himself stays away from smoking and drinking entirely.

On July 7, 2017, Kat Von D made an Instagram post celebrating her choice to rid her life of drugs and alcohol. "Today I celebrate 10 years of sobriety. ?", she captioned her pic.

Funnyman Jim Carrey has lived with his fair share of demons, including chronic depression. He decided to live a completely sober life after being prescribed drugs to cope with his mental health issues. "I was on Prozac for a long time. It may have helped me out of a jam for a little bit, but people stay on it forever. I had to get off at a certain point because I realized that, you know, everything's just OK," he told CBS News. "I rarely drink coffee. I'm very serious about no alcohol, no drugs. Life is too beautiful."

Actress Eva Mendes spoke with Interview Magazine about her decision to check herself into rehab in 2008. "I’m proud of people who have the determination and the fearlessness to actually go and face their demons and get better," she said. "This is a life or death situation. Again, I’m not a spokesperson for this, but it’s just that I want to support people for their decisions when they do go in and get help."

Lamar was featured in GQ's 2013 Rapper of the Year profile, and during his interview, he shocked his fans by revealing that he doesn't do drugs and doesn't drink alcohol, despite what some of his lyrics might suggest.

Daughter of rockstar Ozzy Osbourne, Kelly has made a name for herself in the fashion and talk show world. But her struggles with drugs and alcohol came to a head in 2003, when her Mom was battling cancer and her Dad was in a serious ATV crash. “I couldn’t see into tomorrow. I was using anything to make me sleep through the day. My only relationship was with the pizza delivery guy," she said in 2009 an interview with PEOPLE. “It sounds funny in retrospect, but it’s not funny that I hated myself like that." After a brief relapse, she's now been clean and sober since August 9th, 2017.

Although rapper 50 Cent sold drugs as a 12-year-old, he revealed to Piers Morgan during an interview on Piers Tonight that he's never actually taken drugs, claiming that it was "an easy out" to sell them where he grew up. As an adult, he also abstains from alcohol since it gives him a bad reaction and makes him "paranoid."