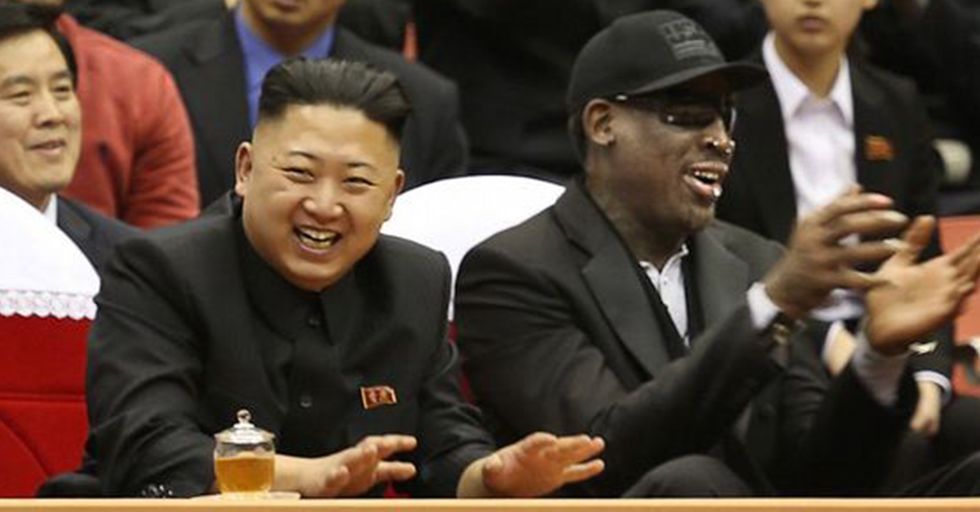 8 Celebrities Who Have Forged Unlikely Friendships With Infamous Dictators

We all know it can be hard to make friends.

Your schedules never match up, one of you wants sushi and the other wants ramen and you can never agree, one of you is a horrifying dictator, you know the drill.

Oh, you weren't on board with the dictator part? Weird.

These celebrities didn't let the fact that their new best bud was a murderous tyrant ruling over an entire nation stop them from having a great time together. No friendship is perfect, after all!

In 2014 Nicki Minaj was invited to perform for the communications company Unitel in Luanda, Angola. A company which unfortunately happened to be controlled by José Eduardo dos Santo, the three-decade long president/dictator of Angola. She was reportedly to be paid two million dollars for the performance.

At first, everyone gave Nicki the benefit of the doubt.

Not everyone is a social studies super star. It's fair to assume that when Nicki accepted the invitation, she didn't know that José Eduardo dos Santos took control of Angola's wealth for himself and his family while the rest of his country lived on $2 a day. So the Human Rights Foundation sent her a letter and explained the whole thing to her. Apparently, she didn't really care. Not only did Nicki go ahead with the trip, she posted about it on social media.

Nicki even posted an Instagram photo of herself draped in the flag of Angola and another with the daughter of José Eduardo dos Santos.

In a cringe-worthy post she described meeting José Eduardo dos Santos' daughter Isabel dos Santos, who she called the 8th richest woman in the world and praised for having "girl power". But Nicki didn't exactly acknowledge that dos Santos, while very rich, got that money from completely screwing over an entire country. She might have girl power but...it's not the kind of power you really want to have.

Dennis Rodman struck up a friendship with one of the world's worst dictators and felt absolutely no shame about it.

We all knew Dennis Rodman was kind of weird. From his crazy hair to his outrageous wardrobe, the basketball player was always known for being a bit eccentric. But things got really weird when he became BFF with none other than North Korean dictator Kim Jong-un.

While there, he struck up a friendship with dictator Kim Jong-un, calling him a "friend for life", a "basketball fan", and a "great dad". He's also a dictator whose been known to have his own family members assassinated, but that didn't seem to matter much to Rodman who said that he deserved the Nobel Peace Prize for forging a friendship with Kim Jong-un in an attempt to bring the USA and North Korea together.

And it doesn't seem like he plans on stopping. He says he is helping to train basketball players there and if all of this isn't weird enough for you, at some point, he even presented Kim Jong-un with a copy of Donald Trump's book The Art of the Deal.

Mariah Carey played a concert for the Gaddafi family of Libya.

On New Years Eve of 2009, Mariah Carey performed at a party hosted by the Gaddafi family in St. Bart's, the family that had control of Libya and was holding it under a fierce dictatorship.

Mariah claimed she had no idea who she was performing for when she booked the gig.

She later apologized and said she was embarrassed by the incident, but did not return or donate the one million dollars she got for performing at the event.

To be fair, Mariah Carey wasn't the only pop star to perform for the Gaddafi family.

Several artists performed at the same New Years Eve party or other events for the Gaddafi family, including Jay-Z, Jon Bon Jovi, (I'm really sorry to be the one to tell you this) Beyonce, Usher, and confusingly because it was in 2009, Lindsay Lohan.

Hilary Swank appeared at an event hosted by Ramzan Kadyrov, Chechen leader who may or may not have imprisoned and executed all the gay men in Chechnya, but probably did.

Hilary Swank was warned before she attended the event that Kadyrov had been accused of crimes against humanity, and her manager was like, "Oh yeah, she's definitely not going." But then she didn't not go. She, in fact, went.

After the event, Hilary went on damage control and fired several of her staff who she claimed didn't tell her the seriousness of Kadyrov's crimes.

She also said she would donate the money she had earned from the appearance to charity. If she really did, we'll never know. But she hasn't appeared at a dictator's soiree since, at least.

After being accused and then acquitted of child molestation, Michael Jackson fled from the US and took refuge in Bahrain. There he met Sheikh Abdullah bin Hamad al-Khalifa and promised that he would record an album for him in exchange for some cold, hard cash to pay off his legal fees.

The Middle Eastern prince ended up suing the Prince of Pop when he didn't deliver the promised album.

The two ended up settling out of court and Jackson never recorded the new music.

Berdymukhamedov leads one of the most oppressive and closed regimes in the world and also, was lucky enough to have a performance by J. Lo at his birthday party. J. Lo claims she knew nothing about claims that he was a murderous dictator, or that he controlled a country where satellites and internet are not allowed.

This may actually be true.

J. Lo seemed completely uneducated on who she had booked to perform for, even singing the dictator a sexy happy birthday song. One of her staff even tweeted that they were confused as to why nobody in Turkmenistan seemed psyched online that they were coming. Remember the whole not allowed to use the internet because of an oppressive regime thing? Yeah, that's why.

J. Lo made $1.5 million dollars for the performance.

Afterwards, when it became clear she'd likely sung I'm Real for a dictator, she apologized. Hey! It could happen to anyone. It's not known if she donated the money.

Kanye West performed at the wedding of the grandson of Kazakhstan's autocratic President Nursultan Nazarbayev.

Nursultan Nazarbayev has been the president of Kazakhstan since 1990, the result of rigged elections, and has been accused of multiple crimes against humanity. West was reportedly paid $3 million dollars for the wedding performance.

And it kind of seems like...nobody is paying attention?

In maybe the strangest celebrity-dictator relationship of all, Sting performed for Uzbekistan ruler Islam Karimov, completely aware that he was a horrific dictator.

Sting was asked to perform for the dictator's daughter for an arts festival. Karimov is a special kind of terrible: he regularly murders his own citizens for protesting, draining the largest lake in Uzbekistan to water his own crops, and reportedly is a fan of killing his enemies by boiling them alive. And he loves Sting!

The weirdest part? Sting claimed him not accepting $1 million to do the performance wouldn't even make a difference.

According to Sting, the reason he took the job was because, even though he knew about the whole boiling people alive thing, protesting dictators doesn't really work. I mean if you can't beat them, join them, right? Or at least perform for their family and turn a blind eye to the human rights violations.