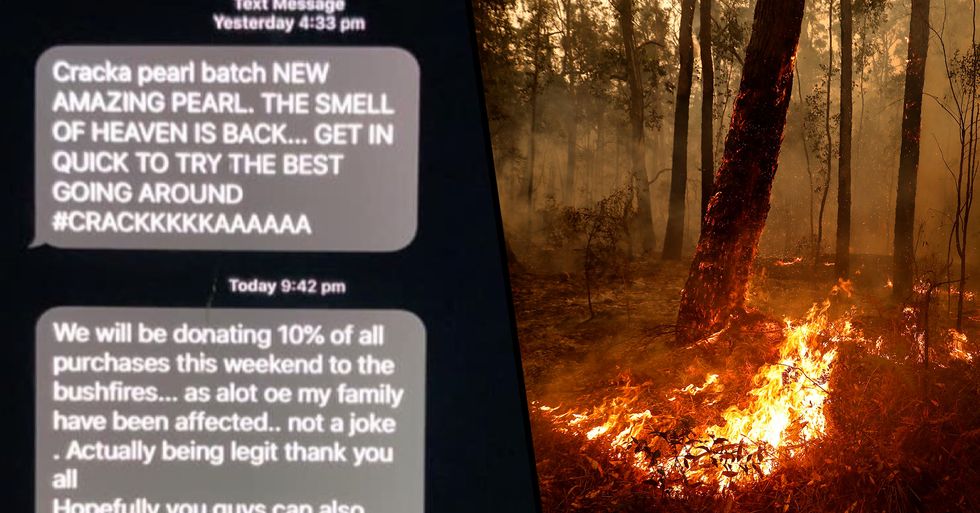 The world is doing all it can in order to provide assistance to the medical personnel in the area, from donating money to the cause, all the way to flying out there to battle the blaze. Some of our favorite celebrities have also done their bit to raise awareness about the hard work the emergency services are doing out there.

But there has been one donation with a difference. Read on for on Aussie who's been pledging money from a rather ... unexpected source.

23. Chris Hemsworth and his family.

13. Kylie Minogue and her family.

But the latest donation?

Well, it comes from a rather unexpected source. An Australian drug dealer, to be exact.

Because alongside their top quality product?

The dealer also pledged to donate 10% of whatever he brings in over the weekend to help the bushfire cause.

And in spite of his slight moral ambiguity, people are pointing out that any donation makes a huge difference in times of crisis.

Although some pointed this out.

Who is taking drugs at a time like this?

For those of you still updating your 'People With A Bushfire Response More Impressive Than Scott Morison' wallchart… https://t.co/8R0Y4sXJW0
— Michael Moran (@Michael Moran)1578566036.0

It's pretty crazy to think that these people are actually more generous than the Prime Minister of Australia.

And he hasn't been the only slightly out-there philanthropist.

Read on for the story of one woman who single-handedly raised over a million dollars in a pretty unusual way...