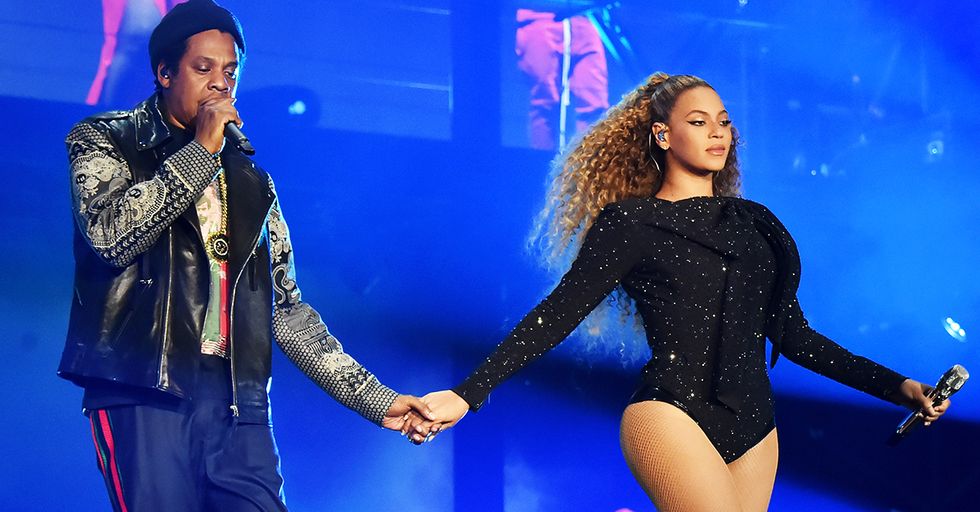 15 Celebrity Couples at the Beginning of Their Relationships and Now

Ever have those days where your faith in love needs to be restored?

We've got just the thing: these 15 celebrity couples have been together through thick and thin, proving that even Hollywood has soulmates.

Beyoncé and Jay-Z, then:

Here’s the couple in November of 2002. They became an item after Beyoncé’s musical collaboration with Jay-Z a few months earlier.

Of course, they’re still among the biggest names in music and taking the world by storm on tour together!

The pair began dating in 2000 (as seen in the above photo), but actually met three years earlier on the set of I Know What You Did Last Summer!

And nowadays, they’re couple goals more than ever!

Kristen Bell and Dax Shepard, then:

Kristen Bell and Dax Shepard started dating in 2008. Here they are at a Hollywood after party a few months later in 2009. See how the couple looks like now on the next page!

Here they are on vacation in 2018, now with two kids and adorable as always!

Tom Hanks and Rita Wilson, then:

Tom Hanks and Rita Wilson married in 1988. This photo was taken at the 1989 Academy Awards just a few months after.

Here they are in 2018 for a premiere of Hanks’ movie The Post.

Ellen De Generes has been in a relationship with Portia de Rossi since 2004!

The couple married in August 2008, and as such are nearing the 10th anniversary of their marriage! Next up, celebrity couples who have been relationship goals for decades—and one with the cutest social media presence!

These two met in acting class! Aww, isn't that sweet? And it was a long time ago, all the way back in 2001.

Today, the couple is still happy and have a child together. And I'm sure Darren is totally cool with his wife's career taking off and his not.

Maggie Gyllenhaal and Peter Sarsgaard, then:

The acting powerhouse couple has been together since 2002, and were married in 2009. Do you think having a confusing-to-spell double-A in their names is what brought them together?

Today, Maggie Gyllenhaal and Peter Sarsgaard live together in Park Slope, Brooklyn, in a house they once told Architectural Digest had "14 million fireplaces."

Goldie Hawn and Kurt Russel, then:

Having known each other since Kurt Russell was 16 and Goldie Hawn was 21, this is probably the longest-lasting couple on this list.

These two got together in 1983 and have been together ever since. It's the kind of marriage we can all dream of, even if they've never been married.

Julia Louis-Dreyfus and Brad Hall, then:

Imagine not only landing a dream job on Saturday night Live, but also getting to do it with your husband? That's what happened to Julia Louis-Dreyfus, who met husband Brad Hall while at Northwestern before they were both cast on the NBC sketch show.

Today the couple has two kids together, with Brad seemingly enjoying his time as the Second Husband (because JLD was the Veep on Veep, you see).

Ozzy and Sharon Osbourne, then:

The first family of not only rock and roll but also reality TV, Ozzy and Sharon Osbourne met in 1982.

Today, Sharon is still managing Ozzy's calendar, cancelling his 2022 tour dates (before all tour dates in general were canceled) to help Ozzy look after his health.

Angela Bassett and Courtney B. Vance, then:

These two actors had known each other since their days at the Yale School of Drama in the '80s, but didn't go on a date together until 1994.

Perennial staples of the red carpet, you can still catch Angela and Courtney looking shockingly good at just about any premiere in Los Angeles.

Kevin Bacon and Kyra Sedgwick, then:

You know how you can play Six Degrees of Kevin Bacon and find literally any actor is only six roles away from sharing the screen with the man? That's because the guy's been working since the '80s, and most of that time he's been married to Kyra Sedgwick.

And man, they still love each other today. Question: does Sedgwick count in a Six Degrees game? I mean, we know she spends at least some time with Kevin Bacon...

Elton John and David Furnish, then:

Music superstar Elton John and his husband David Furnish have been together since 1993. In 2005, right after same-sex partnerships were made legal in the United Kingdom, John and Furnish were among the first to make it official.

Now the couple has two sons who, we have to assume, get into Elton's bins of star-shaped sunglasses all the time.

Steve and Nancy Carrell, then:

Having met in an improv class (where all great couples are born), Steve Carell and Nancy Walls tied the knot in 1995.

Hey look, they still like each other! The couple is still together, have two kids, and co-created a TV show together in Angie Tribeca (talk about #RelationshipGoals [really just #RegualrGoals]).

Eva Mendes and Ryan Gosling, then:

Oh cool, the most attractive people in the history of the world got together. Great. Together since 2011, it would have been nice if they could've spread the attractiveness around a little bit.

Yup, you guessed it, they're both still wildly attractive and in love and I'm not jealous of either of them or very very sad at all.

Emily Blunt and John Krasinski, then:

Listen, I know, intellectually, that the actors who play Jim and Pam are not together in real life. And yet, I can't help but be sad that John Krasinski is married to Emily Blunt and not Jenna Fisher.

I guess it's fine that they starred together in A Quiet Place, even though it's not as easy to ship a silent, terrified couple as it was to ship a... silent, terrified couple?! Jim and Pam couldn't say anything to each other for the first few seasons because they were afraid to upset each other! Oh my god, A Quiet Place is a gritty reboot of The Office!

Rupaul and Georges LeBar, then:

Don't Rupaul and his husband Georges LeBar seem just so happy together? It could be because when they met in 1994, they were both gettin' down at a dance club.

One secret to the couple's long-lasting success together? They keep the marriage open. Rupaul told Goalcast "If [LeBar] needs to do something else somewhere else, I’m fine with that."

Judd Apatow and Leslie Mann, then:

Remember that movie The Cable Guy, where Jim Carrey played a maniac and it was kind of scary and not as funny as Ace Ventura and actually kind of traumatized me a little bit? It was on the set of that movie that Judd Apatow met his wife Leslie Mann.

They're still together today, and Leslie ends up in almost all of Judd's projects, from The 40-Year-Old Virgin to This Is 40.

Pink and Carey Hart, then:

Pink, who's always had a little edge to her reputation, met objectively badass motocross racer Carey Hart at the X Games in 2001, and by 2006 they were married.

After some ups and downs, Pink and Carey are still together and have two kids together. Truly, their relationship is radical.

Anna Kournikova and Enrique Iglesias, then:

And I thought Eva Mendes and Ryan Gosling were obnoxiously attractive together. Yeah, Anna Kournikova and Enrique Iglesias are together and married and happy and beautiful. And I'm sure Enrique sings "I can be your hero baby" to her all the time, like he did in the song that one time.

After 18 years together, Enrique Iglesias and Anna Kournikova are somehow just as attractive as they ever were. And I'm not jealous per se but I just want to know when someone will be my hero, baby?

David and Victoria Beckham, then:

David Beckham and Victoria Adams (aka Posh Spice) started dating in 1997, and married a couple of years later in 1999.

Chrissy Teigen and John Legend, then:

They continue to be an adorable couple, and Teigen, in particular, delights the internet with the jokes and cute moments she posts on her social media. Here’s the couple in a recent photo with their young daughter, Luna!

Will Smith and Jada Pinkett-Smith, then:

Will Smith and Jada Pinkett married over 20 years ago, in 1997! The photo above is the pair in 2007. Will is clearly his wife’s biggest fan. How much has changed? Find out on the next page!

Will Smith and Jada Pinkett-Smith, now:

Another decade later, two decades in total, and he’s still her biggest fan!

Justin Timberlake and Jessica Biel, then:

The couple married in 2012 and have a son together!

Sarah Jessica Parker and Matthew Broderick have been married since 1997!

And after over twenty years of marriage, they’re still going strong! Read on to take a peek at the relationships of more Hollywood darlings, including a famous musical actor and Oprah herself!

Nicole Kidman and Keith Urban, then:

Nicole Kidman and Keith Urban married in June of 2006.

Over a decade later, the couple now has two children together!

Ryan Reynolds and Blake Lively, then:

Ryan Reynolds and Blake Lively met while filming The Green Lantern in 2010, and in 2012 the couple married.

Now, with a strong relationship (and adorable social media presence) the couple also has two children as of 2016!

Oprah Winfrey and Stedman Graham, then:

Oprah and her boyfriend, Stedman Graham (right) have been together since 1986! See where Oprah and Stedman are now on the next page!

Though never married, the couple has been together for over 30 years. Here they are, pictured above at a recent benefit.

They married in 2010, and have three kids together!

Neil Patrick Harris announced his relationship with David Burtka in 2007, though the pair had been dating since 2004.

The couple married in 2014. They announced their engagement in 2011, after they’d already been secretly engaged for five years, but waited until the Marriage Equality Act was passed in their home state of New York. They’re also fathers to adorable twins, Harper and Gideon. Like this story? Share with fans of these celebs—and anyone who needs to believe in love just a bit more!