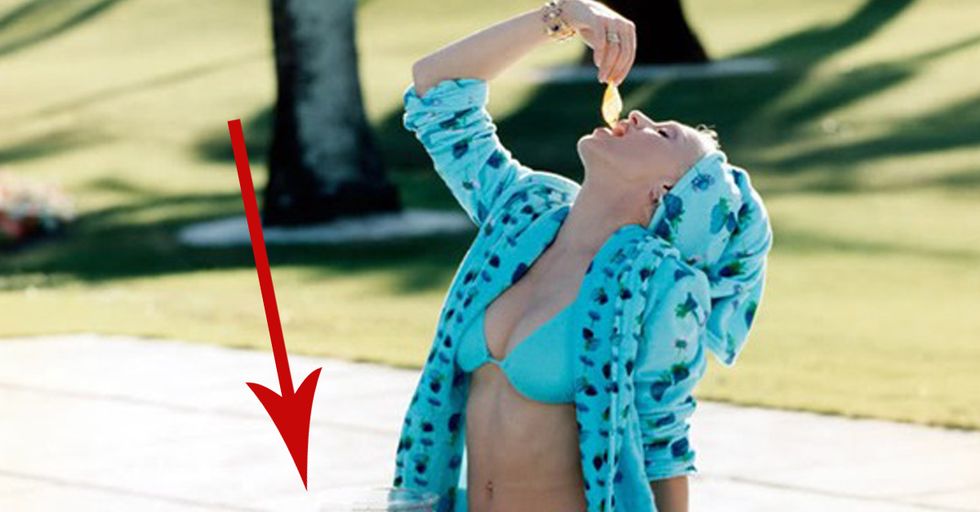 It's amazing that we think of celebrities as being perfect, otherworldly beings who exist on a higher plane where they're not affected by the elements the same way we normals are.

It's amazing because cameras exist. Being a famous person includes being bombarded by cameras at every moment, cameras ready to catch you with your pants down or your finger up your nose. Sooner or later, your not-so-finest moment will be caught on tape.

And then it will be shared on the Internet. Right here. In this list of celebrity fails.

John Travolta mispronouncing Idina Menzel's name as "Adele Dazeem" during the Oscars broadcast in 2014 will go down as one of the greatest celeb fails of all time. Watch it here, for the millionth time, but don't get too sucked in and repeat it on loop all day. You can die from cringing too much.

It's not fair. Clooney still looks so handsome, even when he's making that face.

Apparently, her anaconda actually did want some. And it wanted more than buns, hun.

In that thing, John Mayer, your body is no wonderland. As in, there's no wondering. It's allllll out there.

Now we know why Bono hides behind those glasses. He's still embarrassed about this haircut!

This is the entire decade of the '90s depicted in one photograph. At least this is the most embarrassing pic of JT out there.

Rows and Rows of Corn

Welp, we spoke too soon. Way, way too soon.

And with this picture, Kim Kardashian finally realized that her sunglasses were too big for her face. Just kidding.

Even when Queen Bey is caught in an awkward still frame, she's still fierce AF. Nothing can stop her.

Not even a fan that decided to eat her hair. She kept singing while security untangled her.

And at the Super Bowl, when she almost fell but she didn't because she's an angel queen who cannot be stopped, she gave us perhaps the most inspirational GIF of all. If you're about to fall, hop back, get your footing, then keep moving forward.

Katy Perry didn't fair so well after she flopped into a giant cake. But I also don't know of anyone who could jump into a giant cake and then dismount gracefully. Maybe Simone Biles. Maybe.

You know, life is a mystery. Everyone must stand alone.

A classic. Here's a tip I heard a little while back from Tom Cruise: If you don't want people to think you're crazy, don't jump on Oprah's couch.

Ripped a New One

Jonah Hill has seamlessly transitioned from comedic roles to more dramatic parts. He's just sew talented. Not to mention, he lost a ton of weight and became completely ripped.

Apparently, this is what happens when you don't wash off the professional photo shoot powder makeup before heading out to where the paps are snapping you with their huge flashy cameras. Who knew? Angie sure didn't.

If you thought this very dramatic, very brooding little kid was anyone other than Russell Brand, you were mistaken. Oh yes.

Even Kanye West turns around and walks straight into street signs sometimes. Those bastards don't care if you're famous or not. They'll make anyone feel the pain.

It's unclear what made Harry Styles fall on his bum, but it's OK. That's what makes him beautiful.

The '90s were a great time for weird poses. I love Sarah Jessica Parker's face in this one. It says, "Go ahead. Ask me why I'm squatting like this. I'm currently trying to think of a really good reason."

Before Joseph Gordon-Levitt was making his way through 500 Days of Summer, he was on the 3rd Rock From the Sun. And he looked like this. And it was amazing.

"Don't look at me. I'm only here to silently weep while draped in my mom's tablecloth."

Sandra Bullock won an Oscar. But first, she posed for this picture.

Leo fought a bear in The Revenant.  But first, he tamed this leopard print. And held his hair up really weirdly.

In fact, there are several photos out there of Leonardo Dicaprio holding objects strangely. He gives Alexis Bledel a run for her money.

Fun fact: This is the exact moment Leo found out he got the part in Titanic. They called him on a seashell. You know, because the ocean.

Gosh, isn't is so embarrassing when you're having a leisurely day, sitting on your diving board snacking on goldfish and the paparazzi spy on you? Madonna can relate.

Have a Good Trip

Jennifer Lawrence is the patron saint of celebrities who prove they're human. Time and time again, she's tripped and fallen on national television.

See You In the Fall

This is one of those "agains." We thank you, Jennifer Lawrence, for knocking the magic aura of celebrity down a few notches.