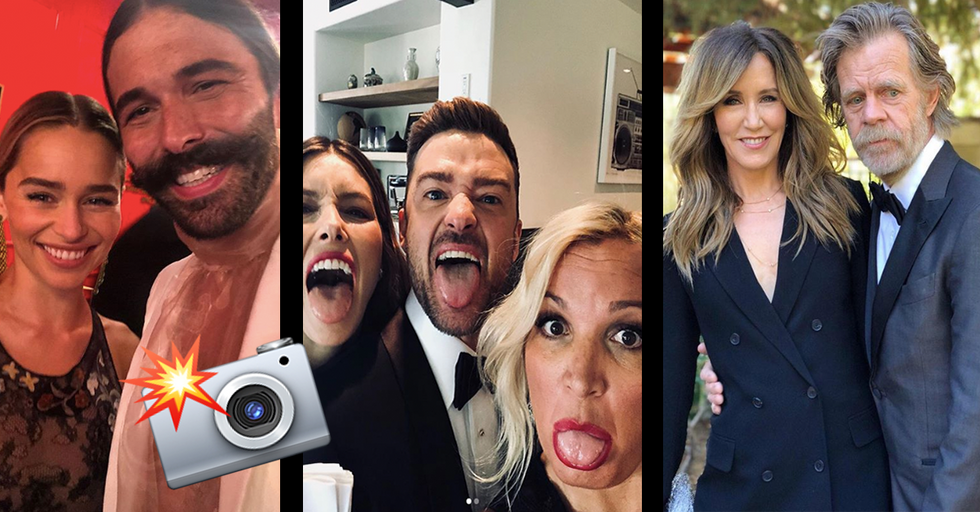 The Emmys are the most glamorous night of the year for television, and the red carpet this year has pretty much left everyone with their jaws on the floor. The celebs look so good this year, y'all! It is ridiculous. But the best thing about the Emmys is that the stars are just as excited to be there as we are to watch from our couches...in our pajamas...with our popcorn and chocolate.

Many of the stars out at the Emmys tonight are sharing their unique perspectives on their own personal Instagram accounts, and that is just the most fun to see! You really feel like you are there experiencing the elegance with them. And man, they look so dang good tonight. Here are some of our absolute favorite behind-the-scenes moments the stars themselves captured on their phones and shared with us during the red carpet and the hours before this spectacular Emmys show!

The SNL star and nominee tonight looks like a frickin' angel in her sparkly pink dress. And standing next to her friend and fellow SNL wonder woman Kate McKinnon, it almost makes you think that these two should have hosted the show...

Jessica Biel, her husband Justin Timberlake, and producer Michelle Purple just, you know, being very toned-down, mature adults before they head to the Emmys.

Um, pretty much everyone is in love with Queer Eye's Fab Five, including Mandy Moore, who had to snap a pic with the group. Can I get a "Wowee!" for Jonathan's bare chest?!

This is how Alex Borstein prepared for her night at the Emmys. (In case you can't tell, that is her mom giving her a very thorough massage.) It worked because she took home the Emmy for Best Supporting Actress in a Comedy for her role in The Marvelous Mrs. Maisel!

The Downton Abbey and Godless star is looking ravishing in bright blue tonight, and here she is on her way to the Emmys!

Comedian Emily Heller absolutely killed the red carpet with her gray Getty Images purse that mimics the company's watermark, and she couldn't help but share the actual watermarked photo on her Instagram. This is what genius looks like.

Not that she needs it, but this is the makeup table that helped prepare Allison Janney for the big night. This is no joke. This is real. And it is impressive.

This is a big night for Trevor Noah! It's his first time nominated for The Daily Show since he took it over from Jon Stewart. Can you see the nerves in his eyes?

The mother of dragons is absolutely slaying her Emmys look! She seriously looks insanely amazing at every single awards show. I don't know how she does it.

The incomparable Ted Danson posted this picture of him and his uber-talented wife, Mary Steenbergen, arriving on the gold carpet! I would like to request that they adopt me as their child.

This woman is unreal. Look at the glamour! Look at the elegance! That dress is insane. It's only fair that she did this amazing photoshoot before she left for the Emmys.

I wasn't kidding when I said that everyone wants a piece of the Fab Five! Megan Mullally and the Queer Eye guys had a moment on the red carpet, and she filmed it and shared it on Instagram because she is the best.

Remember when Dakota Fanning was an adorable little girl?! Well, now she's a gorgeous knockout on the red carpet. She looks incredible — I love the color of her dress.

Let's talk about Felicity Huffman (in that pantsuit!) and her husband, William H. Macy. They are one smoking hot Hollywood couple, and honestly, we don't deserve them.

John Mulaney is looking spiffy in his powder blue suit! He took comedian Dan Levy to the Emmys as his date tonight, and may I say, that's one handsome duo. Share this with your most Insta-active friend!