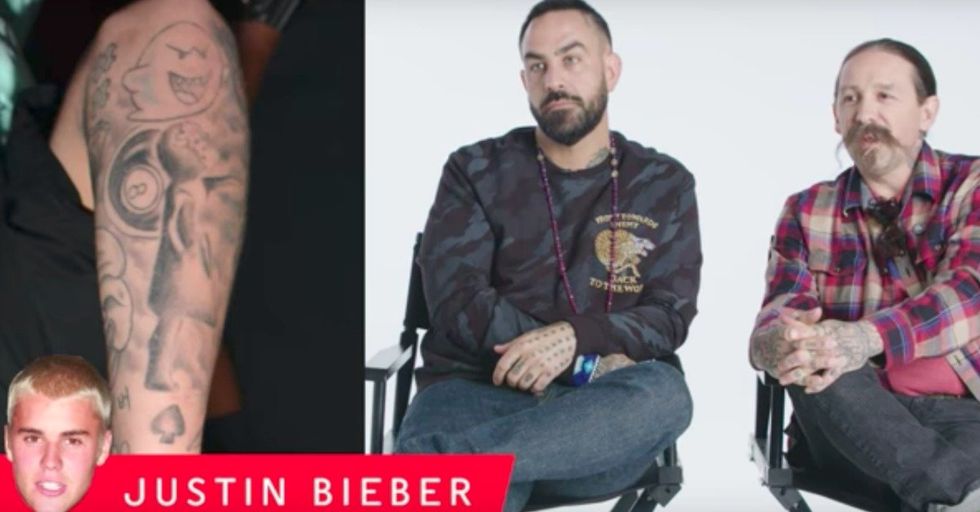 Judging by the amount of celebrities with tattoos, you almost can't be famous without having one. These days, it's not only more widely accepted to have ink, it's de rigueur.

From personal mementos to big flashy pieces of art, it goes without saying that some of these permanent drawings are better than others.

To get an expert analysis, GQ brought on the hosts of Spike TV's Ink Master, Chris Nunez and Oliver Peck, to analyze celeb tattoos.

Whether you like it or not, it appears that tattoos are her to stay as a popular way of expressing one's self.

While they were once considered the realm of outlaws and ne'er-do-wells, they've now gone 100% mainstream.

They've become especially huge in the world of celebs.

Maybe it's because actors and musicians don't have day jobs that they'd get fired from if they showed up sporting so much ink. Or maybe it's because they use the tattoos to help sell their image to the press and fans.

Either way, Hollywood's A-list have some of the recognizable ink around.

The tattoo craze that seems to be here to stay can be largely attributed to the example they set, again, for better OR worse. This is the back of Angelina Jolie, who seemed to be a bit ahead of the curve when it came to getting ink done.

Sometimes their work is among the best that artists have seen.

I mean, they do have the money and cache to get the best tattoos, so that stands to reason. Here's Rihanna flaunting her skin art, which has been admired and praised by many, though it's not without its detractors as you'll see.

Because celebs are so often in the spotlight, their ink can come under intense scrutiny not just by fans, but tattoo experts as well.

Surprise, surprise: Not all celeb tattoos are that great. In fact, as you'll see in the analysis of some of the biggest stars in the world, sometimes it's downright terrible. Who would have thought? See who makes the cut and who definitely doesn't on the next page.

"One thing we know about Bieber is that he has the worst taste imaginable. It doesn't surprise me at all the every tattoo he has is completely terrible. We call this 'littered with garbage.'" He's not wrong.

"I didn't know Rihanna had a big crazy hand tat. I think it's better when it's done in Henna — because then it goes away."

Ouch! The permanence of tattoos makes that criticism a little difficult to deal with.

Oh, well. Something tells me that Rihanna will make it through this harrowing criticism. Even if the hand tat was misguided, she's got the attitude to pull it off.

"This lion looks like a lion! It looks like what it's supposed to. It's a nice tattoo." To that, we say "rawr!"

"This lion is a mess. If you look at this photo, you end up with this turd smear on your finger." No "rawr" this time.

"I like any skin rip. I'm in. This is clean. It has legible shading, fits his forearm well."

"This is the purest example of — you just don't care anymore."

You can check them all out here:

What do you think? Which celeb tattoo do you think wins the award for, "What were they drinking when they went out inking?"

No matter where you stand, you have to have an opinion on this polarizing trend.

Are they sultry and gangsta? Or do you think that even the best tattoos are still trashy? I'm not saying the celebs will care what you think, but you're certainly entitled to sound off!