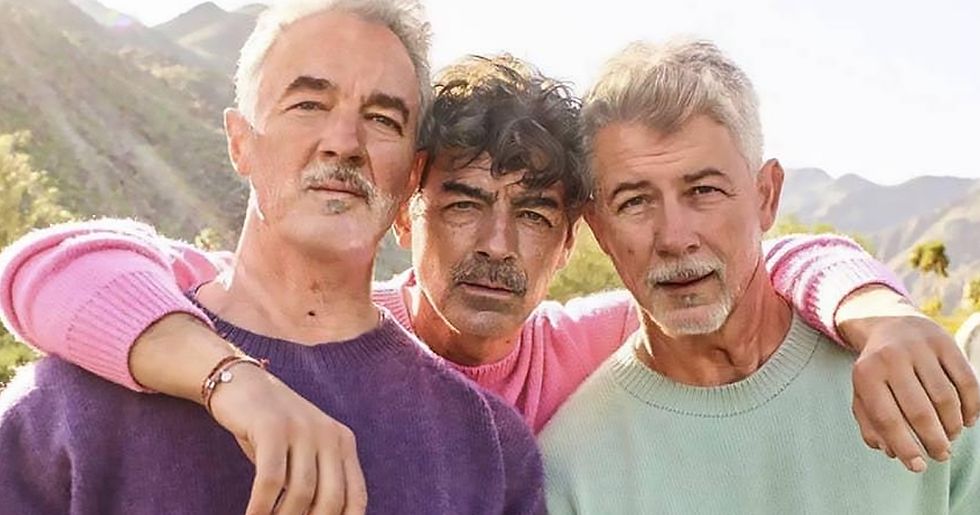 Ah, old people. They've pretty much got it figured out — after spending their entire lives grinding away at a nine to five, they take their social security checks and head down to Florida. There, they can hang out, play shuffleboard, and once a year get a visit from their grandkids. It's a pretty sweet gig.

Unfortunately, that retiree life is pretty far off for most of us. It might be nice to have a reminder of what's to come. Maybe that's the appeal of FaceApp, an iOS and Android app that will scan a selfie and let the user make changes. You can add a smile, change the hairstyle, and, most importantly, see what the subject will look like when they're old.

Of course, we regular folks aren't the only ones who are going to age over the next few years. Celebrities are getting older too. (Stars! They're just like us — slowly marching towards the grave!) Check out what some of today's biggest celebrities look like as old people through FaceApp.

Since we, as a culture, are right now at peak Keanu Reeves, you have to imagine that, for the rest of his days, Keanu Reeves will remember the year 2019. Today he is in John Wick 3 and Cyberpunk 2077 and Toy Story 4 and is universally beloved. In his old age, Keanu will surely think of this time in his life and smile.

The conversations about LeBron overtaking Michael Jordan have only begun picking up steam in the last few years, but by the time LeBron is this age, we'll know one way or the other.

Beyoncé's been a fixture in pop culture since the mid-2000s, and she's not going anywhere any time soon. But twilight shall come to her too, and when it does, it looks like she'll still be looking fierce.

Taylor Swift's new single "Me!" is such an upbeat, almost childlike jam that it will be truly disconcerting to see her perform it at age 65. (But damn it all if I won't still be front row for it anyways.)

The former Disney Channel star is going to get old one day, and I hate that. I mean, I'm indifferent as to what happens to her, but it will mean I'm also old, and that is unacceptable.

Here's a sneak peek of what Star Wars star Daisy Ridley will look like when she inevitably stars in Star Wars Episode X: Skywalkers On Parade.

Rihanna looks pretty good here in her fake old age, but to be honest, it's been so long since she released new music that I kind of can't tell if she aged that much anyway since she went away?

Oh no. If old George Lucas here threw up a black hood, he would literally look exactly like Emperor Palpatine. What a tragedy — to create the most evil character of all time and then slowly age into him.

The youngest-ever "self-made" billionaire (she definitely had a leg up by way of having the most famous family of this decade), Kylie Jenner cannot use her "self-made" billions to buy eternal youth, can she? (I honestly don't know, I can't fathom what people who have that much money buy.)

Can we all agree that, while this old man version of Ed Sheeran looks weird, it doesn't look that much more weird than Ed Sheeran always looks?

Is this how old women's soccer superstar Megan Rapinoe is going to look in four years when the next World Cup rolls around? I suppose that depends on the results of the 2020 election.

Already an old man, FaceApp makes TV's most famous psychiatrist (or is he a therapist? Or is he even credentialed at all?) look even older. That said, I am much more inclined to take his advice here because the older you get, the more wisdom you accrue.

In about 40 years, we will be looking at this face whenever we go visit our grandmothers in the morning because Ellen DeGeneres' talk show will never release its hold on them, not ever.

It's good to know we'll get to see Robert Downey Jr. get this old in real life, but all I can think about is his poor little girl from Avengers: Endgame and think about how she'll never get to see her dad at this age and, well, it's just too sad.

This man is a 16-time World Heavyweight Champion. How many times will he have won the WWE's top title by the time he's this old? (And because I so respect Ric Flair, the first man to reach 16 World Title reigns, I hope the answer is still 16.)

A lot if celebrities ebb and flow out of the public eye, so they age suddenly in their times away. But now that she's married into the Royal Family, Megan Markle is going to be ever-present. That means that, like a frog in boiling water, she's going to age so slowly we're not even going to realize it until we wake up one day and see that she's old.

The writer and star of Hamilton, Lin-Manuel Miranda will still be the king of Broadway by the time he's this age. At this point, though, rap will be as lame to kids as big band music is to us today.

Ooh boy, Chris Pratt sure looks old here, but it does not look out of place. This is how old he feels to me. Wasn't it something like 50 years ago when he first dropped all that weight for Guardians of the Galaxy? I am over it. Hey Chris Pratt, when you star in damn near every franchise known to man, people are gonna get sick of you!

One day Ariana Grande will age out of her role as a teen pop queen. And on that day, we can only hope the music industry has something nicer to say than "thank U next."

YouTube superstar Pewdiepie is one day going to age into an old man. The only question is this: at that point, will he still be streaming Minecraft?

Aw man, one of two things is going to happen: either the adorable star of Stranger Things is going to one day be this old, and we'll all have to reckon with the fact that youth is fleeting, or she's going to fade from the public eye and we won't see her get this old. Both options are a bummer.

I've always kind of thought of Tom Hanks as America's dad, so you can imagine how hard it is here to see him become America's grandpa. By the time Tom Hanks is this old, he'll be recording Toy Story 10: Skywalkers in Parade. (That's going to be the only movie subtitle in the future. The Skywalkers are bankable.)

The Community and Atlanta star is going to wear his age well (if only because of his face here, it seems like he'll still be able to convey the only emotion comedy straight men need to convey: bewilderment).

Our girl Nicki's looking good in her old age. I'm sure that, even at this age, she'll be slaying fools with her sharp verses (but remember, rap will be lame by then. No music stays cool forever).

The Parks and Rec star looks like she'll be aging gracefully. Maybe it's just her association with longtime LA and New York-based improv school the Upright Citizen's Brigade, but doesn't she look here like your favorite teacher?

The man maybe best set-up to carry the Marvel universe into its next phase, Tom Holland will be playing Spider-Man for years to come. Even at this age, we'll still see ol' Tom swinging through New York, if Marvel was on top of their game when they signed him and locked him up long (long) term.

Once SNL actresses reach a certain age, they start acting in prestige television. Here we see Kate McKinnon in her "Playing a mom in an HBO drama" phase.

Not gonna lie, we chose to run the Harry Potter actor through FaceApp just to see if he looked at all like he did in "adult" makeup in Harry Potter and the Deathly Hallows. But what we found was far more surprising — he looks exactly like Dumbledore.

By the time Lil' Nas X is this old, not only will "Old Town Road" still be the number one songs in America, but we will all — every last one of us — will have had a verse on one of its remixes.