Celebs Who Are Almost Unrecognizable With Platinum Blonde Hair | 22 Words 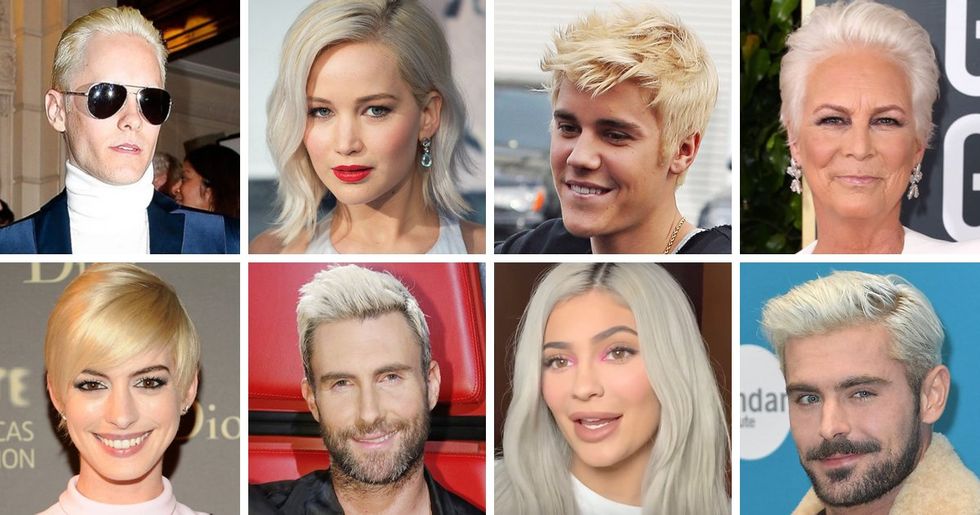 Celebs Who Are Almost Unrecognizable With Platinum Blonde Hair

Everyone goes through periods where they look in the mirror and think, "My hair needs a change." Humans are complex, what do you expect? Sometimes you just need something a little different. A haircut or hair dye can do wonders. Who hasn't stepped out of the salon, feeling like a million bucks? There's something so refreshing about a change of pace when it comes to hair – maybe it's just breaking our normal routine or that feeling of a new beginning.

It's fun to change it up every now and again. While the majority of us usually change it up every so often, celebrities are often changing their appearances constantly. Whether it's for a new acting role or a new album, it seems that most celebs are chameleons when it comes to their hair.

Here is a list of celebrities who look completely different when they dyed their hair platinum blonde. Seriously, some of these celebs require a double take.

The star may play Ted Bundy in the upcoming Extremely Wicked, Shockingly Evil and Vile but he's rocking more Elsa from Frozen vibes here. Let's be honest. The man would look good with any hair color.

The Kardashians are known for her enviable curves and raven stresses, but Kim can rock an icy 'do with the best of them. She's serving serious looks here with her platinum hair.

Did it take you a moment to recognize the Baby Driver actor? Elgort looks completely different with his bleached-blonde hair.

Who. Is. That. Honestly, I'm very into a platinum-haired Chris Messina. The Mindy Project actor proves he can pull off icy blonde with the best of them. He's giving Kim K a run for her money, to be honest.

Kylie is queen when it comes to changing up her hair color. The businesswoman and television personality has been known to rock hair that ranges anywhere from sea foam green to bright pink.

The pop icon bleached her hair in 2016 and looked fabulous at the Met Gala that year. She even sang about her bleached hair in her song, "Dress" off of her Reputation album.

The Mother of Dragons has platinum hair on Game of Thrones, but the British actress dyed her hair in real life as well. She's so stunning, she could dye her hair any color and still look fab.

2016 must have been the year when pop stars decided to bleach their hair. Remember when The Biebz rocked this 'do?

The natural brunette actress bleached her hair back in 2013 and looked awesome.

The Venom actor debuted his platinum hair at the 2018 Comic-Con while promoting his villainous role in the Tom Hardy-led movie.

The singer looks completely different with bleached blonde hair. He didn't have it for very long, but it was a super fun look!

The actress is a natural blonde, yes, but platinum is a completely different ballgame. The actress revealed her new look in November 2018.

The original scream queen looked incredible with her white-blonde hair at the 2019 Golden Globes. She's a 2019 mood.

The Girls actress took a break from her usual light brown hair and stepped out in 2014 with a bleached-blonde look.

The pop star has had all sorts of hairstyles, but rocked short, platinum-blonde hair in 2015.

The Oscar-winning actress has had her natural blonde hair in movies as well as brunette hairstyles in certain roles. But in 2016, she stepped out with this flawless icy platinum look.

The Big Little Lies actress went platinum in 2016 and looked as radiant as ever. Seriously, how can someone be so beautiful?

The Single Parents actress parted with her brunette roots in 2018 for this fabulous blonde moment. It's like an alternate reality, where Blair Waldorf had a blonde twin sister.

The rapper went blonde in the summer of 2018 and looked awesome.

We're used to seeing him transform himself for movie roles, but The Suicide Squad actor dyed his hair in real life back in 2015.

Kim Kardashian posted this picture of the Kardashian-Jenner matriarch back in 2017. Jenner rocked a platinum blonde look like the true boss that she is.

The singer and songwriter proved she could rock any hairdo with this gorgeous platinum look.

The pop singer flaunted a short, platinum blonde 'do in 2018 and looked amazing.

The model-turned-actress had an Ice Queen vibe for the premiere of her film, Valerian And The City Of A Thousand Planets.

In 2017, the actress rocked a platinum buzzcut. This look might be the coolest look ever.

The model and entrepreneur is typically known for her buzzed blonde hair, but when she rocked these long, white-blonde tresses to the 2018 BET Awards, she definitely turned some heads.

The rapper and fashion designer took a page out of his wife's book and has been rocking blonde hair lately.

Does this list make you want to dye your hair platinum blonde?

We can't blame you if it does! Share this with your friend who is always talking about getting a new hairstyle. Maybe this will give them the courage they need!