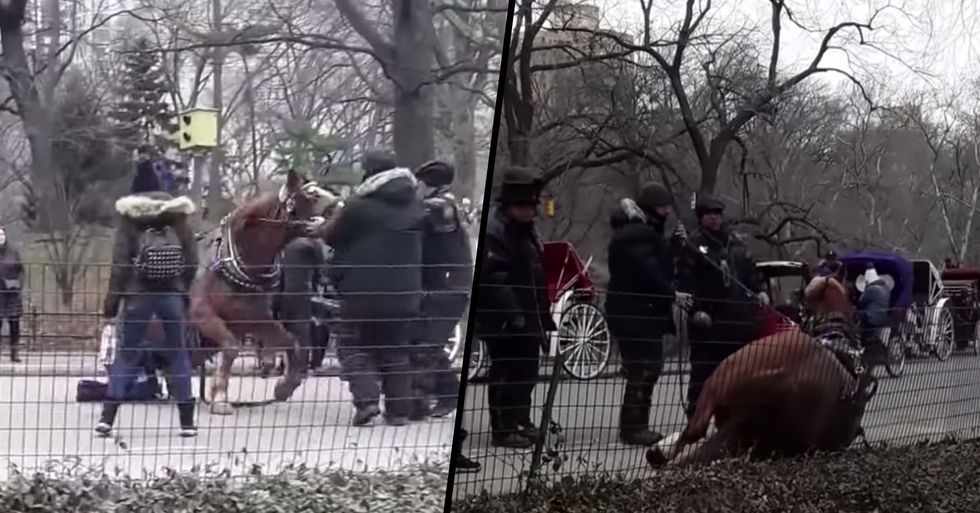 Working animals are truly put under strain on a daily basis.

Of course, tourists don't see the problem with taking a horse-drawn carriage ride around New York City, but they have no idea what the poor horse carrying them goes through every single day.

And now, a Central Park carriage horse has tragically died after collapsing out of exhaustion last week.

Keep scrolling to learn more about this devastating story...

Us humans have a long history of working with animals.

Animals began working with humans for agricultural purposes, with dogs being one of the first working animals with our hunter-gatherer ancestors.

Once trained, we could get animals to work numerous jobs in our aid. For instance, dogs have been domestically trained for years to assist in the emergency services, and horses have been trained to help transport people, and, today, to race - there's a lot of money in horse racing.

The matter of using working animals today causes a lot of controversy...

Animals being used for the entertainment and convenience of humans is often protested against...

With thanks to the work of PETA, practices such as using animals in circuses, using horses and donkeys to pull carriages full of people, and allowing individuals to sit on their backs and ride them, have been criticized heavily and bans have even been put in place. For instance, many circuses have now prohibited the use of live animals in their performances.

But some working animals date back centuries...

It is unknown as to when exactly horses became domesticated, but the clearest evidence of the earliest use of a horse as a means of transport is from chariot burials dated to c. 2000 BCE.

Horses were our main method of transport before automobiles were invented...

Many have argued that forcing horses to pull carriages is cruel and inhumane.

There have been countless incidents in the past of horses becoming physically exhausted from pulling carriages, especially when they are full of people. Horses have been known to collapse to the floor out of exhaustion, and they don't get regular breaks for food and water.

NYCLASS and PETA have protested against this very practice...

NYCLASS (standing for New Yorkers for Clean, Livable and Safe Streets) is an animal rights organization that fights for the ethical treatment and rights of all animals. They have partnered up with PETA in the past to protest the usage of horses for human convenience, especially in crowded cities such as New York.

But, despite all of the protesting...

Horses are still subjected to the streets every day to carry out their unfortunate duties of pulling heavy carriages full of excited tourists over and over again.

And they're a very popular tourist attraction.

But some heartbreaking footage has emerged recently that shows the harsh realities of the horse carriage trade...

The video, that was uploaded to Twitter on the 29th of February, shows a horse struggling to stand up after collapsing while pulling a carriage in Central Park.

It was later found out by PETA that the horse was a twelve-year-old named Aisha who had spent her entire life pulling carriages for tourists in New York.

Aisha is seen to repeatedly stand up and fall back down...

And it seems that her back legs have buckled under her own weight from exhaustion.

Toward the end of the video, the poor horse seems to just give up...

It was later discovered that Aisha was placed in a transport vehicle and taken away to be eventually euthanized after she could no longer stand alone.

This is utterly heartbreaking.

The fact that Aisha has had her life cut so short because she was working for us humans is appalling.

The Mayor of New York spoke out over the incident...

Speaking to CBS News, Bill de Blasio said, "We've made real progress in animal welfare but we must go further."

The mayor previously made a campaign pledge to ban horse carriages during his first mayoral race...

But it seems that, sadly, not much has changed.

Edita Birnkrant, executive director of NYCLASS, believes there was an underlying medical issue with Aisha and called the incident "abuse."

Speaking to CBS, she said, "It's very clear that it's not possible for horse carriages to operate in NYC without causing tremendous suffering, cruelty, and abuse to the horses."

Since Aisha died, many have taken to the streets to protest against using horses and carriages...

NYCLASS protested, "If you love horses don't take a ride, drivers work them till they die!"

However, "experts" have put it down a "cardiac event"...

Christina Hansen, a spokesperson for the NYC carriage industry, told CBS in a statement that the twelve-year-old mare was healthy and likely suffered from a "cardiac event."

She insists that animal rights activists are exploiting this tragedy...

"Animal rights extremists are already exploiting this tragedy to further their anti-horse agenda during our time of grief and shock," Hansen said. "This medical emergency appears to be something that could happen to any horse, any time, anywhere, for any number of reasons, under a wide variety of conditions."

DISTURBING. This carriage horse from Clinton Park Stables is seen stumbling and unable to straighten their back le… https://t.co/TbbrmDCGvX
— julie Ⓥ (@julie Ⓥ)1583020256.0

It is clear that Aisha collapsed from exhaustion, and this is a prime example of how the horses who pull carriages for a living are treated and it is unacceptable. Watch the video for yourselves here...