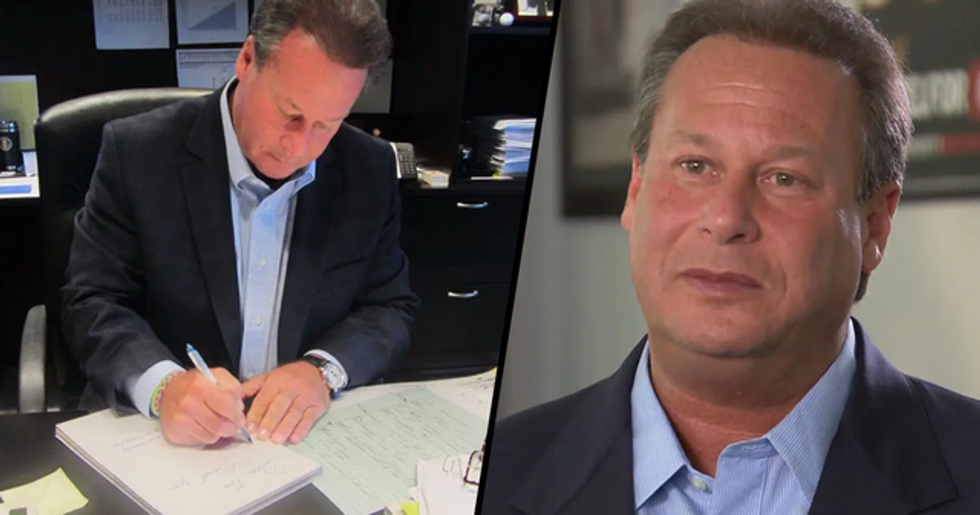 CEO Writes 9,200 Employee Birthday Cards a Year as a Way to Say Thank You

For many of us, it can be far too easy to feel like a cog in a machine. Many in larger corporations never get to even meet their boss - let alone enjoy the feeling of interacting with their higher-ups.

Well, one CEO from BELFOR Holdings Inc., has decided enough is enough. Sheldon Yellen hand writes a birthday card to each of his 9,200 employees every year to express his gratitude. And it seems his efforts are paying off, as studies show working in an environment wherein one feels appreciated near-universally leads to better work.

But you know what can make all the difference?

A little bit of human connection, and feeling appreciated in the work you're doing.

As one CEO learned.

A big boss has hit headlines this week for figuring out how to show his employees he appreciates them - in a rather unusual way.

This is Sheldon Yellen.

He's worked in business for years.

And from the moment he began climbing the ranks, Yellen made a promise to himself - to never let his employees feel taken for granted.

And the way he does it?

Yellen writes every single one of his employees a birthday card.

Well, it was at first. But now, Yellen has over nine thousand employees. That's a lot of birthday cards!

It's a pretty big undertaking.

"There is an inside joke with acquisitions that I ask prior to closing: 'How many more people?'" he told Business Insider's Chris Weller in 2017."Since I am constantly calculating [the birthday cards] in my mind rather than 'What is the EBITDA?'"

There's a clever reason behind this.

Yellen knew by writing the cards his employees would come say thanks. "And it worked," he said. "It got people talking, we started to communicate more, and I like to think it helped me earn respect within the company."

And it's not just birthdays.

According to the company director of marketing communications Alexandra Gort, Yellen writes thank-you notes, anniversary cards, holiday cards, and writes to his employees' kids when they are sick.

It's a savvy business decision, too.

The move has created a culture of closeness within the company - but "it's also something that doesn't have to cost a thing," Yellen points out.

KIndness is free, after all.

"When I learn of random acts of kindness being performed in the field, I take it upon myself to again, reach out in writing, and send a thank you card so that person can know they are appreciated and that their efforts don't go unnoticed."

And it turns out, he's right.

According to career experts, successful managers are ones who consistently praise employees' good work.

Expressing genuine interest in their employees is one of the most valuable things a boss can do, workers told Business Insider.

There's even research which suggests that employees feeling underappreciated are far more likely to quit.

And Yellen has never regretted his decision.

"When leaders forget about the human element, they're holding back their companies and limiting the success of others."

"Focusing only on profit and forgetting that a company's most important asset is its people will ultimately stifle a company's growth."

Amen, we say. Want to hear about some not so great bosses? Keep scrolling for thirty-five of the worst boss stories on Reddit.