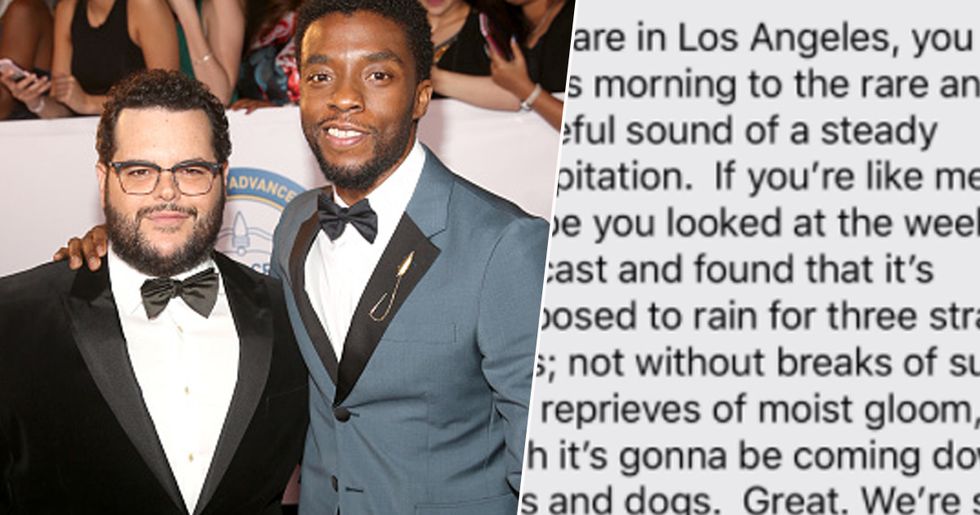 Following the heartbreaking news of his death, his co-star, Josh Gad, has came forward and revealed the final text message Chadwick ever sent him.

Now, his co-star, Josh Gad has shared the final message he received from Chadwick.

Gad, who starred with Chadwick in the 2017 movie, Marshall, shared the final message he ever received from Chadwick and it's truly beautiful. The long message reads:

If you are in Los Angeles, you woke up this morning to the rare and peaceful sound of a steady precipitation," Chadwick's text began. "If you're like me, maybe you looked at the week's forecast and found that it's supposed to rain for three straight days — not without breaks of sunlight and reprieves of moist gloom. But yeah, it's gonna be coming down like cats and dogs. Great, we're stuck inside these damn quarantines because of the COVID, and now we can't even get no sun in Cali. Come on now! But now that the rain has stopped and today's storm has cleared, I urge you to go outside and take a deep breath. Notice how fresh the air is right now, after our skies have had a three-week break from the usual relentless barrage of fumes from bumper-to-bumper LA commuters.

And now today's rain has given the City of Angels a long overdo and much-needed shower. Inhale and exhale this moment, and thank God for the unique beauties and wonders of this day. We should take advantage of every moment we can to enjoy the simplicity of God's creation — whether it be clear skies and sun or clouded over with gloom. And hey, if the air is in the clear right now, and it does rain tomorrow, I might even put jars and bins out and catch the rain, throw that in the water filter, and I have water more alkaline than any bottled brand out there.