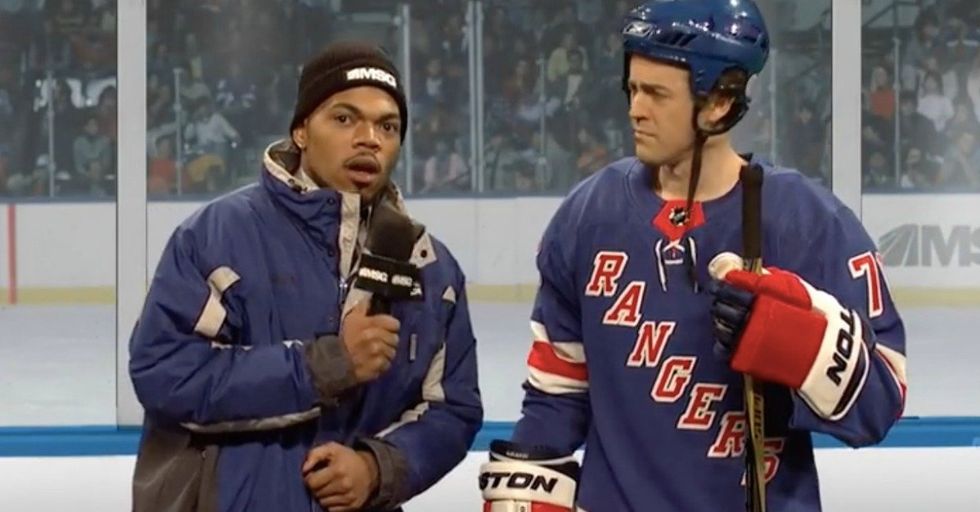 Okay, in all honesty, we couldn't fill out the end of that sentence to save our lives. In fact, we – like most people in the United States – really don't know hockey. And neither does Chance the Rapper, apparently, because he did a skit on Saturday Night Live that perfectly demonstrated how every non-hockey fan feels when they're presented with the specter of men in ice-skates bashing each other.

On Saturday, Chance The Rapper was the host of Saturday Night Live.

He did several skits, but the one that stood out most – to hockey fans, at least – was the Sports Announcer skit. In it, Chance (real name, Chancellor Bennet) plays a Knicks reporter named Lazlo Holmes who is forced to cover the New York Rangers home game against the Edmonton Oilders when the usual reporter goes on paternity leave.

Hilarity ensues, because Chance, like most of us, doesn't actually understand hockey.

This SNL sketch with Chance the Rapper as a clueless hockey reporter has me in stitches right now.
— Chris Hine (@Chris Hine)1511069787.0

Hockey is one of the most impenetrable sports there is. Sure, it's not up there with polo or other equestrian sports, but it is very difficult to access, particularly for non-white people and women. Which explains Chance's reactions to the sport.

When presented with an interviewee, the unpronounceably-named Brady Skjei (who is based on an actual professional hockey player) Chance's reaction is priceless.

"Yes, that is an S, a K, and a J all next to each other," the rapper says. "So that's a nope." Chance then makes the (eminently sensible) decision to just call him his "main man," because honestly, who can pronounce that name. Can you?

Things don't get any easier when Chance is asked about the Ranger offense.

As the skit continues, things get more and more confusing for Chance... and us.

When the play-by-play correspondent gives an actual Rangers play from a real-life game, Chance's expression is all of. He quickly pivots, pointing out the only black hockey fan in the stands. "There is a black hockey fan, he doesn't look cold at all, so I will be talking to him at the post-game show, find out what's happening there."

And this is a consistent theme that runs through the skit. Chance feels extremely cold.

When asked how he's doing at the beginning of the skit, he replies, "In a word, cold. It's very cold all around here." Later, when he speaks with the unpronounceable Skjei, he asks, "Let me ask, are you also cold as hell?" To this, Skjei replies,"Nope, kind of hot, actually." Exactly.