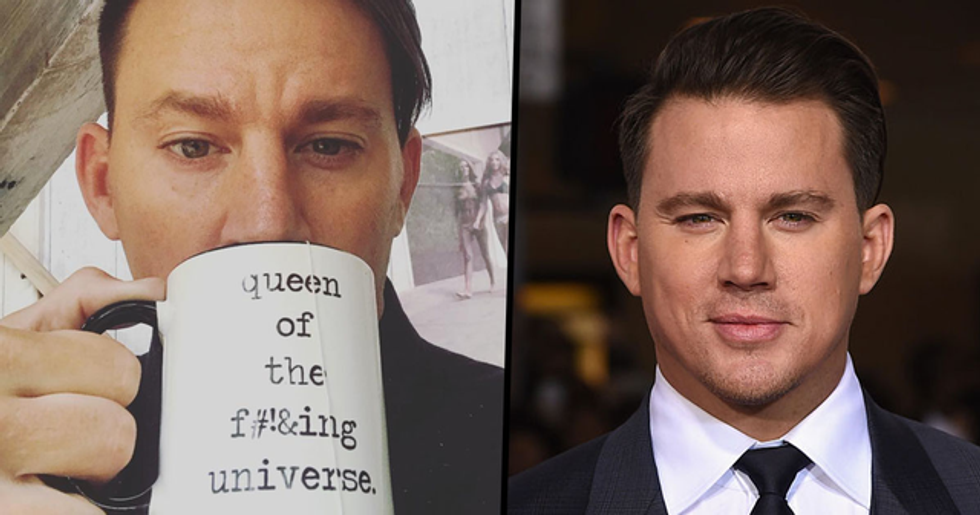 Channing Tatum is an undeniably great actor. His range is spectacular - whether he's breaking hearts in romantic comedies like Dear John, getting them racing in action-packed thrillers like G.I., making us laugh uproariously in 21 Jump Street, or shaking what his momma gave him in Magic Mike.

But alongside his prowess as an actor, there's no denying that Tatum is well known for something else - being really, really, ridiculously good looking. Ask anyone if they find Tatum attractive, and you can pretty much guarantee that the answer will be yes (they're lying if they say no). He's a certified hottie, and nothing can change that.

Or, at least, that's what we thought. But Tatum has gone for a more ... experimental look, and fans just aren't sure that he can pull it off. He showed off his new 'do on his Instagram, and no one was quite sure it was such a good idea after all.

Channing Tatum is a well-loved actor.

Born in Cullman, Alabama in 1980, the star grew from humble beginnings. Before he broke into the big time, he worked as a stripper, under the name "Chan Crawford."

Although Tatum has never been ashamed of his past, stripping was never his end goal.

He had dreams of becoming an actor and was scouted by a talent agent in the year 2000. He made his first appearance as a music video dancer, then gradually worked his way onto the big screen.

He started out in a slew of romantic comedies.

In 2006, he starred as the romantic lead in Shakespearean remake, She's The Man, alongside Amanda Bynes. From there, Tatum began to be recognised as a rom-com star, with movies such as Dear John and The Vow.

Tatum has gone on to prove that he's a jack of all trades.

A particular fan favorite is his character in 21 Jump Street (and the sequel, 22 Jump Street), which showed Tatum in a different, more self-deprecating light.

Tatum has many strings to his bow.

He's also well known for his role as Duke in the G.I. franchise. Although they were critically panned, the movies are hugely successful with audiences around the world, and give actions fans exactly what they want.

Another reason you may recognize Tatum?

This absolutely iconic Lip Sync Battle performance, in which Tatum dressed up as the one and only Beyonce, and performed her girl-power hit "Run The World (Girls)"!

But there's one role which is undeniably his most famous.

Tatum stars in Magic Mike, plus the sequel, Magic Mike XXL, as Michael Lane, a veteran exotic dancer showing the new kid the ropes. It was this role which made Tatum a household name.

The movie had another effect, too.

It turned Tatum into the most eminently captivating star in Hollywood. After you see his dance moves in Magic Mike, you'll totally understand why.

On top of this are his classic good looks.

Even for those who aren't actually into Tatum, it's impossible to deny that he's an incredibly good-looking man. Just look at that jawline!

For many, he's the gold-standard celeb crush.

For thirsty girls around the world, Tatum is the ultimate pin up. It seems that pretty much everyone out there has a crush on the actor.

His dance moves (which he clearly picked up while stripping) are enough to get anyone hot under the collar. We could watch him all day.

But there's also something charming about the star.

And another facet of his enormous hotness?

His hair. Whether it's long or short, Tatum's shining brown 'do has always played into his clean-cut, wholesome-yet-cheeky image.

Sure, he's been experimental with cuts in the past.

Channing showed off this long-and-floppy-on-the-top-with-shaved-sides look at the Los Angeles premier of Smallfoot, in September of 2018. It's a little edgy, but still a classic Tatum cut.

But now Tatum has changed all that.

He's taken a risk with his recent 'do and stepped far outside of the box with this look. It's certainly a risk, and has changed his appearance quite significantly.

And it isn't just a bold cut that Tatum has gone for.

It's a whole new color. The brunette star has clearly decided that blondes have more fun, and has gone for an all-over bleach in his latest style.

And it's clear that he knew that his new look would cause some waves, as he added the caption "Bad idea?" alongside the pic.

And people were pretty shocked.

There's no denying that this is quite a departure from Tatum's usual look. It's a far more edgy, high-fashion vibe than many of his fans are used to seeing on him.

Tatum asked his followers for their opinion.

It takes a brave man to turn to the general public and ask for their brutally honest opinion like that. We have to give props to Tatum for that bold move!

But it seems the public aren't convinced.

As it currently stands, the ratings are around sixty-forty against his new do. It seems his fans just aren't ready for such a monumental change.

He posted a follow up to the brutal ratings with a caption, "Well, bad ideas are sort of my thing." He followed up the lighthearted post with a shrug emoji.

There's one thing that both fans and haters alike have noticed, though.

With his new, bleached, buzzed cut, Tatum has gained a new celebrity lookalike - Eminem! The rap star rocked this style many years ago.

Many fans noticed the resemblance.

What's odd is that no one really thought the two looked alike before - but now, with one little hair switch-up, the pair look like they could be related! Will the real slim shady please stand up?

Some think that Tatum looks unrecognizable.

It's true that when comparing his new look with older pictures side-by-side, you can see that one small(ish) hair change has massively altered the star's whole appearance.

Some aren't convinced by the look.

This new hair style certainly changes Tatum's whole vibe; he's quickly moved from wholesome hottie to a more alternative look. For those who were into the "before", it makes sense that they'd be less keen on the "after".

Some drew attention to one weird coincidence.

Ariana Grande has also recently debuted a platinum blonde 'do for her newest music video. Some have joked that Tatum's new look is a tribute to the singer.

Nonetheless, the look is not without fans.

In fact, for some of those who were already crushing on Tatum, this new look is just another reason to lust after the star.

Despite the fact that the majority of the reception was negative, those who are proponents of the bleached look are clearly feeling pretty strongly about it.

The thirst was very real among some.

And if you can't be thirsty about Channing Tatum on Twitter, then where can you, hey? We just wonder how he feels about all the attention.

Following his hair announcement, Tatum posted a final (although still hair-related) story, showing off his braiding handiwork. We think the internet can all agree on this look, at least!