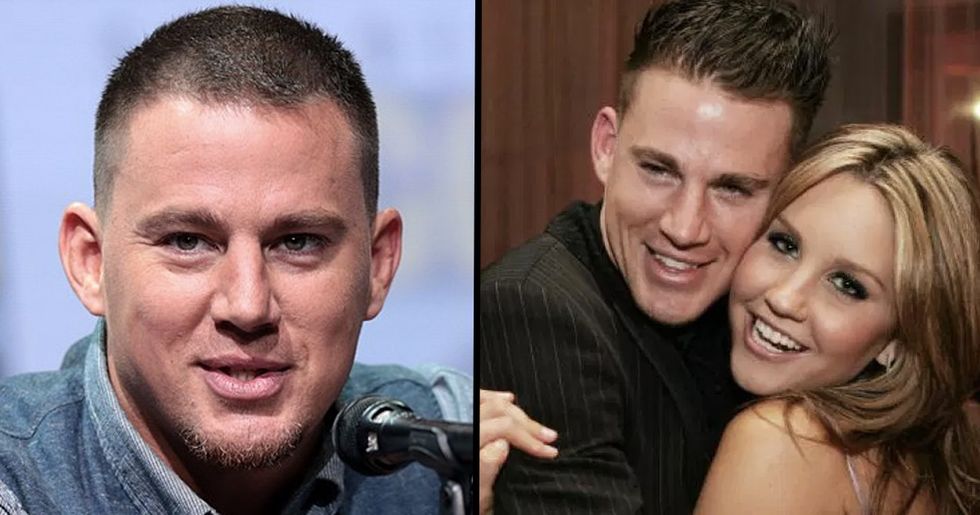 Channing Tatum, what a sweetheart. Who knew that the villain from the Step Up series would end up being such a softy? Wait– my editor is telling me that he's not actually the villain and I'm just jealous of his dancing and general physique. Well, that sounds about right. Where was I? Oh yeah, Channing Tatum is super lovable for many reasons, but most recently, he has said some super nice things about his former She's the Man co-star Amanda Bynes.

For those not in the know, or generally asking yourselves who the eff Amanda Bynes is, I am truly sorry. Amanda Bynes (2002's next Carol Burnett) was a young comedy star who was destined for greatness, all before doing what all child stars inevitably do– crumble under the pressures of adulthood.

Why is this all relevant now?

Well, after 8 years of shying away from the spotlight, Amanda Bynes is back! She gave an awesome interview to Paper Magazine about her time away, what her future plans are, and her time as America's most prominent child star.

In the interview, Bynes touched on her experience working with Tatum.

Bynes recalled having to "totally fight for Channing [to get cast in She's the Man] because he wasn't famous yet. He'd just done a Mountain Dew commercial and I was like, 'This guy's a star — every girl will love him!'" We'll come back to that commercial in a second, by the way.

But the producers were not on board.

"[The producers] were like, 'He's so much older than all of you!' And I was like, 'It doesn't matter! Trust me!'" And guess who was right! That movie is the bomb and helped launch Tatum's career.

While doing press for his new live show in London, reporters had a chance to ask Tatum a few questions.

I hope they started by asking for some dance tips because as I mentioned, I need all the help I can get. They also probed the actor a bit on if he had read Paper Magazine's piece, and what his response was to Amanda's comments.

Tatum was touched by Bynes' help.

Channing complimented Bynes saying, "I love her. I'm so happy she's killing it again and just back on the right. She's so talented and so special. She's been doing it...I mean, I think it's so impossible when you start at such a young age to keep perspective. It's tough."

He followed up with some on-set memories.

"She was just so alive," he said. "You never knew what was going to come out her mouth, she was just on fire...I haven't seen her in so long. I love you, Amanda, and I hope you're doing well." Can we start praying for a reunion now?

Here's what he had to say in full.

I asked @channingtatum whether @amandabynes was responsible for launching his Hollywood career with She’s The Man,… https://t.co/eDTxkypMQF
— Bethany Minelle (@Bethany Minelle)1543448855.0

Aw, how sweet! He seems so genuine. I'm sure it's taken a lot of hard work and dedication to get to where he is in his career, but he does seem to give Amanda a lot of credit.

Here's that commercial. It's hilarious, but probably not what Channing wanted to be doing with his life as a struggling young actor.

His work on She's the Man lead him to more prominent roles.

Shortly after, he was cast in Step Up which catapulted his career to what it is now.

Channing has hard work, talent, and apparently Amanda Bynes to thank for his Hollywood successes.

Where would we be without movies like Dear John (okay bad example), GI Joe (okay, another bad example), Jupiter Ascending... I should stop.

But really, Tatum has been killing it.

It's hard to imagine some of these awesome movies without him. Though sadly, while his career was on the rise, Bynes' was on a bit of a downward spiral.

During her time away, Bynes has been going to fashion school in Los Angeles.

She mentions she's interested in designing a full line one day, but "[she] wants to get back into acting first."

And she's taken a long time off. Bynes starred in She's the Man way back in 2008.

According to Bynes, this is the film that triggered her depression. "When the movie came out and I saw it, I went into a deep depression for 4-6 months because I didn't like how I looked when I was a boy." Pausing, she added, "I've never told anyone that."

Something that would be tough for any young girl, especially with all eyes on her.

She says seeing herself in the wig and sideburns was "a super strange and out-of-body experience. It just really put me into a funk."

After She's the Man she moved onto a remake of the John Waters classic, Hairspray.

Bynes recalls, "that movie to this day was the most amazing experience I've ever had on a set." Uh yeah, who doesn't want to Footloose all over the place with Zac Efron and John Travolta?

But at the same time, life was getting more difficult.

During production, she remembers "reading an article in a magazine that [called Adderall] 'the new skinny pill' and they were talking about how women were taking it to stay thin. I was like, 'Well, I have to get my hands on that.'" Like many of her fellow millennials experimenting with the amphetamine in their teenage or college-aged years, Bynes says she was able to get a prescription after going "to a psychiatrist and faking the symptoms of ADD."

This started an addiction that led to her walking away from the movie Hall Pass.

It was "the mixture of being so high that I couldn't remember my lines and not liking my appearance" that led to her walking off. "I did leave... it was definitely completely unprofessional of me to walk off and leave them stranded when they'd spent so much money on a set and crew and camera equipment and everything." In the end, the movie came out without Bynes, and is, well, not good.

After leaving the Hall Pass set, Bynes attended a screening of her final film, Easy A.

This movie is a banger by the way. And everyone involved thought the same– except Bynes. "[I remember] having a different reaction than everyone else to the movie. I literally couldn't stand my appearance in that movie and I didn't like my performance. I was absolutely convinced I needed to stop acting after seeing it."

And she did quit acting.

“I saw it and I was convinced that I should never be on camera again and I officially retired on Twitter, which was, you know, also stupid. If I was going to retire, I should've done it in a press statement — but I did it on Twitter. Real classy! But I was like, 'You know what? I am so over this' so I just did it. But it was really foolish and I see that now. I was young and stupid."

That wasn't the only thing Bynes posted on Twitter.

I'll let you research that stuff for yourself, but Twitter became a space where Amanda would rattle off incoherent thoughts leading to public speculation that she had psychiatric problems. Those rumors turned out to be false.

Amanda is doing much better now.

"I’ve been sober for almost four years now," Bynes credits her parents with "really helping me get back on track." Luckily it does seem that those days are well and truly behind her. She's been sober and getting a further education in Los Angeles and hopes to get back into the world of acting soon. *fingers crossed!*

She doesn't even recognize her old self.

"Those days of experimenting [with substances] are long over. I'm not sad about it and I don't miss it because I really feel ashamed of how those substances made me act. When I was off of them, I was completely back to normal and immediately realized what I had done — it was like an alien had literally invaded my body. That is such a strange feeling."

Of course, Twitter had a lot to say about the return of their Queen.

in honor of amanda bynes making a comeback, here is my favorite sketch from the amanda show https://t.co/qvWHfokcAb
— jam (@jam)1543286212.0

Even tweeting out their favorite Amanda Show sketches. Bring in the dancing lobsters!

Even Lil Yachty weighed in.

Who knew he was such a fan?

I agree with that Drake Bell thing. He found himself a deep, dark mean hole too.

amanda bynes made it fashionable to tweet through a meltdown and she deserves a pulitzer
— Zack Fox (@Zack Fox)1543452849.0

How many celebs have followed in her footsteps since? Like all of them. Even the president. #AmandaBynes2020

For true Greatest of All Time status, she needs to have a killer comeback. She's on her way for sure!

This is my new mantra.

Hear that, mom? I'm just like Amanda Bynes. I'm weird, I have low self-esteem, and you used to be proud of me. I'll be fine!

This one is for all the straight women reading this article.

Does Channing Tatum really owe his career to Amanda Bynes or does it take way more than one movie to launch a career? Are you looking forward to Bynes' comeback? Let us know!