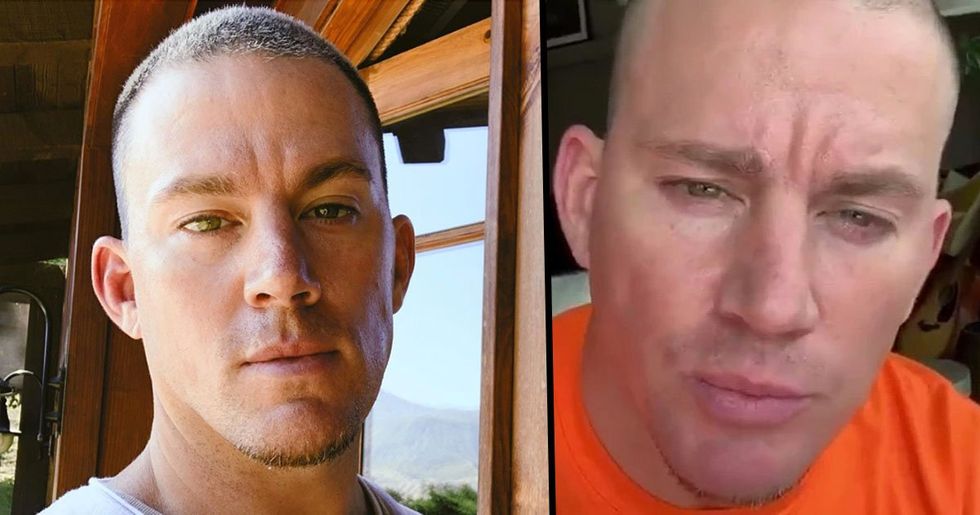 There's long been a sad stereotype about male mental health. While women are generally more free to openly discuss feelings and emotions, men are often encouraged to put on a brave face and keep whatever's going on inside bottled up. Truly, the patriarchy punishes us all!

But now one of Hollywood's most manly men has spoken out against these societal prejudices. The Magic Mike star has admitted that he's in therapy. The best part - he doesn't even think it's a big deal and is more concerned with sparking a conspiracy theory about his astrology app instead.

Born in Cullman, Alabama in 1980, Channing Tatum has had a pretty fascinating life.

Before he rose to fame playing a heartthrob in a range of romantic movies, Tatum struggled to break into the business for years, working under the name “Chan Crawford."

Since then, he's had an illustrious (and varied) career.

Instead of being typecast in one particular role, Tatum has managed to spread himself across a wide range of genres. Fan favorites include  21 Jump Street (and the sequel, 22 Jump Street), wherein Tatum proved that he has comedy chops.

Tatum has also starred in action movies, including the critically-panned, but still successful, G.I. franchise.

Tatum isn't afraid to be a little silly.

His performance as Beyonce on Lip Sync Battle will go down in history as one of the most iconic performances of all time.

But there's one role that Tatum is undeniably best known for.

Tatum stars in Magic Mike, plus the sequel, Magic Mike XXL, as Michael Lane. Lane is an old-hat stripper teaching the new kid of the block some moves.

Tatum is pretty much universally beloved.

On top of his classic good looks and incredible dance moves, Tatum just generally seems to be a stand-up guy.

What makes us think that?

He doesn't bow down to the traditional (and typically toxic) ideals of masculinity. For one thing, Tatum has never been ashamed of his sex worker past.

He doesn't take himself too seriously.

Tatum just generally seems to be an open-minded, trustworthy, and pleasant guy. And, this week, this has truly proven true.

There are many stereotypes surrounding therapy.

Many think, for example, that it makes you weak to need to talk openly about your emotions. Others assume that people in therapy are there because they're ill - not because they want to maintain their good mental health.

But Tatum is doing what he can to dismantle this view.

This week, he spoke openly about going to therapy on social media. And the best part? It wasn't even the reason for his post.

In fact, Tatum was talking about something else entirely.

The reason for his post? He had beef with a certain astrology app, called The Pattern - which he believed was a little too accurate.

The Pattern claims to have a reason for its accuracy.

It supposedly uses your date of birth and astrological sign in order to give you a daily horoscope which will help you make better life decisions over time.

But Tatum has a big problem with it.

Speaking directly to the app, Tatum ranted, "How do you know what you know about me, Pattern? I don’t even know if I want to know this stuff."

Tatum also commented that he believed that the app must be listening to his conversations, saying "I was just in therapy yesterday… and I just get a notification on my phone this morning… using the exact words that we were using in therapy."

Tatum posted it as an Instagram story, before also uploading it to Twitter to ensure that it got the attention that it deserved. Clearly, the guy wants answers.

Channing Tatum getting thoroughly shook by astrology and interrupting himself to tell people to go to therapy is, a… https://t.co/N9SKggLMVP
— andi zeisler (@andi zeisler)1562969771.0

There was one thing that stood out - the calm and NBD way he spoke about going to therapy. "I was just in therapy yesterday – yeah I’m in therapy, whatever. Everybody should be in therapy," the star said.

But there was something else people noticed.

It seems that many people have had similar suspicions about The Pattern before - and seeing Tatum talk about it only confirmed their fears.

There was another direct result, too.

Channing Tatum crashed The Pattern app....or is it because Mercury is in Retrograde? https://t.co/QyW0lufsrj
— Darrick Coleman (@Darrick Coleman)1562977702.0

The sheer amount of traffic that Tatum directed toward the relatively unknown app all but wiped it out. Once it returns, though, they'll have a lot to thank Tatum for.

However, the whole thing may not be quite as funny as it seems.

People who've had past poor experiences with the app were quick to respond to Tatum's post, proving that privacy isn't a joke.

But there's at least one thing that we can all agree on.

Whether you believe in astrology or not, or are hyper-aware of your privacy or not, Tatum has at least proven one valuable point. There's no shame in choosing to go to therapy - and we hope that more men will bravely follow in his footsteps.