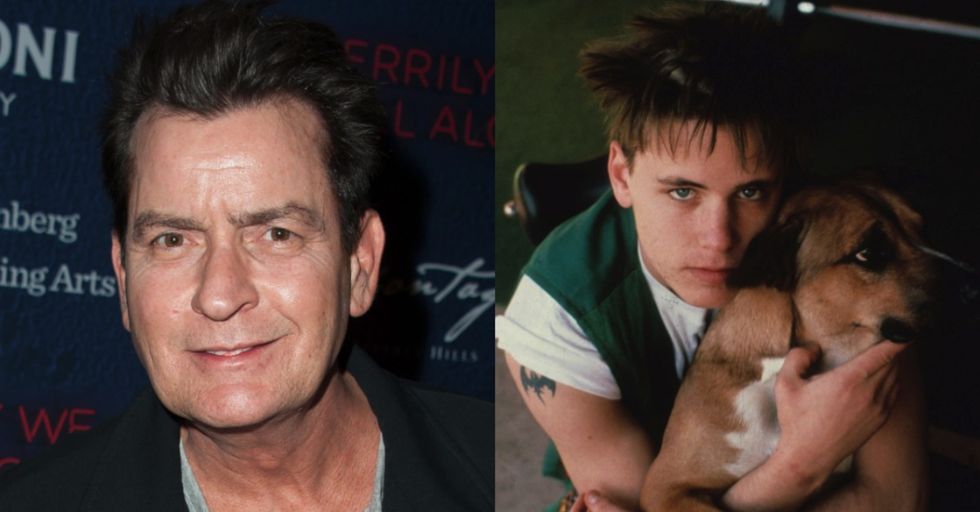 According to a report from the National Enquirer, Charlie Sheen raped the late actor Corey Haim when the boy was just 13 years old.  Now, amidst a tornado of controversy, Sheen is denying all allegations of rape, according to E! News. A friend of Haim's, fellow actor Dominick Brascia told the National Enquirer about the incident. More reports hint that Sheen not only abused Haim as a child but threatened to kill an anonymous child actor for coming forward with the information.

The Enquirer said that at least a dozen other sources told the Enquirer that Haim told them personally that Sheen abused him.

Haim's best friend, Corey Feldman, said that Sheen abused Haim in his book. In the memoir, Coreyography: A Memoir, he wrote, "At some point during the filming [of Lucas, Haim] explained an adult male convinced him it was perfectly normal for older men and younger boys in the business to have sexual relations, that it was 'what all guys do.' … So they walked off to a secluded area between two trailers during a lunch break for the cast and crew, and Haim, innocent and ambitious as he was, allowed himself to be sodomized."

Another source, who was a friend of Sheen's, confirmed that Sheen admitted to having sex with Haim.

This source said that Sheen claimed it was consensual. Sheen was nineteen and Haim was thirteen years old. That's not consensual. Yet another person, who worked with Haim on The Lost Boys, confirmed that Haim had confessed to having non-consensual intercourse with Sheen.

A different source told the Enquirer that Haim thought that he was in love with Sheen after the encounter because he was so confused about what was happening.

Like many victims, Haim struggled to make sense of the trauma and move forward with his life. This was further complicated by the fact that Sheen told Haim that it was normal for adult men to have sexual relationships with younger boys.

Sheen's ex-wife said that she found out that Sheen belonged to child-porn sites while they were together.

The sites had many pictures of young, pre-pubescent young men and women that were clearly not adults, performing sexual acts on each other. According to SomeEcards, Sheen's ex-wife wrote that the site, "promoted very young girls, who looked underage to me with pigtails, braces and no pubic hair performing oral sex with each other." On top of these troubling facts, clues came forward that allude to Sheen making death threats to people who wanted to expose him...

Twitter user Mandy Stadtmiller published a text conversation between herself and an anonymous child actor who had said that Sheen had abused them.

Stadtmiller offered to write a piece exposing Sheen for the child actor, but the actor was too afraid of being assassinated for outing Sheen. The photos she shared showed other examples of people implying that they too were worried to come forward with information about Sheen's gross transgressions–for fear of being killed. Stadtmiller wrote, "Now that Charlie Sheen allegations coming out, I’ll share connective thread: death threats. I offered to donate my journalistic fee to a child actor to go public against Sheen; his response was the fear too great. That the abuser has a public history of such threats."

Other photos in Stadtmiller's thread include more accounts that imply that people didn't come forward about Sheen's abuse because they thought they would be killed.

This particular document is from Denise Richards. She threatened to take Sheen to court to ensure that he couldn't see their teenage daughters. Sheen's response was to threaten to kill her parents and herself.

Haim died at age 38 from pneumonia. He struggled with drug addiction for much of his life.

This is a screenshot of an interview where Corey Feldman talks about the sharp contrast between Haim's career and Sheen's. Even though both Sheen and Haim used drugs, Sheen received much more attention at the same award shows where Haim was snubbed. Sheen went on to be successful after leaving Haim with lifelong trauma.