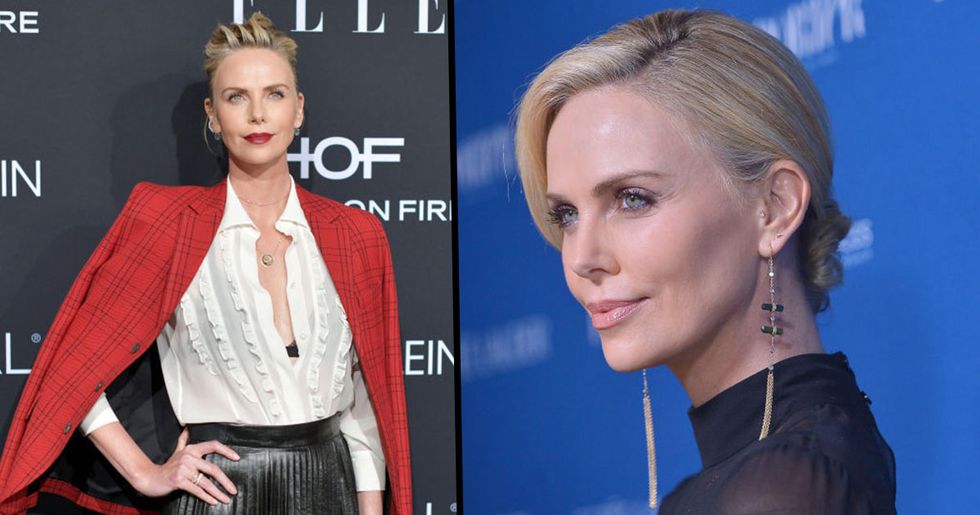 Charlize Theron Got a Bowl Cut and Looks Totally Different

When you think of Charlize Theron, it's likely that you picture a stunning, South African princess - all long, tanned limbs, big blue eyes, and flowing, bouncy golden locks. And that's undeniably her iconic look. But what you may not realize is that Charlize is not afraid to switch it up. In fact, over the years, she's rocked a massive array of experimental styles - many of which you have probably totally forgotten about.

But it's her latest look that's probably her most out-there choice yet. Charlize has opted for a very editorial look - and fans have been pretty divided on the chop.

Born in Bononi, South Africa, in 1975, Charlize Theron is an extremely talented actress.

Since then, she's starred in a wide range of genres.

And, on top of her acting range, she's also pretty multifaceted in her appearance. In 2003, the undeniably stunning Theron donned prosthetics to play serial killer, Aileen Wuornos, in Monster. Her performance earned her an Oscar win - the first-ever for a South African actress.

Along with being hugely talented in many different arenas, Theron is also absolutely beautiful. Some people are just blessed. Theron also has a pretty iconic look that most of us always associate with the star.

But, in reality, Theron has rocked a wide variety of looks over the years.

The blonde bombshell wasn't always such. Here she is in 1996 rocking a mousy brown, side-swept bob.

She certainly isn't afraid to switch it up.

Just one year later, at the Mad City premiere in 1997, Theron rocked up with this platinum blonde cropped 'do.

Even when she's rocking her signature blonde locks ...

Theron is always willing to experiment with different styles. Here she is in 2001 rocking corkscrew curls.

She takes inspiration wherever she can.

While winning her Oscar for Monster in 2003, Theron emulated Marilyn Monroe in this old-Hollywood style.

And though known as a blonde ...

Theron is equally happy to change up her color, leaving the world shook as she turned up to the 62nd Annual Golden Globe Awards with this dark brown 'do.

In fact, she's pretty open-minded when it comes to hair color.

In 2007, she attended the 21st Annual American Society Of Cinematographers Awards rocking a softer brunette tone.

She's also quick to switch it up.

Later in 2007, she appeared at the East of Havana New York City Premiere having gone back to her dark, chocolatey shade. Our hair feels damaged just thinking about it.

And, as Mad Max fans will remember ...

Theron is also happy to change up her hair length. While she's known for longer, more princess-esque locks, she looks equally stunning with a skinhead.

In fact, there's barely any look that she hasn't rocked.

She even makes the awkward growing-out process look good.

At the 2016 MTV Movie Awards, she came up with an innovative solution for awkward-length hair, creating three cute buns.

Blonde and Charlize Theron seem to go hand in hand - although this lighter, icier tone gives her a more high-fashion vibe.

It seems as though Theron has perennial hair-related itchy feet.

Because, earlier this year, she returned to brunette at the Long Shot premiere in Paris.

And that wasn't the end of her changes.

At the premiere of the Long Shot in New York, less than a week later, Theron had gone several shades darker plus opted for some trendy baby bangs.

And her latest switch-up is the most shocking yet.

This week, Theron took to Instagram to debut her latest style - a controversial bowl cut. It's reportedly a style for her upcoming role in Fast & Furious 9.

Is there any look she can't pull off?

Thank you to Charlize Theron for so consistently providing us with hair inspiration. Looking for some even more out-there hair looks? Keep scrolling for some beautiful looks inspired by the beauty of nature.