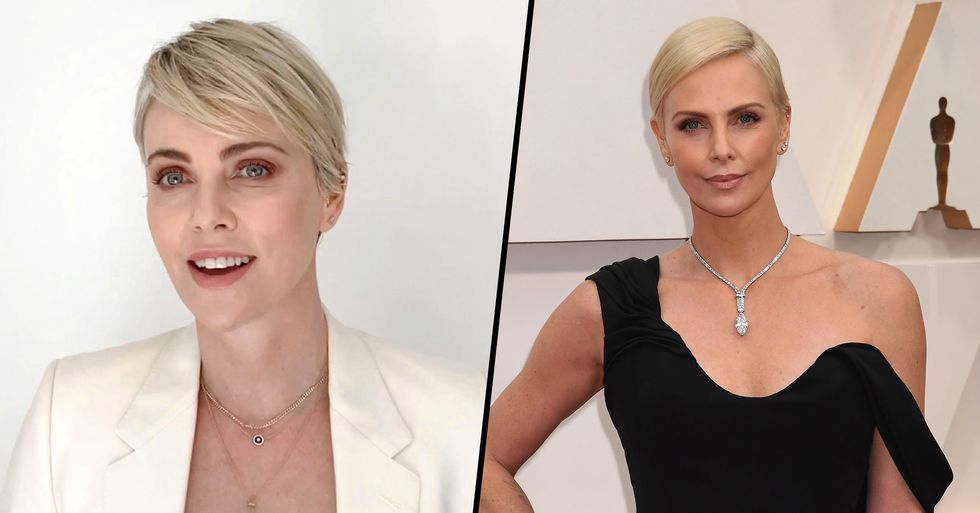 Charlize Theron Says She's 'In a Relationship' With Herself

Chloe Rowland
Charlize Theron has got candid about her love life this week, and she had some serious points to make...

Charlize Theron has spoken out this week about her relationship status.

And she had a lot to say about it.

It was all prompted by a question from one of her children...

And she didn't have the answer many people would have expected.

Born in Bononi, South Africa, in 1975, Charlize Theron is an extremely talented actress.

Since then, she's starred in a wide range of genres.

And, on top of her acting range, she's also pretty multifaceted in her appearance. In 2003, the undeniably stunning Theron donned prosthetics to play serial killer, Aileen Wuornos, in Monster. Her performance earned her an Oscar win - the first-ever for a South African actress.

Along with being hugely talented in many different arenas, Theron is also absolutely beautiful.

But, behind Theron's sunny exterior...

She has actually led a deeply troubled life.

For one thing, Theron grew up in apartheid-era South Africa.

"It was only until I was 12 or 13 that I went to an art school in Johannesburg where I really got to witness firsthand absolutely the atrocities of apartheid," she explained in a 2019 interview.

"I didn't really truly understand what any of this really did to me as a young child until I was in my mid-30s and I went to therapy for the first time, because of a relationship that was failing."

"And what I discovered while in therapy, trying to save my relationship, was that I had a lot of trauma from being a young child growing up in South Africa during the apartheid era."

"I benefited. My life was more comfortable because of the suffering of a lot of people who just by chance were born in the 'wrong' skin color."

"That was a lot for me to carry; it still is. It's something that I'll carry for the rest of my life."

And that isn't the only trauma Theron has bravely opened up about.

She also talked about her past sexual assault by a high profile (but as yet unnamed) Hollywood director - another thing that still affects her to this day.

"In sexual harassment, you're always waiting for that moment where there's full closure, where you feel like you've actually ... had your moment, where you get to say your piece. And that never really happens."

"I've heard this repeatedly in hearing other women's stories, and that is the unfortunate thing about sexual harassment. You never get that moment where you feel like the tables are reversed and now he's finally getting it."

"I actually did disclose his name."

"You don't know that because every time I disclosed his name, the journalist made the decision to not write his name, and it goes to show just how deeply systemic this problem is."

But alongside all of the darkest aspects of her past...

There's one that overshadows everything. And Theron bravely decided to speak up on the subject last year.

Theron grew up with an abusive and alcoholic father.

"My father was a very sick man," she revealed.

Theron grew up only knowing one way of life.

And growing up with an addict parent really takes its toll on a family.

"It was a pretty hopeless situation. Our family was just kind of stuck in it."

It's clear that growing up with this level of fear has lasting impacts.

"The day-to-day unpredictability of living with an addict is the thing that you sit with and have kind of embedded in your body for the rest of your life, more than just this one event of what happened one night."

And it wasn't just Theron who was impacted.

"I think our family was an incredibly unhealthy one. And all of it, I think, scarred us in a way."

But the situation culminated in the most tragic way possible.

For Theron's family, there was no happy ending to her traumatic childhood.

"It's unfortunately what happens when you don't get to the root of these issues."

"Of course, I wish what happened that night would have never happened."

When Theron was just fifteen, she survived one of the most tragic situations imaginable.

And she last year, for the first time, shared the harrowing details of what happened the night her mother killed her father.

It started with her father returning home inebriated.

"My father was so drunk that he shouldn't have been able to walk when he came into the house with a gun."

Theron and her mother were (understandably) terrified.

"My mom and I were in my bedroom leaning against the door, because he was trying to push through the door."

It came down to a battle of strength.

"Both of us were leaning against the door from the inside to have him not be able to push through."

But Theron's father was determined.

"He took a step back and just shot through the door three times."

Theron and her mother were incredibly lucky.

"None of those bullets ever hit us, which is just a miracle."

Theron's mother was faced with a truly horrifying decision.

It seemed to come down to allowing her father to continue or taking drastic action.

And in the end, her mother chose action.

"In self-defense, she ended the threat," Theron explained.

Theron believes being open is the best way.

"This family violence, this kind of violence that happens within the family, is something that I share with a lot of people."

And not talking about these issues leads to a feeling of silence and shame.

She also thinks speaking out about these issues helps others in similar positions.

It's clear the actress is an extremely strong person.

And, in spite of all the hardships she's endured, Theron has managed to come out the other side.

Theron is very much still has a huge presence on the big screen.

Not only is she slated for roles in several upcoming flicks, including the widely anticipated Atomic Blonde 2, but she's also a successful producer.

There are many strings to her bow.

And she has garnered a huge, global fanbase to show for it.

This week, in her usual candid and honest way, Theron has spoken out about her love life.

And she had some serious points to make.

It all started when her youngest daughter made a comment about Theron needing a boyfriend.

“2 days ago, I was in the car with my 2 girls, and my little one said something like, ‘You need a boyfriend,’"  the actress revealed.

Theron told her daughter that she is in a relationship with herself.

The actress went on to say there's a stigma attached to being single as a woman.

“There’s so much stigma around all of that stuff - this idea that somehow women fail when they’re not in relationships. Or that somehow it’s their fault; that they must be incredibly difficult, that’s why no man wants to touch them," Theron explained.

She hopes to pave the way for the younger generation of girls.

“And I hope that we’re raising a generation of young girls who realize that there is absolutely no shame in that game to be in a relationship with yourself."

"To not fall into what society kind of predicts for us as what is socially acceptable - if you are not in a relationship, somehow you’re a failure. Those are all constructs that we need to change."

We're living for this energy. For more on the star, scroll on to find out why she is advocating for gender-neutral award categories...