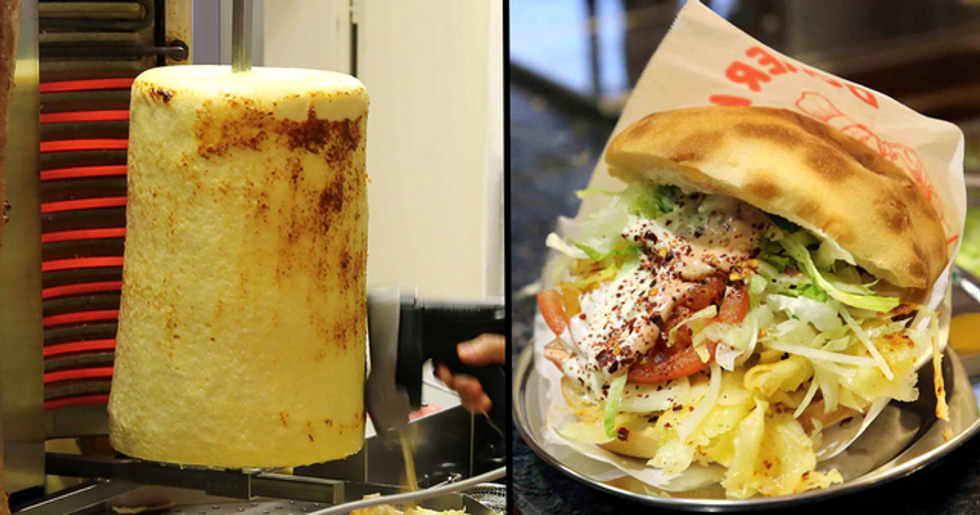 The Cheebab Is a Vegetarian Kebab for All You Cheese Lovers

For many people, kebabs are the perfect mix of meat, carbs, veg and sauces. But for all the vegetarians in the world who crave a kebab but don't want to give up their morals, there has always been a hole in the world.

But now there's a solution. The cheebab is the perfect, vegetarian alternative to the world of kebabs.

Kebabs plus cheese. Can you think of anything better?

Drunk eating is a rite of passage.

We've all been there. It's the end of the night. The evening's been packed full of Bud Lights and tequila. As you begin the stumble home you realise that there is something missing from your life, and that thing is food.

Kebabs are the kings of drunk-food.

Sure a portion of fries, a greasy burger, or any type of fried chicken, are all good options. But nothing can beat a half-decent kebab at the end of the night. It's a classic for a reason.

But what about vegetarians?

Vegetarians often get a lot of stick for not eating meat, even though it shouldn't matter what other people are doing if it doesn't harm you. In fact, vegetarian efforts are usually helping everyone, rather than hindering. Yet vegetarians face a life-time without kebabs. That seems harsh.

Steak, bacon, roast chicken; it's all delicious. On the other hand, animals are cute. It's all very confusing. But it's not hard to see why vegetarians might have an issue with eating sentient beings.

In order for medicine to advance, it is usually necessary to simulate the conditions with animals first, in order to not risk human lives. However, it is harder to argue in favour of testing cosmetics on animals.

There are ways of making farming more sustainable.

It is also hard to explain why they need to be packed into small, uncomfortable situations before they become meat on a plate, other than due to financial incentives. But when the animals are grass-fed and cared for properly, it more closely resembles the circle of life.

Are vegetarians saving the planet?

It is has been suggested that a plant-based diet would half the amount of green-house gases and pollution caused by food-production. Given the efforts that we are trying to enforce globally in order to save the planet, being a vegetarian seems like a fairly easy option to undertake.

What do Ellen Degeneres, Paul McCartney and Natalie Portman have in common? It's not often that these three celebrities would be put in a group together.

A chat show host, a multi-lingual actress and a member of the Beatles might usually seem to be at different sides of the celebrity sphere, but they all share a certain trait. These three are all vegetarians. That's right, they have all cut meat out of their diets.

Being a vegetarian used to be seen as an alternative life-style.

Free-speaking comedian and activist Russell Brand is the perfect example of a stereotypical vegetarian. People used to think of vegetarians as being alternative or radical, but it is increasingly becoming a normal and popular stance.

Some important historical figures were vegetarian.

Albert Einstein's theory of relativity helped us to better understand the structure of the universe. Rosa Parks helped initiate the civil rights movement across the United States. Steve Jobs invented some radical new technologies, including the iPod and iPad. All three of them have had a huge impact on the modern world, but they all hoped to keep their impact more positive by refusing to eat meat.

But now it's the new celebrity trend.

Being a vegetarian is no longer a fringe movement. So many celebrities are vegetarian these days that it might be easier to count the ones who still eat meat. Included in the list of vegetarians are both Chris and Liam Hemsworth, Miley Cyrus, Adele, Woody Harrelson, Orlando Bloom, Kristen Bell and Ariana Grande.

Athletes are getting involved too. A lot of people tend to say that we need to eat meat to obtain protein. So as an athlete, it is necessary to eat huge quantities of meat. But these days some big sports stars are going a different way.

Martina Navratiolva and Mike Tyson have both been vegetarian for a while, but they seemed like exceptions. Now though, the Tennessee titans have become vegetarian too. They still eat huge amount of protein, but they get it from things such as beans and pulses instead.

Luckily for vegetarians, they can keep cheese on the menu.

Despite the rise of vegetarianism and vegans, the production and consumption of cheese is still increasing each year. Last year, the US produced over 5.8 million tonnes of cheese. Over 25% of this cheese production took place in Wisconsin. That's one cheesy state.

Okay so we all know that cheese is fatty, but it does also have some positives. Cheese provides calcium and protein, but alongside unhealthy saturated fats and calories. The main problem is that people rarely eat small portions of cheese.

In short, no. However, cheese has been proven to help to prevent cavities. So if you ever find yourself stranded without toothpaste, see if there's any cheese nearby instead and you should be able to avoid cavities to an extent.

Some people think that cheese could help with weight-loss.

Some studies suggest that eating more calcium helps with fat-burning. It is also helpful because protein helps to keep you feeling full, so you don't feel like you need to eat as much. This is my kind of health advice.

Eating what we enjoy is key.

People often think that the best way to lose weight is to stop eating their favourite foods, but that is usually unsustainable. Instead it is better to try to eat a balanced diet and incorporate what you enjoy within a healthy lifestyle.

Dieting doesn't have to mean no cheese.

Rather than having to cut cheese from your life, there are many diets that allow you to enjoy cheese, although of course in moderation. The DASH diet (Dietary Approaches to Stop Hypertension) aims to lower or control high blood pressure. It focuses on incorporating certain nutrients, including calcium, while lowering others, such as sodium. As a result, low-fat cheese is fine.

The keto diet allows cheese too.

The ketogenic diet, known more commonly as the keto diet, focuses on eating fats. 75% of the daily calorie intake should be from fats, with 20% protein and just 5% carbohydrates. The idea is that the body burns fat instead of carbs, making it a more efficient way to lose weight. Although it allows cheese, it's still a tough diet to follow rigidly.

Then there's the original low-carb diet.

The Atkins diet has been around since the early '70s and grew in fame due to various celebrities enjoying it, most notably Jennifer Anniston. The main rule is no carbs. So you get to enjoy all the meat and cheese that you want.

Cheese is the universal language of delicious.

There are over 1,800 different types of cheese in the world. Britain alone produces over 750 different types. Although, it is actually Gouda that accounts for over half of the world's cheese consumption. Who'd have guessed?

Is it a coincidence that all the best meals include cheese?

Let's look at this sensibly. Up first, pizza. Approximately 3 billion pizzas are sold each year, and that's just in the USA. It means that Americans eat approximately 100 acres of pizza every day!

Then there's the staple foods.

Mac 'n' cheese. It's good old-fashioned American food. You can even buy it in a box without real cheese. Although given that American cheese actually doesn't count as cheese either, that sort of makes sense. That's right. American cheese is less than 51% cheese, and so has to be sold as a cheese product instead.

Everything works better with cheese.

Nachos, pasta, pizza, sandwiches, burgers, ribs. Everything tastes better with the addition of cheese. Or better still, if it's just the focus of the whole meal, like with fondue.

But there's one food which has always been neglected by cheese.

I'm sure you've guessed it. We're talking about kebabs. Kebabs are a beautiful invention that taste great at any moment, although obviously they hold special powers at the end of a drunken night.

Now we've got our answer.

Meet the Cheebab. As you have probably guessed, it is a kebab but with cheese instead of meat. It's genius. It seems so simple. Why weren't we told about this earlier?

How can we get our hands on a Cheebab?

The Cheebab has been invented in a Zurich dairy farm called Natürli. It uses milk from their own dairy farm, called Zürioberländer milk.

Unsurprisingly, the Cheebab has been a huge hit.

Following the success of Natürli's Cheebab, other companies have started opening up with a similar invention. What a wonderful world we live in. Cheese kebabs. Fantastic.

They are in addition to traditional kebabs.

The creator of the Cheebab, Roland Rüegg, is adamant that it is not meant to replace meat versions of kebabs. It's an additional option on the menu rather than a stealthy take over.

Now there's something for everyone.

Whether you're a vegetarian or a meat-eater, I think we can all agree that this is something that we need in our lives. Hopefully they'll make it over to America soon. Anyone fancy setting one up?