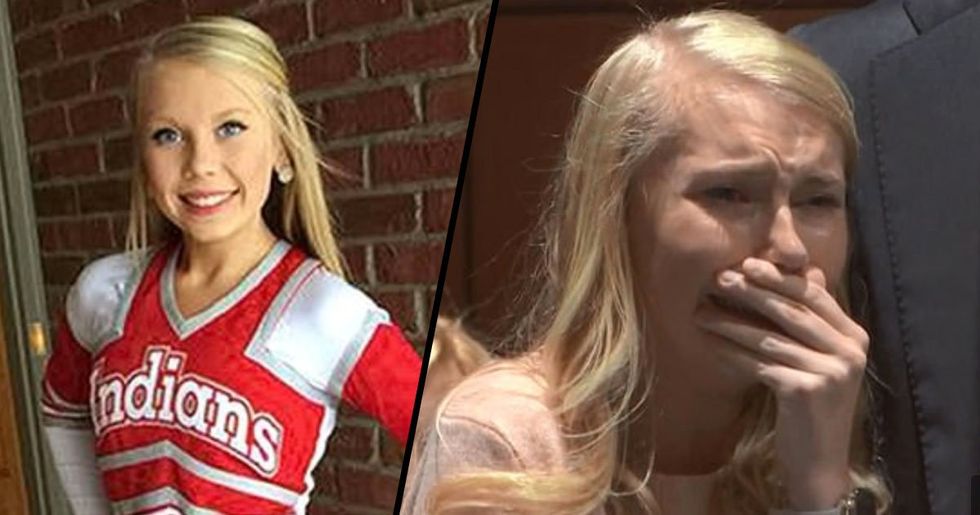 Cheerleader Who Buried Baby in Backyard Found Not Guilty of Murder

When it comes to the death of an infant, the punishment for those responsible usually results in life behind bars.

But depending on circumstances, the punishment isn't always as severe.

It has been reported that Brooke Skylar Richardson gave birth to her stillborn baby at home back in 2017. Her family were unaware of her pregnancy and, after panicking, she buried the infant in the backyard. She was arrested on a charge of aggravated murder and manslaughter, but news has recently emerged that she has been found not guilty by a jury.

Brooke Skylar Richardson is a former cheerleader from Carlisle, Ohio.

The now-twenty-year-old attended school in her hometown and planned to attend the University of Cincinnati to study nursing.

She had a reported obsession with appearances...

She was eighteen-years-old when she fell pregnant in 2017.

Whilst it is unknown who the father of the baby was, Brooke kept her pregnancy a complete secret and didn't even tell her family. She did have a boyfriend during this time, but he began dating her when she was already pregnant.

Her pregnancy was never suspected...

In similarity to Brooke, her mom, Kim, was also obsessive over appearances. It was reported by The Daily Mail that Kim was "obsessed" with her daughter's fluctuating weight and it was frequently discussed throughout her adolescence - meaning the pregnancy wasn't suspected as her weight was already up and down.

It was reported that she went to use the bathroom at around 3 am, and, in her own words, "a baby girl with pale skin came out." She said that the baby never opened her eyes or cried and, despite Brooke wrapping her in a towel and cradling her, there were no signs of life.

Brooke soon realized that her daughter was stillborn.

She carried the baby, whom she named Annabelle, downstairs and took her into the backyard, where she proceeded to take a garden spade and bury the baby. Later forensic evidence found burns on the infant's body and Brooke eventually confessed to partially burning her baby with a lighter in a panicked attempt to cremate her.

A concerned doctor spoke to the police after he believed that Brooke may have given birth to a stillborn due to the fact that she had failed to return for an ultrasound, blood checks, and other treatments in regards to her pregnancy. Police searched the family household, where they eventually came across the baby's decomposing body in the backyard.

The Richardson family had no idea...

Speaking to Cincinnati Magazine, Brooke's uncle, Jay, said: "Every single female member of our family is hurting, they are all beating themselves up over that." "They never guessed and they would have supported her."

After examining the remains of the infant...

The family were excluded from their neighborhood, refused into their local church, and endured abuse screamed at them in the streets. But all that Brooke's mom and dad want is for their daughter to be back home with them.

The family were experiencing high levels of stress and anxiety...

"I still wake up in a cold sweat thinking that Skylar [Brooke] is going to be taken away," Kim said in an exclusive interview with The Enquirer.

The trail was never going to be straight forward...

It was believed from forensic evidence that the baby was, in fact, born alive, healthy and well. The corpse displayed evidence of a smashed skull along with the burns that Brooke previously admitted to inflicting upon the baby.

Prosecutors were convinced that the baby was alive...

The Daily Mail reported that they claimed that Brooke had set fire to and killed her because she did not want her to intervene with her "perfect life."

A psychologist testified in Brooke's defense earlier this week.

He said that Brooke had been sexually abused at the age of twelve by a boy who "she trusted" and "looked up to" and that this had ultimately given her a personality disorder, alongside her eating disorders.

The personality disorder made her "eager to please."

However, prosecutors objected to the testimony, claiming that it was irrelevant, particularly after a photograph was shared of Brooke posing for a selfie in the mirror 2 days after giving birth.

Brooke insisted that it was the panic that led her to bury Annabelle...

She eventually began to acknowledge that her baby may have, in fact, not been stillborn. In interviews, she admitted to perhaps "squeezing" her too hard, which may have lead to her accidentally killing her baby daughter.

On Thursday, the jury made their final decision.

She was, however, found guilty of the offense of gross abuse of a corpse.

She will face a maximum of 1 year behind bars for this offense, but in comparison to life behind bars, this is absolutely nothing.

Brooke wept in court as her parents stood behind her...

Her mom can be seen whispering to her: "I love you baby, it's going to be okay," as the trail came to an end.

There is mixed opinion on Brooke's sentencing as many believe that she deserves to serve a much longer sentence for what she did to her infant daughter. However, the evidence found has clearly been deemed enough to prove Brooke to be not guilty of murder, manslaughter, or child endangerment and we can only hope that her time in prison will rehabilitate her and give her time to reflect on her actions over the last few years.